It all started months ago when a fast ultra runner friend of mine heard I was planning to do Barkleys Fall Classic and/or UTMB/OCC this year.  Jake Dinardi said if you are really series about training for those then I know a race director that has put together a course with a fairly high ‘suffer index’. That conversation lead to friending the RD on FB, some messages exchanged and ultimately Aaron Sorensen added me to the ‘closed’ FB groups after I registered on ultra signup even tho technically the race was closed. Thanks Aaron … I thought at the time!  Thus began my training for my first ‘off trail, self supported mountain orienteering’ race. 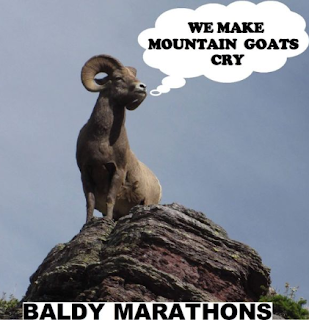 The Baldy Marathons is modeled after the infamous Barkley’s Marathons which is a 100+ mile endurance race over rugged backcountry without directions or support.  In Barkleys no GPS is allowed and the exact course, start times, etc are all up to the RD and famously change each year.  In Baldy, it is similar except that that the RD provides course, rough punch locations one hour before you start and has fixed start times; highly recommends you bring a GPS device and do as much planning via topology maps and in person course explorations as possible.  The full Baldy is technically five, 20 mile loops where each loop has 10,000 ft of vertical gain.  That’s 100 miles with 50,000 ft of gain.  To complete a loop you need to find particular ‘punch’ locations where you punch B.A.L.D.Y sections of the punch card.  If you miss a punch or don’t complete a loop under the cut off time (roughly 13.5 hours) you can’t continue for an official finish.  The punches them themselves could be under rock or hanging from a tree. There are no aid stations, there are no ‘sweepers’, it is a figure eight course where you better make it back to ‘base’ otherwise you are coyote food or whatever is native to San Gabriel Mountains.  Oh, and the terrain is nothing you have ever experienced before … ever.

After studying the terrain the best I could via caltopo dot com, installing Gaia GPS on my cell phone, my plan was to arrive a couple days before the start on Saturday morning to acclimate to the Tahoe like altitude and do a recon hike up to the start of the race.  Yes, the doesn't start at the base of the ski lift.  Of course the start of the race is at the TOP of the ski lift.  From the image below, as you come up Baldy Rd, you will pass Manker Campground, then an open parking area by a restroom which is a popular trail head, or you can drive switch backs up to the ski lift.  For pre-race day hike the trail head is handy and you can chit-chat with hikers and/or hike with them to falls or Baldy Summit.  Or, you can pretend it is race morning and park at the ski lift cuz that is best location to stage your aid station and hike up the ski lift to Aarons Pad aka Top of the Notch restaurant.  It is about 0.8 mile hike straight up sandy/shale and ~1200 ft climb.  A good warm up of things to come.  Lift tickets are $15 one way or combo up and down for $25.  We asked the lift worker if we could use the ticket down the next day thinking we'd use it to come down after ~20 hr loop and he said 'no problem'.


I did a test run coming down some truly scary scree area just to get it out of my system and to practice 'Baldy Scree Skiing'.  Two things are a must to wear.  One are gators to try to keep all of the dust, pebbles and dirt out of your shoes.  Second and most important are a good tough but light pair of gloves as you will not only face mountains of sharp rock but mountains of thorn bush. 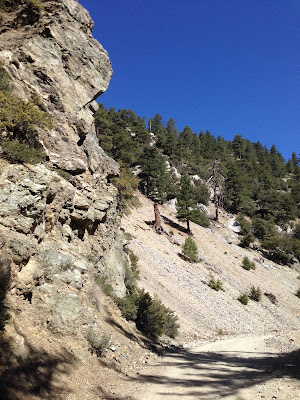 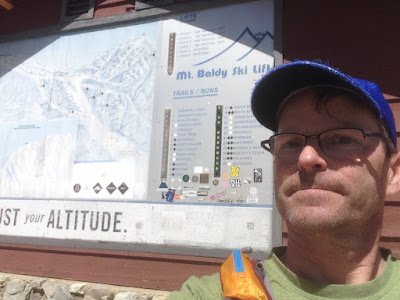 I stayed at an inexpensive hotel near the Ontario Airport named Gateway Convention Center which was between 30-40 min drive to the Baldy ski lift; so, I had plenty of time to get up, have breakfast and drive up.  I happened to park next to some ultra runners from Utah named Jeff and Queintin. They were the ones that recommended I get the route trip lift tickets for $25 and it would turn out I'd spend the entire day with these fine gentleman.

After a quick lift up to Top of the Notch aka Aaron's Pad, I arrived well before the 8AM mandatory briefing start and had time to socialize, meet Aaron, Ginny, Matt and Howie.  Plus met some really cool dogs.  Aaron presented us with his hand drawn maps indicating the punch locations and many newbies were busy updating their personal maps and/or asking Aaron specific questions about the route.  Aaron did provide many tips and tricks to stay 'on course' which was code word for taking the most sane route, not getting lost and having to waste lost of time backtracking or going up/down much harder terrain.  Apparently we didn't listen very well.


The batch of 50k'ers started promptly at 9AM 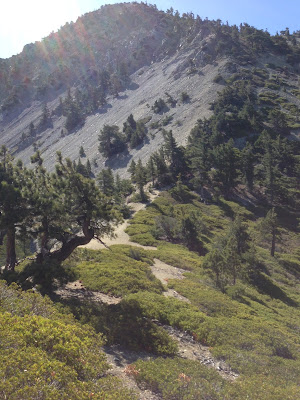 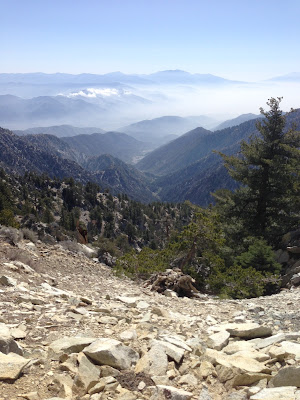 Nope, took detour to see if we could take a short cut so we wouldn't need to run along the very top of ridge.  Yup, taking the right lower slope was a very bad idea and lead us to dangerous rock slide and at least an hour delay.

Over shot the turn to hades so had to worm our way down more scree and great fields of dead pine cones until we got down to the valley.

There is one creek to refill your hydration pack.  I started with a full two litters, had 1/4" left and forgot to refill here.  Luckily the three I hiked with carried the recommended four (4) liters and I survived. I estimate I used three liters of water over 10 hours.

My oh my.  We watched the videos, listened carefully to Aarons tips and tricks to get across the Thorn Bushes from Hell but not well enough.  We didn't go 'right' enough and instead ended going up straight towards the twin trees but got snagged about 100 ft short.  There were three options, go back down and wiggle more tot he right, power on straight up or take what looked like clearer scree field to left.   We choose the 'easier' path to the left.  Not only was it definitely not easier but it forced us to go through 10x the number of thorn bushes than needed.  We ended up above the twin trees and lost at least 1-2 hours here. 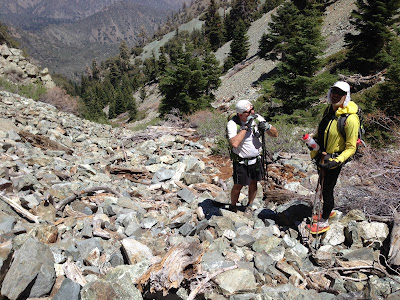 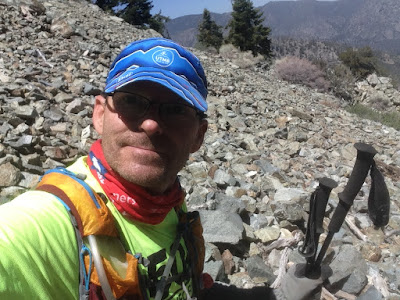 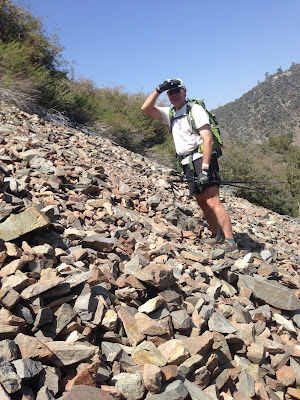 
Was actually a beautiful hike up about 2000 ft to the next ridge, then left turn down to Aaron's Pad.  You could see Eric's Plunge, Satan's Ridge, Hades all from this view.  It's just amazing to see from a distance what we had just come down from. 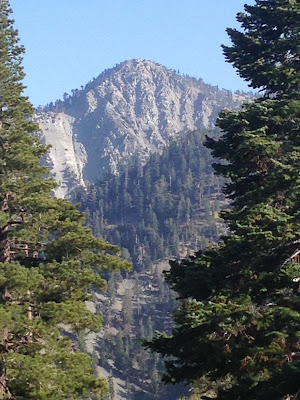 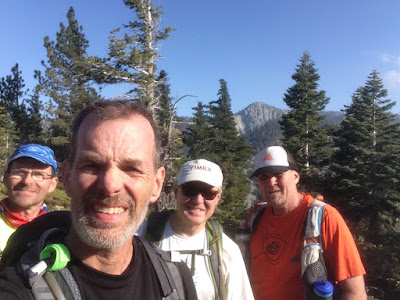 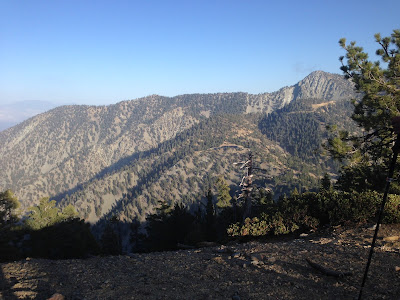 Back to Aaron's Pad (Half loop)

If you are looking for a 'Barkley's like' race on the west coast that is going to make you work for every foot, you really have the need to suffer, then this is the race for you.  Would I do it again?  Yes, someday I'll do it again cuz the first pass is to learn the course with the understanding that you'll be back to do it better!  I'd like to thank again those that helped me complete half of the course : Jeff, Quentin and Al!  And thanks to our host Aaron!