My Execute Director called me into her office and informed me that we'd be traveling to Denver, CO for mandatory managers all hands to go over 2018 initiatives, etc.  Internally I groaned since the last thing I needed as we enter the busiest time of the year for us is to be distracted by what might be coming next year!  But a thought struck me. "What IF by some small miracle there was a cool trail race around the time I happen to be in Colorado?"  It as in mile high county home of famous cycling and trail running territory.  So, I hit halfmarathon dot net and several other well known race calendars and I came across an odd race a bit far from Denver in a funky place called "Copper Mountain".  I hit the race director's summary of the race that it starts at 9745 ft and peaks at 12,040 ft. See link here.  OMG - this was not your everyday run along the beach or local state park in California. Not even by Tahoe standards.  This was a Rocky Mountain race at an average 10k ft. Oh heck yeah where is the registration page cuz I'm in! 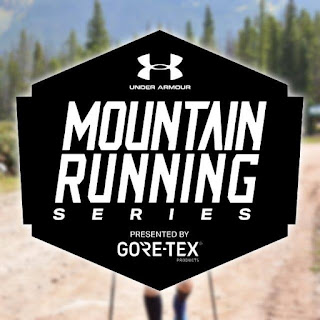 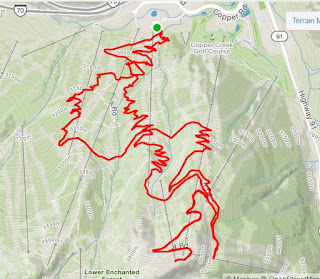 Having completed the Tahoe Rim Trail (55k), I knew that I'd need to acclimate in some intelligent manner over several days otherwise it was not going to be pretty attempting to run at 10k. So, I planned to stay at 6k (Denver, CO) from Tuesday until Thursday and get at least one run in.  Then on Friday travel to Copper Mountain, CO (10K) to get a run in before the next days race.

Before diving into all the race stuff. Let's talk about the how modern downtown Denver clashes with its surrounding mountain ranges.  Not to disrespect anyone beloved city.... but ... Downtown Denver currently reflects all of the nasty things you'd expect to see on Height-Ashbury (HB) on a bad day in San Francisco.  Half of downtown is either under construction or over run with stumbling x-generation totally high on the legalized local Marijuana.  Yes, there are all the big name hotels downtown, Coors Field, a really nice botanical gardens.  But I just couldn't get past all of the pot dispensaries, teenagers and 20 somethings hanging around on 16 ave and pan-handlers.  I mean If I wanted to experience all of that I could easily have made the 45 min BART trip to downtown San Francisco or HB.  So, we really didn't like downtown and couldn't wait t get away.

Side note.  There is a lesser known area of Denver called LoHi (Lower Highlands).  That was totally cool and probably where all of the local live, play and commute from towards downtown to work.  It is just a mile or so west of downtown, across the river and freeway, but a world away.  There are lakes to run on, 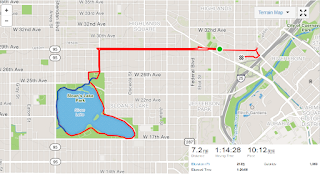 and on the way back I found a car wit #Pathetic Triathlon and full iron man stickers ! 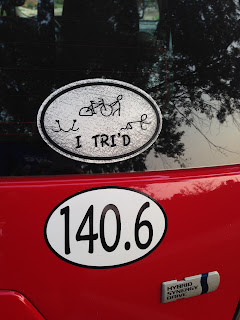 a totally cool restaurant on top of an old Mortuary called Linger and an ice cream place on the same block.  My wife and I REALLY liked LoHi. 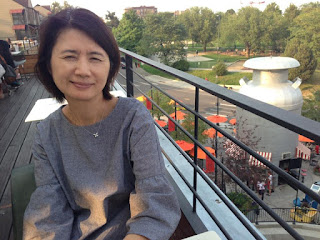 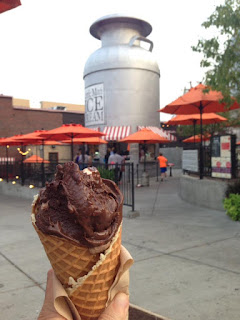 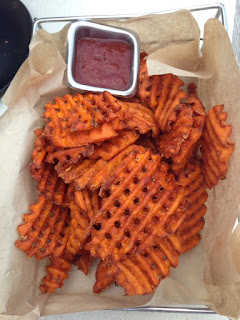 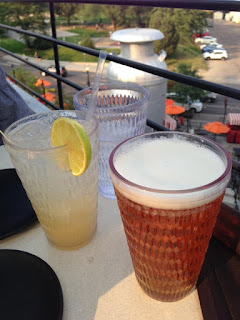 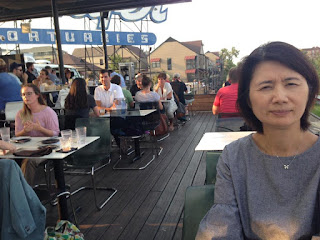 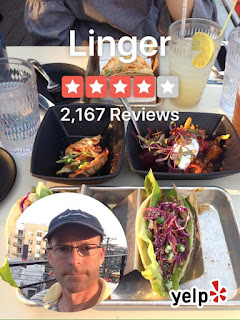 It's now Friday, the day before race day and we are on our way 80 miles westward towards Copper Mountain.  I've already talked with CuMtn staff that it is off season, that most restaurants and services will not be available and I should check out Frisco about 6 miles on the way.  What? Frisco? Like San Francisco? Aw God not another Pot-head scene like downtown Denver.    OK, it wasn't in fact Frisco is super cool and reminder me of an alpine village in the french alps (think Chamonix, France).  There are tons of small cafes, restaurants, pubs, flower lined walk ways all surrounded by the Rocky Mountains.  We highly recommend visiting Frisco and spending an afternoon walking up/down main street, having lunch, then walking along one of the local tails. 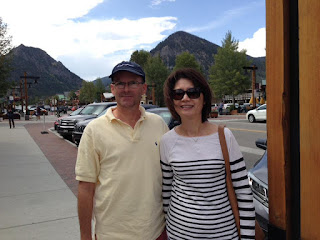 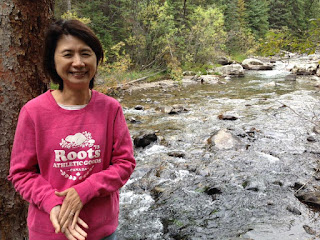 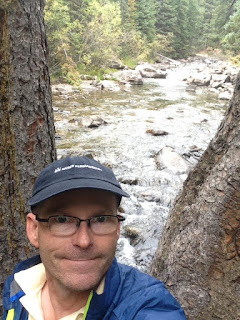 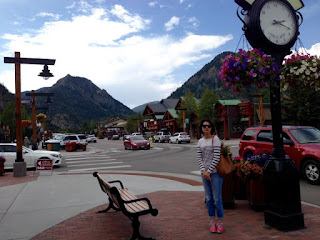 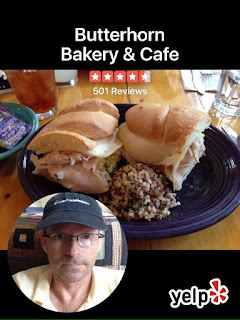 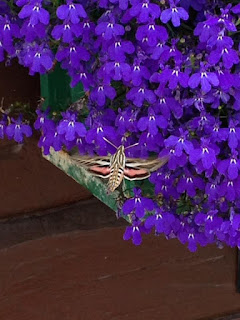 OK, OK, What about CuMtn the host of the Under Armour Mountain Race series.  Another six miles from Frisco we roll into CuMtn and after a few false starts get all settled into our condo then venture 20 feet to the registration table.  Yeah, we can almost see the start arch and finisher area from the condo.  Friday night was pretty light with only a few early birds like me picking up bibs and vendors settings up tents, etc.  It looks like Heavenly or Squaw Valley but a bit more laid back.  Not a bad vibe at all and can only imagine what the place is like during peak ski season.

I get my bib and really nice UA long sleeve technical shirt.  We go back to Frisco for dinner at a nice Italian restaurant then crash for the night.

The half marathon starts at a lazy 10AM but I get up early just because I'm used to it grab breakfast and see the 50k off. OK, I secretly wanted to line up with the 50k and run off with them cuz I've done a bunch of 50k.  But, at 10K reality kicks in and probably not a good idea unless I actually trained at elevation like these folks most likely did.  Gave them a big, loud California send off. 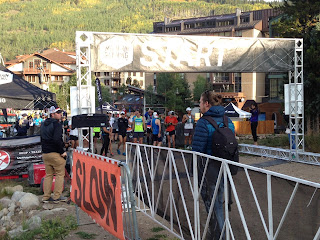 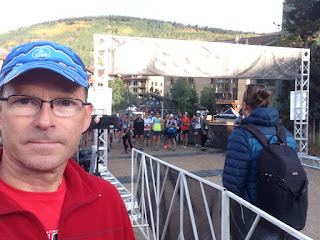 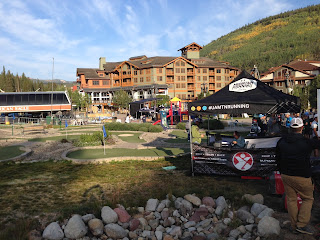 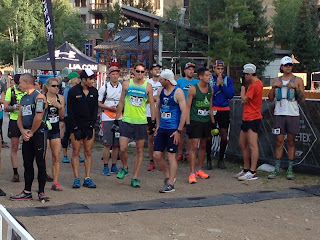 I don't have ANY on course photos because I was totally concentrated on keeping on course and not repeating my mistake at UTMB/OCC by being distracted by the beautiful vistas such that I missed critical cut off times.  So, I apologize but not photos nor videos.  You'll have to take my work for it that the course was ridiculously well marked with markers every 50 ft, drop dead beautiful panoramic views of the Rocky Mountains with trees in every shade of green.  Strangely even at 12k there was no snow. None at all.

The Half Marathon course was REALLY simple.  You run switch backs following a ski lift up, up, up, more up until you reach a summit then down, down, down until the finish.  Up really sucked and my heart rate even power walking hit a ridiculously high 185 BPM.  There were four Aid Stations (AS) every 3 miles and they were well stocked. Not much to comment on the 'up' other than it went on forever.  One cool thing was that ALL distances went over same route so you were looped by marathoners and 50kers which was cool opportunity to encourage elites on.

After you finally reach 12k feet at the very last AS you really want to stop, catch your breadth and take some video.  But, I didn't. I thanked the AS volunteers, stepped over the tracking mat then started the much anticipated decent.  Yup, ~3000 ft of decent over about 6.5 miles. Yee haw!

The decent was what was expected and more.   Yes, it was gorgeous single tree covered single track and ALL down hill.  Then, just when you thought the mountain didn't have any surprises for you it started pouring raining.  The slope was such that the earth couldn't adsorb any water so now you were bombing down single track in about 2 inches of brown water run off.  THEN, the wind started then pee sized hail started pelting your skin and face.  Yes, this was mountain running. 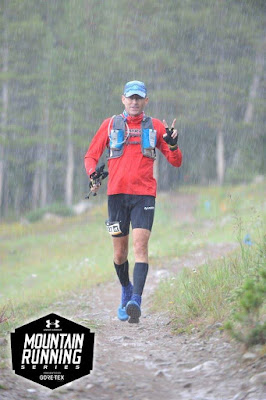 I offered my Outdoor Research Helium II rain jacket to a young runner in a sports bra that was being pelted by hail.  There were many bonding moments when the lighting, thunder, hail then wind started.

Dropped many on the single track down cuz single track on a decent are made for bombing.  Finally ran up on a shirtless 20 something that was having a tough time.  He was from Virginia on a birthday weekend and was running a trail race at elevation for the first time.  This kid had balls of steel.  I ran with him for several miles then when we heard the finish area, I asked him to sprint ahead then I chased after him for the sprint to the finish.  We high fived, wished him happy birthday then got my finish beer. 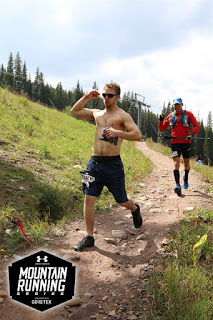 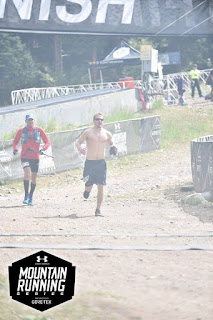 I finished back of the pack just like I started but 5th in  my AG.  Fine by me!  I'd love to come back and do the 50k.  Its a great well supported race at a nice resort area surrounded by the Rocky Mountains.

I'll leave you with the best finisher Seafood Pho I've ever had. It happen to be in Frisco. 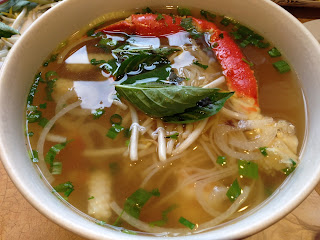