For years my favorite recovery activity besides walking the family dog has been cycling.  Immediately after a trail race or road marathon you just want to pass the finish line, high five friends and family then lay down with a beer in your hands.  Your legs are normally toast and you just want to not move for awhile.  Then there is the day after stiffness.

I found that if I walk the dog then go for a bike ride the day after and get all that blood pumping thought my body that I immediately feel much better and can start training again sooner.  This foot race / bike recovery pattern has repeated itself over and over again till I started doing weekend hill work outs on the bike just for fun.  Locally, my favorite ride in East Bay Area is the ~30 mile/~2200 ft Palomaras Loop (Strava Link).

Last year I did my first Duathlon (5k run, 20 mile bike ride, 5k run) and loved it. See Wolf Pack Events if interested. Started doing bike/run 'Brick' work outs to fine tune transition times and work on my cycling skills. One note is that per USAT rules you cannot draft other cyclists and have to leave a safe distance (7 meters x 2 meters).  And, if you pass you have to pass within several seconds or give up. Otherwise you could earn a '5.1 Position Foul' and be penalized time or DQ'ed.

Last month I participated in my first Triathlon. Loved the bike and run, barely survived the open water swim in 55 deg F water (27 deg F ambient).  I spent a far amount of time in the transition area checking out peoples tri bikes. Man I could have spent hours just looking at bike setups and asking questions.  Follow this link to learn more about HITS Napa.

Queue music and decision to participate in first bike race.

I knew I wanted to participate in a pure bike race to see how 'real' cyclists setup their bikes, what pre race rituals they go through, how they ride and how they hang after a race. I mean I've been racing trail races for years now and know the cool vibe you get from the local trail community and am really curious how cycling race events are like.

I searched local bike races and found quite by accident the 30th Annual Wente Classic here in neighboring Livermore.  Wow, only 15 min drive away and the course includes Flynn and Patterson Pass which I've trained on.  I quickly signed up for the race after registering with BikeReg.com to get my License number and confirmed age and default category of road beginner (Cat 5).

I got up 3 hours before the scheduled start of my pack 8:30AM which made it 5:30AM to have breakfast with coffee (my standard).  Put on my riding gear and a light jacket and was out the door my 7:30AM.  Arrived 7:45am to see that all of the near parking spots where taken by folks who got their earlier and even out of state campers!  Walked 1/4 mile from where I parked towards the start area and was in awe of all the really cool bikes and setups that people had prepared.  They had mats setup up with stationary spinners to warm up, igloos with snacks and all arranged in team packs. Folks were personable but not super interested in talking to non team mates.

8:10AM time to make some warm up laps around the neighborhood to get rid of pre-race jitters and make sure that all equipment was in order. Check, check and check.  8:20AM glided over to see the Mens 35+ Cat 4/5 and cheer them off.

Finally at a little after 8:30AM our corral moved up to the start line and conversations and advice were intense: "Make sure you stay with the pack", "If you fall behind on a climb, you'll never regain the pack on the descent".  I nodded like I knew what the heck they were talking about. Just smiled and hoped i wouldn't look too out of place.

OK I'm going to chat briefly about the 'pack' that took off before pointing you to the most excellent drone video below of the Cat 1/2 Men 'pro' cyclists caught below.  Must view for those not familiar with the Altamont hillside in early spring or want to scope out the race course visually before training on it.  OK, all 43 riders in our stage ride out at the same time and to my surprise stick together in a really tight pack.  I'm middle rear about 1 foot to the left of the wheel in front of me and if I look down I see two wheels on both sides of me.  Oh man, I'm thinking this is weird and I'm getting mildly claustrophobic.  There is a motorcycle in front and one in back leading us in the road as we make our way North towards Flynn.  I hang with the group at a casual pace for several miles then as we get towards the first big climb (Carrol Rd) I slowly drop back and out.  I slide out of the pack and towards the white line to see the rear motorcycle rider signaling me.  I can't hear him but basically guess he is asking me if I'm dropping from the pack and I signal 'yes'.  For the rest of the race I'm solo just doing a fast training ride really low and aerodynamic as I can and see the 'pack' slowly inch way along the rolling hills.  The only rule per se that was addressed over and over again and was "if you pass on or over the center line you will be DQ'ed".  There were many corner marshals making sure we made the right turns (and didn't cross center lines); except Near Fynn Horseshoe otherwise if you didn't slow way down or cross the center line you were going into the bales of hay provided!

I didn't take any video or pictures for the next three hours as I was fighting to keep a descent pace, keep hydrated and eat while riding and navigating the course.  For hydration I had two full bottles of just water which I had already calculated would last me the three loops (one hour per loop for me).  The pros had staging after Carroll Climb to swap out single water bottles (smart as that reduced weight big time). I had three Hammer Montana Huckberry gels taped on my bike frame Triathlete style ready to go each loop basically 15 min before I had to climb that damn Carroll (9%) ascent.

First loop was fun, second loop I felt a little resistance and by third loop my quads were not happy and I was in my saddle on the slightest ascent.  There are two climbs : A long Carroll (9%) ascent already mentioned and a short 'Bump Sprint' at Cross that is a nasty 15% but there is a small downhill to gather enough speed so you don't have to suffer long.  The course really isn't that bad but three loops was enough for me.

During my training runs I did first loop in one hour, second in 1:15 ad dropped on third because of crosswind.  I was very happy with  my time and basically only spending one hour per loop each loop.  Average pace was a little low at 13.6 mi/h, but Cadence and max speed was all as expected.  I know I need to work on climbing to be more competitive and will be doing more climb drills as well as squats, lunges, etc. 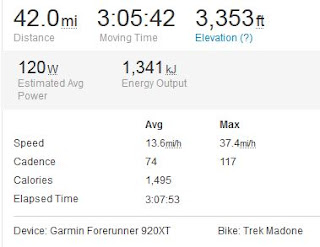 Final notes on community differences between trail an cycling races.  I run North Face Endurance Challenge (NFEC-CA) every year which offers prize money to top finishers and attracts top trail runners from all over the world.  However, the trail elites are very friendly, accessible and you will see them having a finisher beer with others.  However there was no 'finish' area per se at this race event other than a podium and line to pick up awards.  Most cyclists stuck to their team mates and relaxed by their cars/camps.  There was no finisher food, nor beer.  There was one sponsor (Hammer Nutrition) that offered sample drinks.

After a recovery walk to the 'finish area' to chat with other rides, I walked back to my car, packed up and drove to 1st street Ale House to have my own finisher celebratory burger and more importantly Altamont Hella Hoppy IPA! 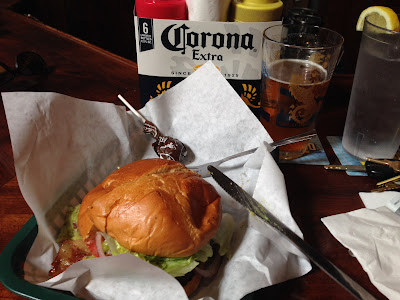 I was joined by Kaitlyn and Dawn at the bar where Kaitlyn had just returned by cycling Mallorca in Spain.  She had noticed my Forward Motion Jersey / race number and related to me how she used to run with the group on Wednesdays from the store in Danville and Weekend treks up to Mt Diablo from St Timothy's.  This was the best way to end the day.  Would I sign up for another 'real' race with real cyclists?  Hell yes!  It was well supported and fun.  Next time I plan to bring a Canopy,  bring my own finisher beer, friends and chair to sit to soak it all in.  I may also suggest additional sponsors like I dunno, "Altamont Beer!" 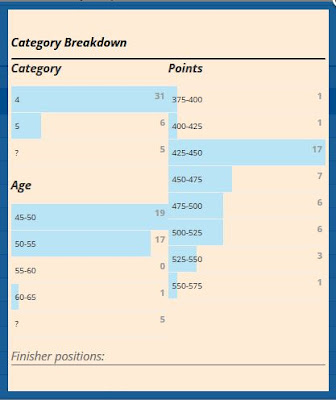