I’ve run a couple races in Taiwan before. Both road races in June. A 12k and half marathon (22k).  I could only get two weeks of vacation from work because of commitments but really wanted to find a trail race amongst the lush rain forest like conditions.  To my surprise, the Taiwan Beast Runners(TBR) had a UTMB, UTMF certified ‘loop’ race in just the environment I sought after – or so I thought.

April in Taiwan has generally speaking for a sub-tropical island ‘nice’ weather in that there aren’t any monsoons nor is the weather too hot nor humid.  However, I knew that the humidity and timezone difference were different enough that I would need a few training runs to acclimate. So, I started the very next morning with a 10k then added 10k per day for three total workouts (10k, 20k, 30k*).  My last workout was cut short because what was supposed to be a dry day turned into torrential rains so only got 15k in.  I must say that my first work out the day after I arrived was tough. I mean a 10k should have been easy to knock out but I had to push my legs to finish. However, by the second day I ran a 20k with ease.
The 3AM bus pickup area.  I located the pickup area which was Taipei Main Train station East exit 3 and minutes from my mother in law’s house on Google Maps and thought easy.  I showed the map to my wife, then mother in law which promped a family walk using mom’s route to the train station. Mom’s route was most efficient of course because the MRT underground would be closed at that time, had to use surface streets and was easy enough to cross ‘no crossing area’ at 2:45AM provided you were not picked off my early morning race car drivers.

I set my alarm for 2AM, packed my race pack, post-race backback and had my morning bagel ready to go.  This was the one time in my life that I was thankful for jet lag since I was mostly able to fall asleep at 9AM and work up easily at 2AM.  I was out the door by 2:30AM and reached the designated pickup spot by 2:45AM following Mom’s route with ease. Half the battle in a race is just getting to the bus / start on time. Check!
There was only one bus waiting but checked the bus number anyway. 693-YY. Yup. 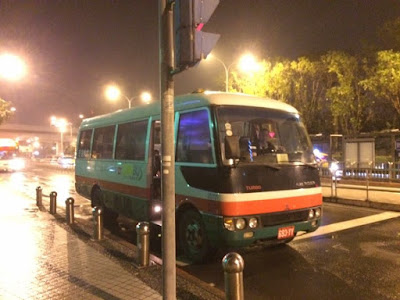 Got on board and found about 6 runners already on the bus. All half asleep.  One thing I  noticed was the bus was tiny and later found out why. The roads get progressively more narrow and twisty the further from Taipei we got.  Until at one post even the tiny little bus had to do some creative ‘y’ turns just to get to the temple where we would call base camp. The ride took 2 hours and was bumpy as hell.
The temple was the usual type of Buddhist temple you find out in the country side and had a gorgeous view of mist covered mountains.  Sunrise is 5:30AM this time of year so we were treated with a spectacular sunrise with blood-red sun.  The strange thing was there were cars parked on the main deck but no humans.  Later we were directed to the lower ‘parking’ level were we saw a true base camp complete with car campers, tents, and ginger tea brewing on the stove.
We were issued bibs, race Ids, plus the schwag that came with registration or extras that were bought.  The buffs and shirts were quality and looked cool.  We lingered, some caught a nap, had some breakfast and were all slowly getting into the race. It was still 5:30AM with race start at 6AM for (50K+), 7AM for 25K.
Up from the parking garage to the top for instructions from the Race Director (RD) and photos.  RD said the first 14km or so are ‘technical’ then the rest of the 25km are runable.

25 km loop, where each loop has about 4000ft of vert according to my Garmin.  This is a semi-autonomous course where you are expected to pack enough fluid/fuel for one complete loop.  There was one 'check point' at 14km where there was water, food (even beer) but you we not supposed to depend on it. [I loved the freshly cut guava!]

Cut-off times:
I'm  not going to spend much time talking about the turn by turns because I couldn't even if I wanted to!  The streams, waterfalls, animals paths and occasional roads were in Chinese and I was spending too much time finding the next ribbon and just not falling on my ass.  Here is a 'you are here' sign I found that gives you a rough idea where we were (see Guide Map below).  This was taken past half way on the easier route back to base camp which I believe is FuDe Temple. 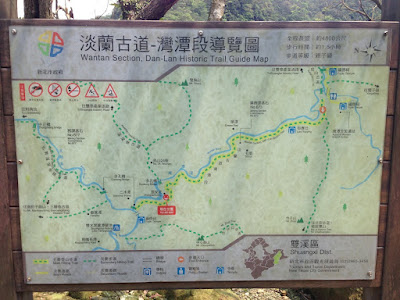 The lush, green (and wet) picturesque landscape is hard to capture in words and certainly a sight to behold; especially, for someone like myself from a dry state like California.  There isn't a patch of earth or stone for that matter that doesn't have a world of flora and fauna fighting for dominance.  Really beautiful.  Take this lovely stone. 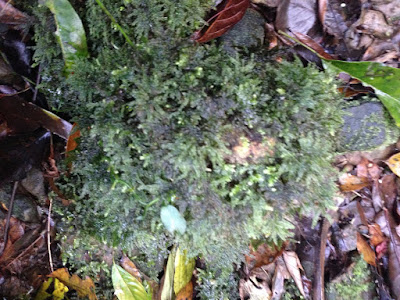 Please take it! It was so beautiful it was initially hard to step on it then you realized that there were hundreds of them and they represented the sanest way to get up/down that stream bed.  Unfortunately, the beautiful little slippers of algae were incredibility slippery even in my Hoka stinson trail shoes.  Trying to find places in between these pretty stones was even more treacherous because if you didn't get your ankle twisted it was all mud.  There just wasn't any 'easy' way to move along the course except with your arms out and at a tempo that you could recover from if you slipped.

Enjoy this slideshow of the lush and picturesque Taiwanese landscape in April!

Enjoy the pictures!
Posted by Scott Noack at 4:45 PM