Maybe it was because I entered into the MHM with such low expectations for the event (not my performance but will get to that later) that I really enjoyed the race.  A fellow running friend by the name of Andrea had a bad experience with the course last year for a number of reasons:
This year (the race companies fifth year) I think the RD et al had made a number of important changes including creating a bib mailing option for $10 where your bib was mailed to you the week of the race and you were able to pick up your tech shirt (and bag) at a special VIP tent.  Very cool.

The course can be broken down into two halves.  In the first half you run along rolling rural roads from one reservoir to another.  Very peaceful and there wasn't much car or bike traffic at all.  Then, by mile 14 you enter the flats and eventually back to the small city where you zipzag residential streets.  There were chalk marks and sufficient volunteers to help navigate the route but you do a bit of meandering.  Obviously I loved the first part and second part was just OK. Total elevation gain was around 1073 ft. 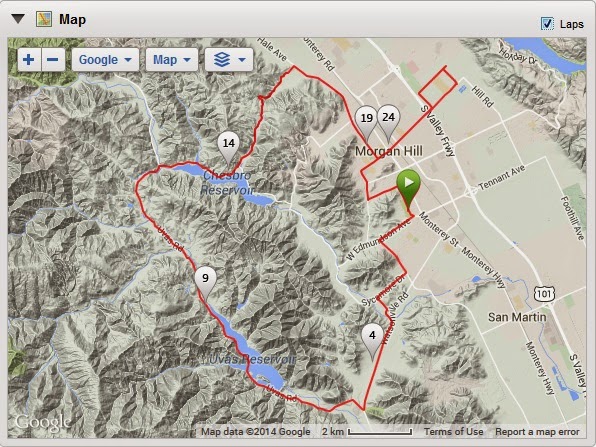 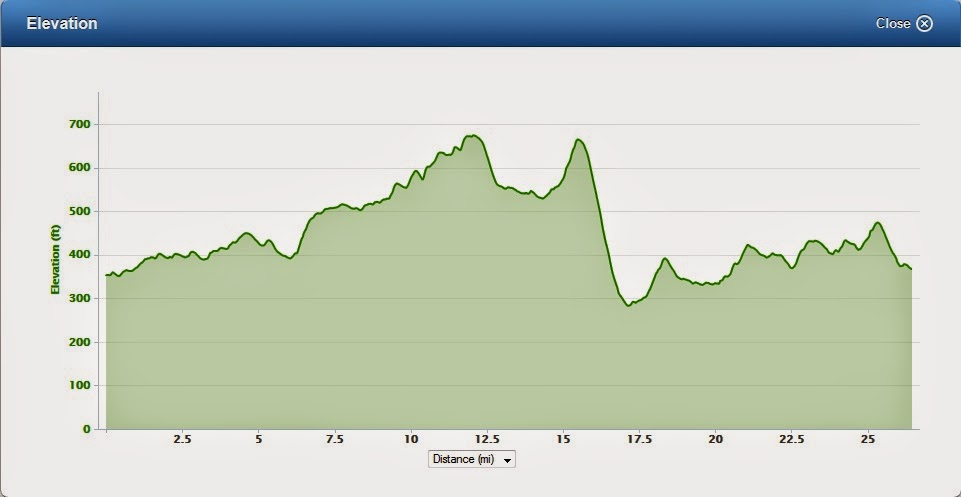 In general I didn't experience any unhappy cowboys taking out their road closure frustration out on runners.  To be honest, MHM is a small race with 1700 total runners in all categories and as runners spread out naturally by their paces there just wasn't that much congestion.  However, there was some kind of cycling race that day and there were some cyclist cycling a bit too fast and one that went down hard enough that paramedics has to carry him away.

The weather was just excellent. Cool 50s in the morning with slightly warmer pocket areas higher in the mountain (60s) but with pleasant breeze.  I think the forecasted temperature range was 45-65 for the day. 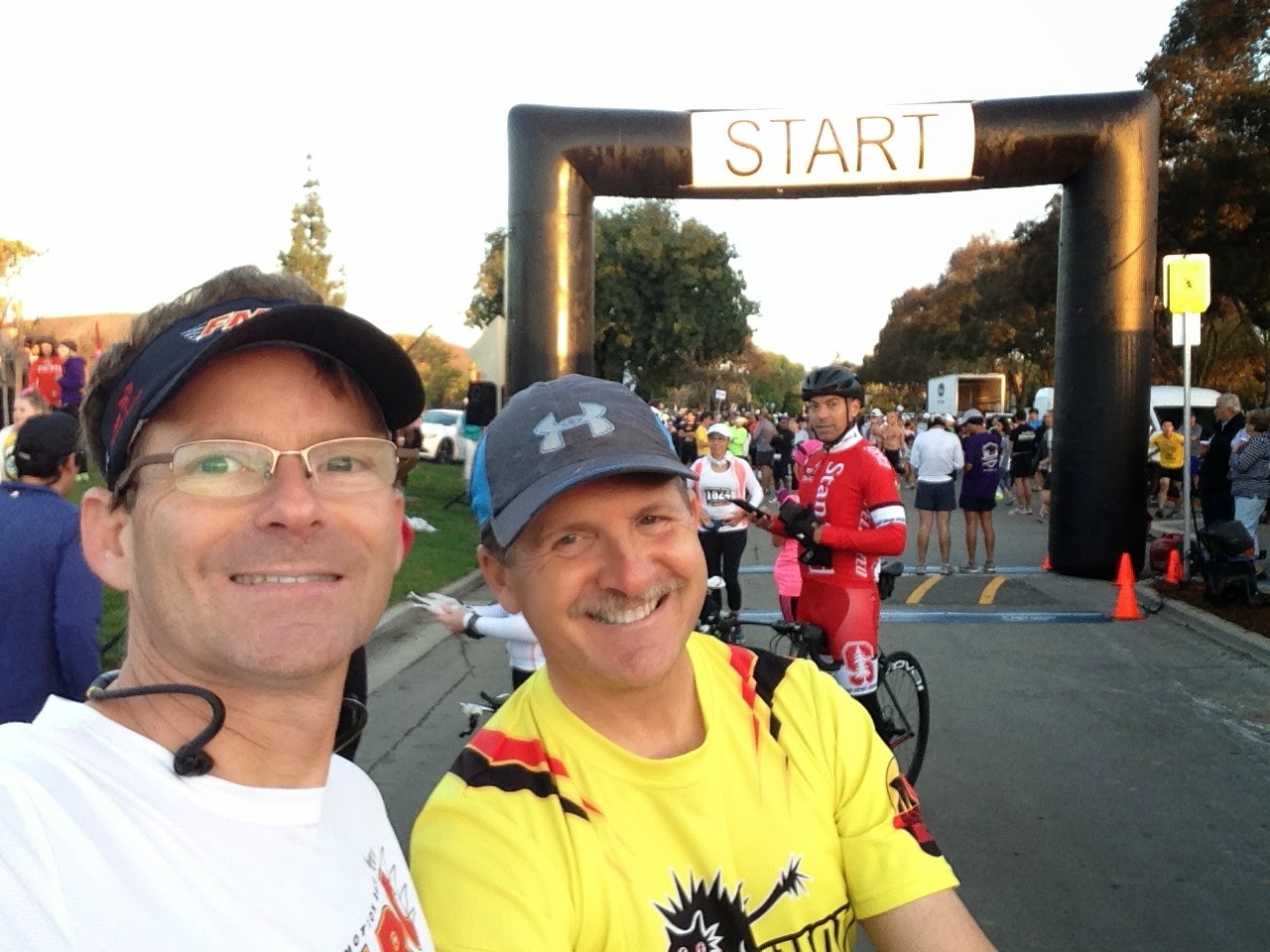 The finishers table this year was pretty good with fresh strawberries, bananas, choice of vegi or chicken burritos plus the usual snack foods. Race bling included shirt, medal plus bag with pasta, recovery beans, etc.  If you choose 'VIP' mailing you got tote bag. 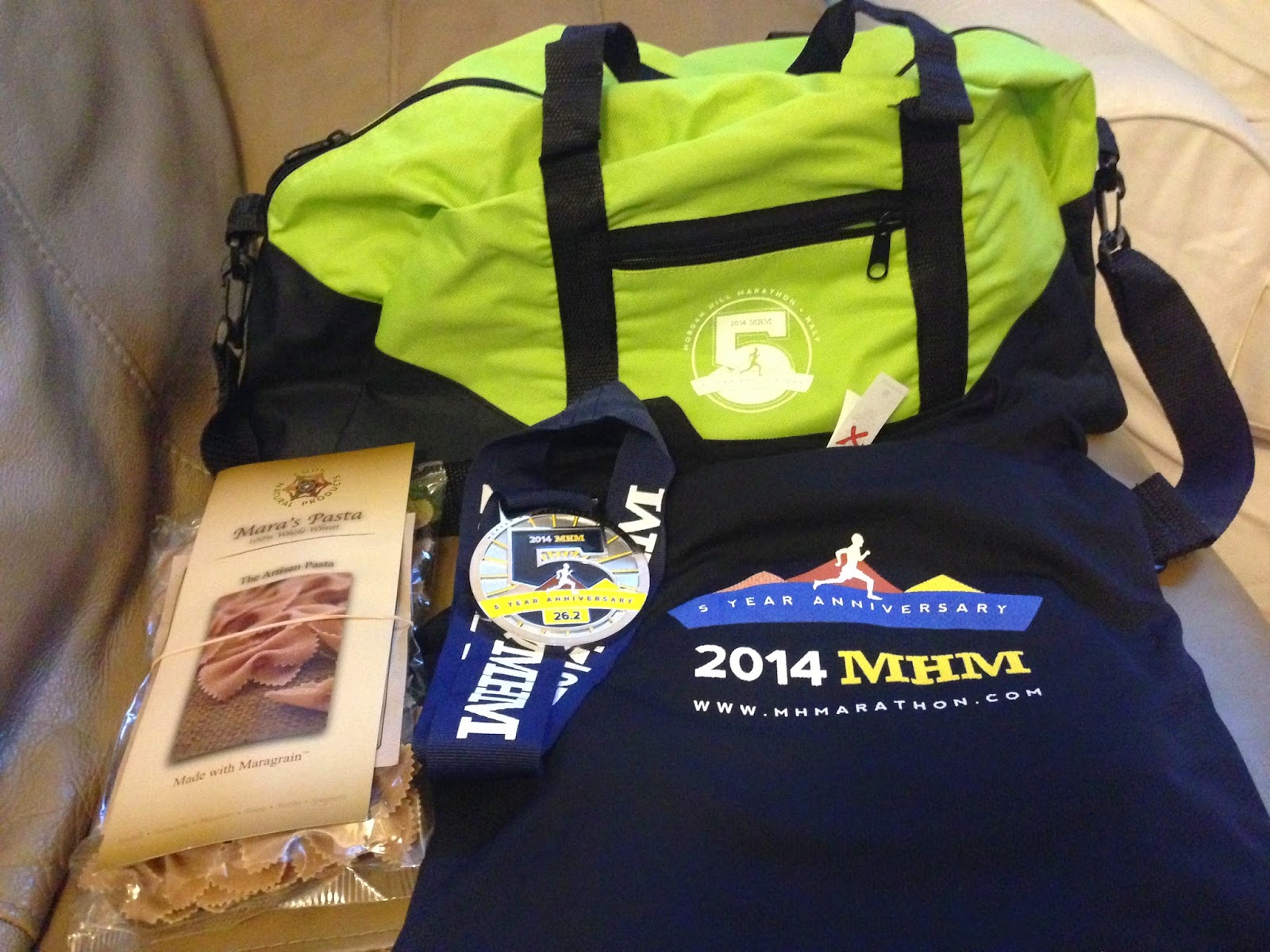 Saw several familar faces from RunningAddicts who paced this year including Sunny who paced the 3:55 and Randy the 3:35.  Below I ran into a fellow FOMO runner whom I have never met but ran into on the course then at finish line. Like me Sandy went out fast on the hilly first half (see did the first half in 1:45) then slowed down in second but coasted in for a comfortable 4:17.  Sandy was all smiles and was already planning her comeback race. 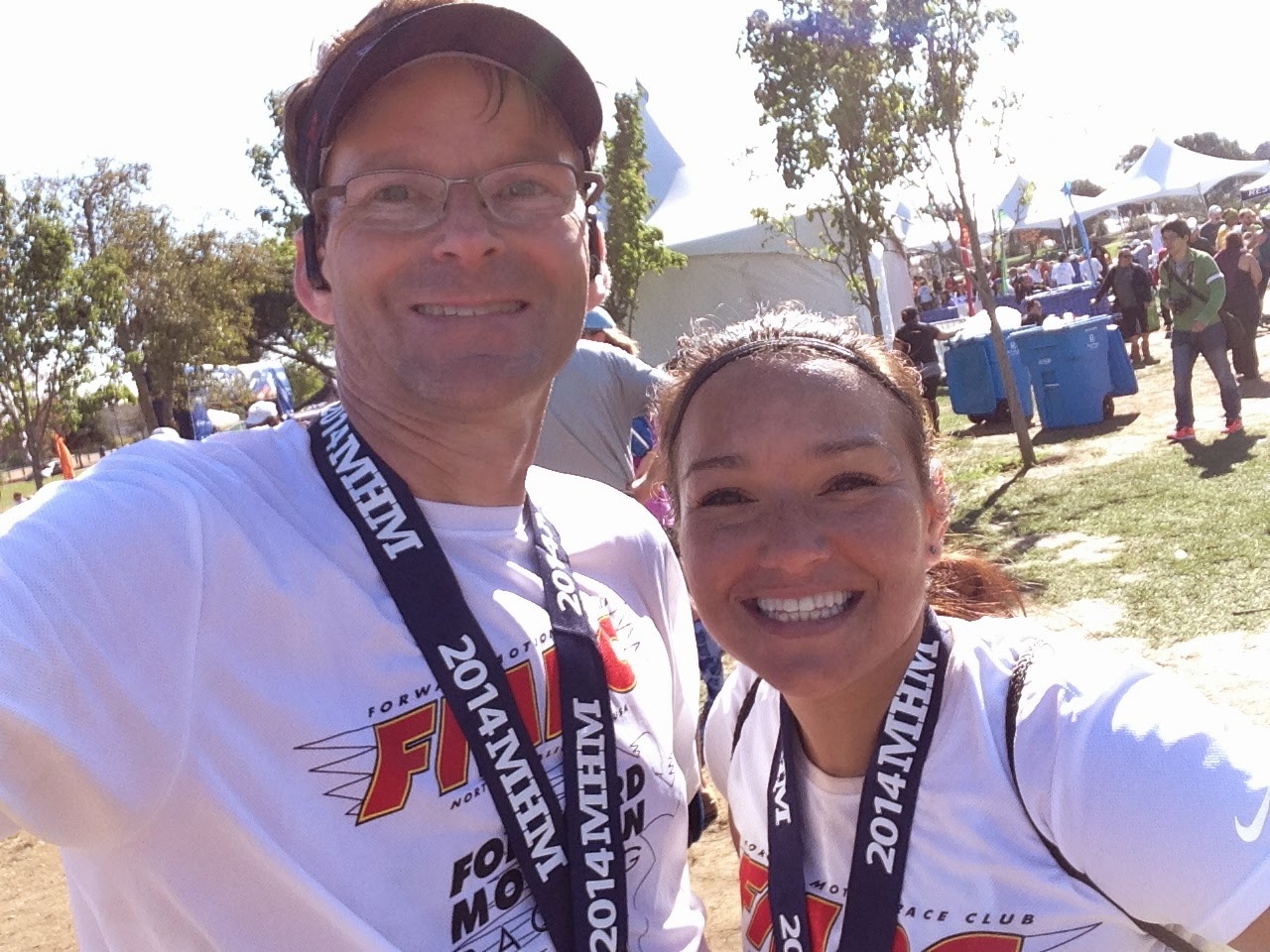 I completed first half in a fun 1:58 but lost my pace near mile 16.  My friend and fellow runner that day, Steve, ran the first half in 2:02 then second in 2:06 - remarkably consistent.

I started with the 3:55 pace group with the intention of running a near 4 hour marathon and PR at the same time.  I ended up coming in with the 4:25 group for the last 100 feet.  The 4:25 pace group leader turned out to be Satpal whom I met at the Dick Collins Firetrails 50, 26 mile turn around few weeks earlier.  It was a very pleasant surprise to see Satpal and if it wasn't for his smiling face and pleasant demeanor I may have let my poor performance impact an otherwise great race day. 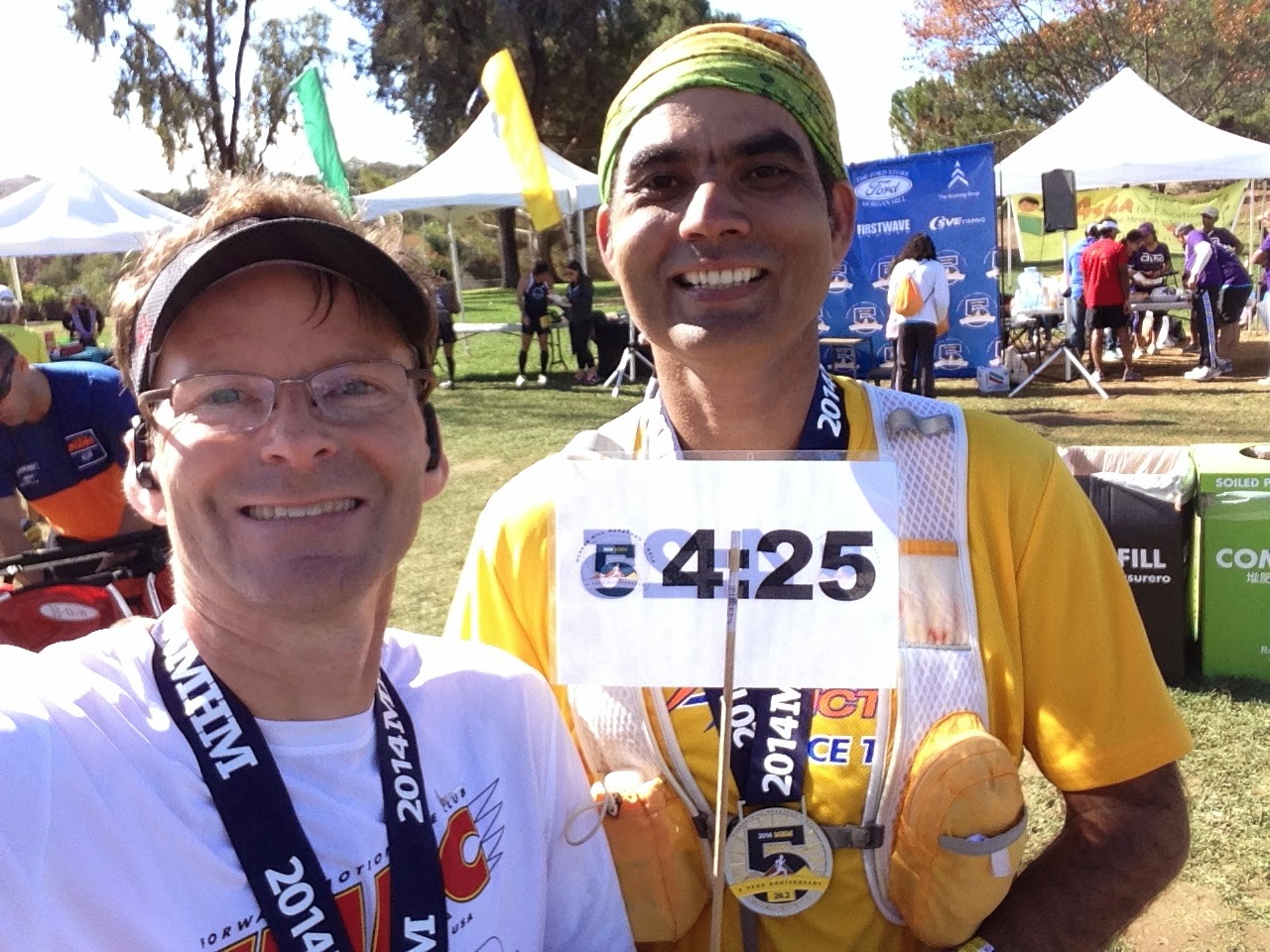 I would definitely run MHM again, in fact like Sandy I'm already planning my comeback race in 2015 to chase a sub-four marathon down!