Be forewarned that this race report will be rambling account of what turned out to be not merely a training run for my first 50 miler but the biggest trail challenge I've ever faced and the first I should have DNF'ed. [DNF = Did Not Finish]

Day Before Race Day I left work early around 3PM for an uneventful two and half hour drive from Pleasanton to Auburn and managed to get to the running store to pick up my bib with 15 minutes to spare. There were a couple of people manning a single table in the back handing our bibs, talking about the pasta feed at Auburn Ale House and chatting about the race. The Auburn Running Company is nice store with all the trail porn you'd expect for running store with moto, "The Endurance Capital's running source". The store even had the latest trail shoes by Atria which you rarely get to see at other running stores. However, I wasn't there for the pasta feed but to meet up with my mentor and his family at a nice restaurant named Joe Caribe known for pulled pork tacos, enchilada and beer. We chatted about the rather hot weather, the fact that one side of the highway coming in was on fire (not a good omen) and what the weather might be in the canyon the next day.

Dave had let his beard grow out to build up trail runner mojo and we were all absorbing toddler energy from his 22 month old before we decided to break for early bed. 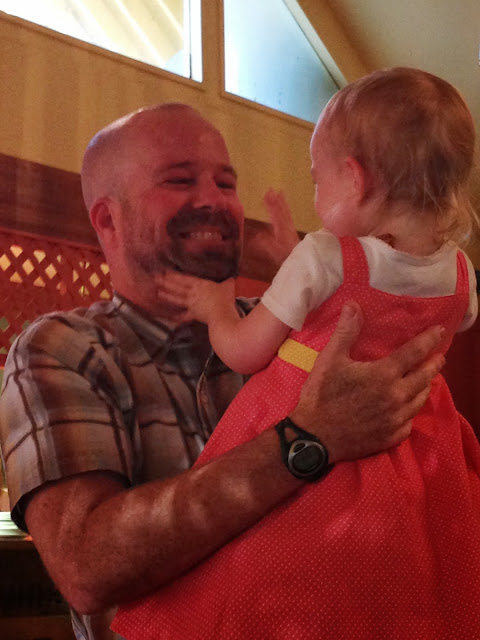 Morning of Saturday September started with 5AM wake-up call, since I knew it would be pretty easy to drive the ~3 miles to the bus pickup at 6:45AM so had lots of time to enjoy morning coffee, Powerbar and even made it to free breakfast at 5:40AM.  GPS directions didn't include correct address and had to circle a bit to find parking lot that looked it contained a bunch of excited trail runners.  There were restrooms at the bus pickup which was also the finish line which was very convenient.  One volunteer was handing out finish bags in case anyone wanted something like sweats (kid you not) at the finish and didn't want to wait for the drop bags to be delivered later in the day.  The morning was a cool 66 so the thought of sweats wasn't inconceivable yet.  This was also the 50mile/50k bus.  The 100k'ers had already left 2 hours ago.

Had a nice chat with fellow 50k/50milers on the bus and enjoyed the cool air and scenery on the way to the now familiar town of ForestHill.  Here is a picture of one of those badass trail runners, Angela, also part of the Forward Motion Race Team (FoMo for short). 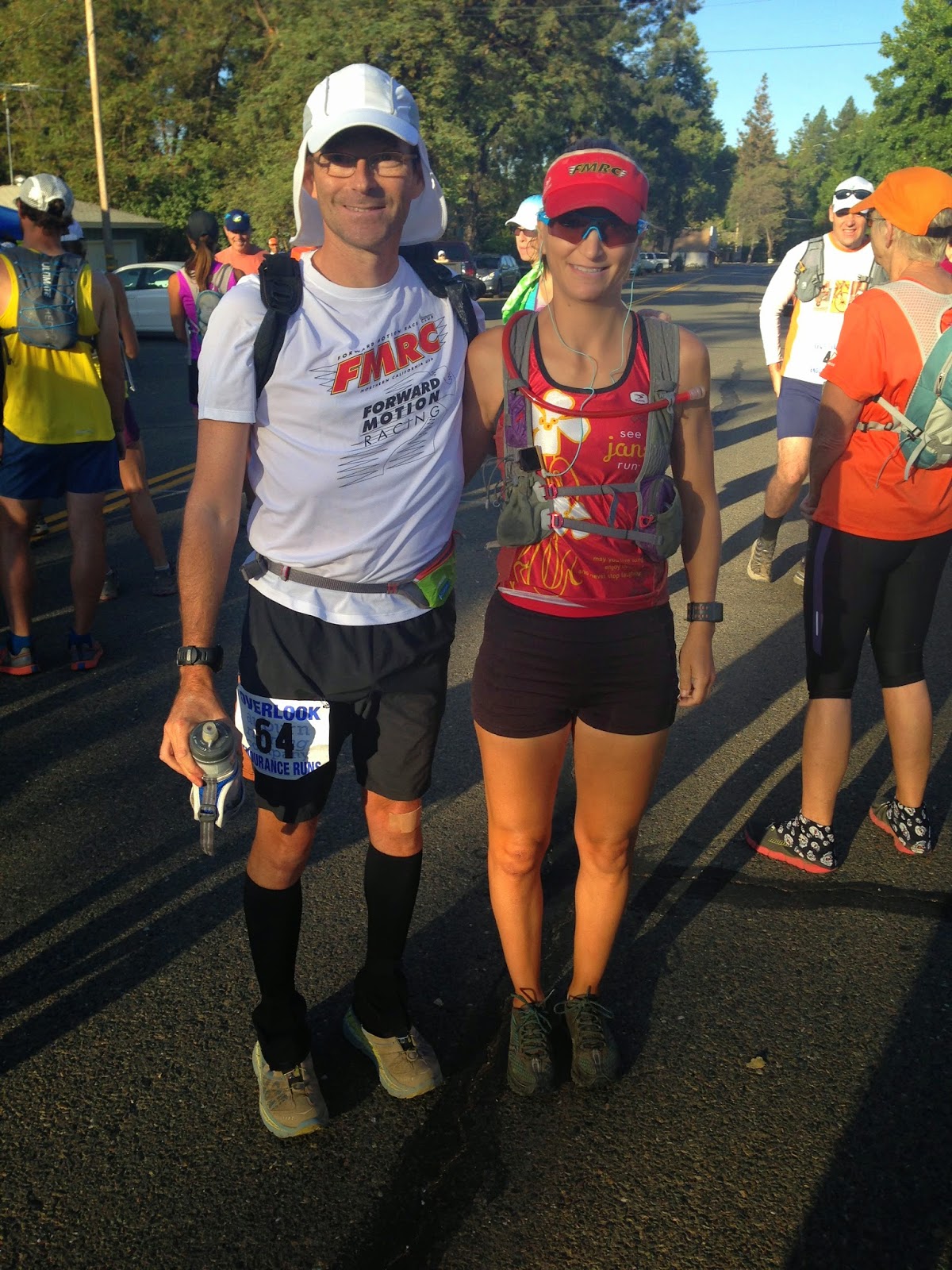 The start line was right in front of the Stone's Brew coffee shop 'downtown'.  Where you dropped your drop bags in the correct pile destined for the correct AidStation (AS), did last minute changes and lined up at the starting line.


Now, this is a trail race so the starting line was duct tape across the parking lot and the race director (RD) took a few minutes to give advice on staying on course (follow the yellow tape!!) and welcomed everyone to the first ever Overlook 50K then counted down to 8AM and said 'GO!'.

The first 16 miles were familiar to me because Dave and I had already run it as part of the WS100 Saturday training, memorial weekend.  You can read about that day and view pictures here.

Some notes though.  I was feeling so good and confident coming down the mountain that I forgot to pay attention to the markers and between mile 11 and 12 took a wrong turn and wasted about 10 minutes and had to climb back up to get back on the main course.  The fork I missed split between going left down to the river (which was really nice stretch of beach I really didn't want to leave) and a trail going up.  I knew I was in trouble when after getting to the beach heard no one, saw no one for 5 minutes then realized I had to run all the way back up the hill to figure out where I went wrong.  Arrgh!  Nothing worse than giving up your 'lead' and tiring your self out at the same time!  Old lesson reenforced. 'Keep your mind focused on the trail and watch for markers'.

Soon after finding the correct trail, I climbed a small hill and found the sign I had sat down by during the training day.  I was proud (at the time) that I wasn't light headed and felt great. 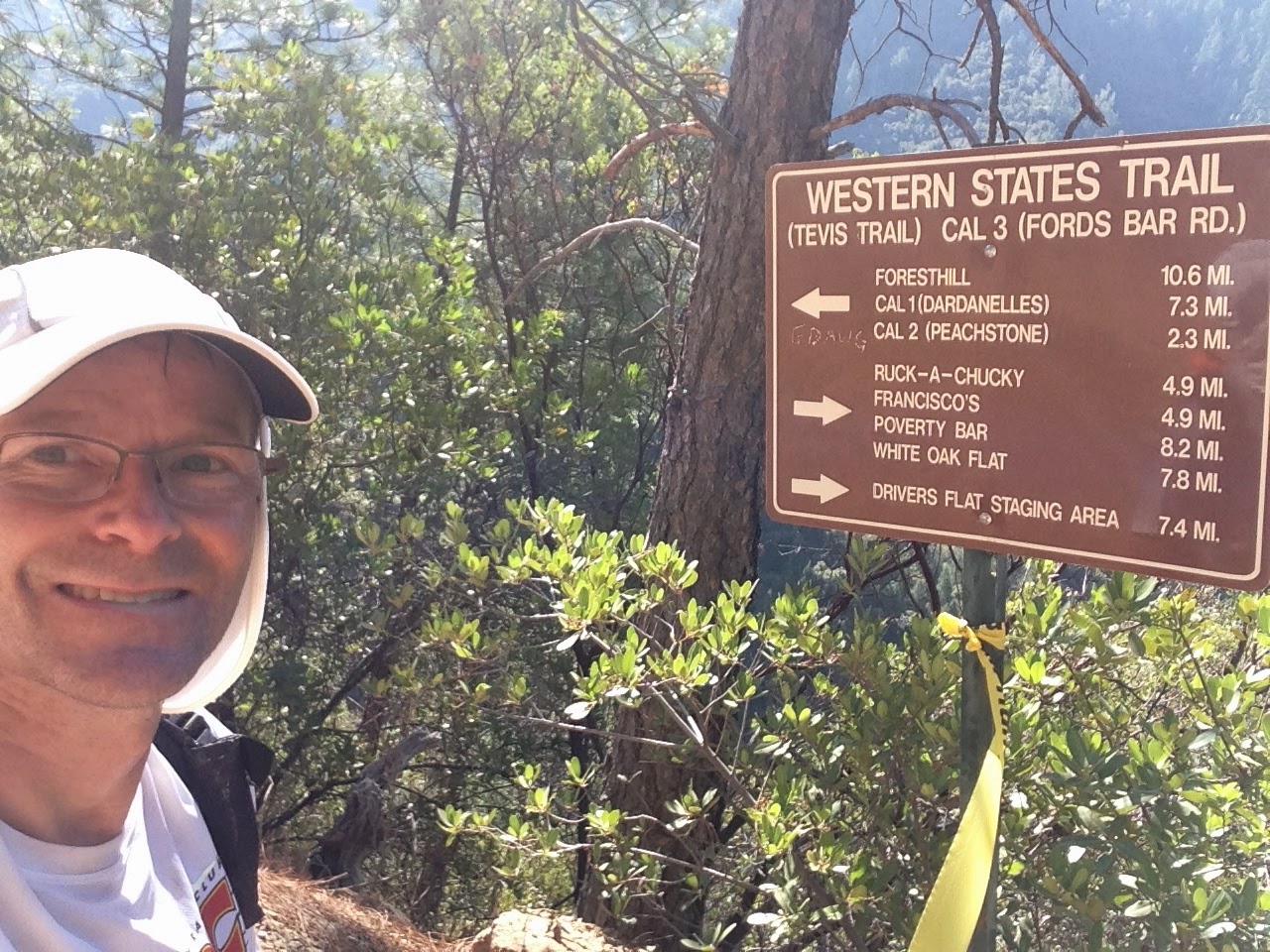 From Rucky Chuck AS (5 miles past the sign) till Poverty Bar (3 miles) it had started to heat up and by the time I reached the river crossing (8.2 miles) I was dizzy.  I was drinking 23 oz by every aid station, taking salt gels, yet my head was telling me I was too hot or electrolytes were off.

By the time I actually reached the river I knew something was wrong.  I was just not feeling well, was tired, dizzy and just wanted to sit along the river forever.  I actually did a full body submersion in the water fully clothed and all then sat waist deep for at least 5 min.  Volunteers helped make sure we got across the river since some runners had their calves lockup but I felt immediately better after the cold water dip.  To my surprise, 100k #1 and #2 spent past me at the river. Nothing like having two 100K runners and a fresh cold water dip to invigorate and motivate you to go. 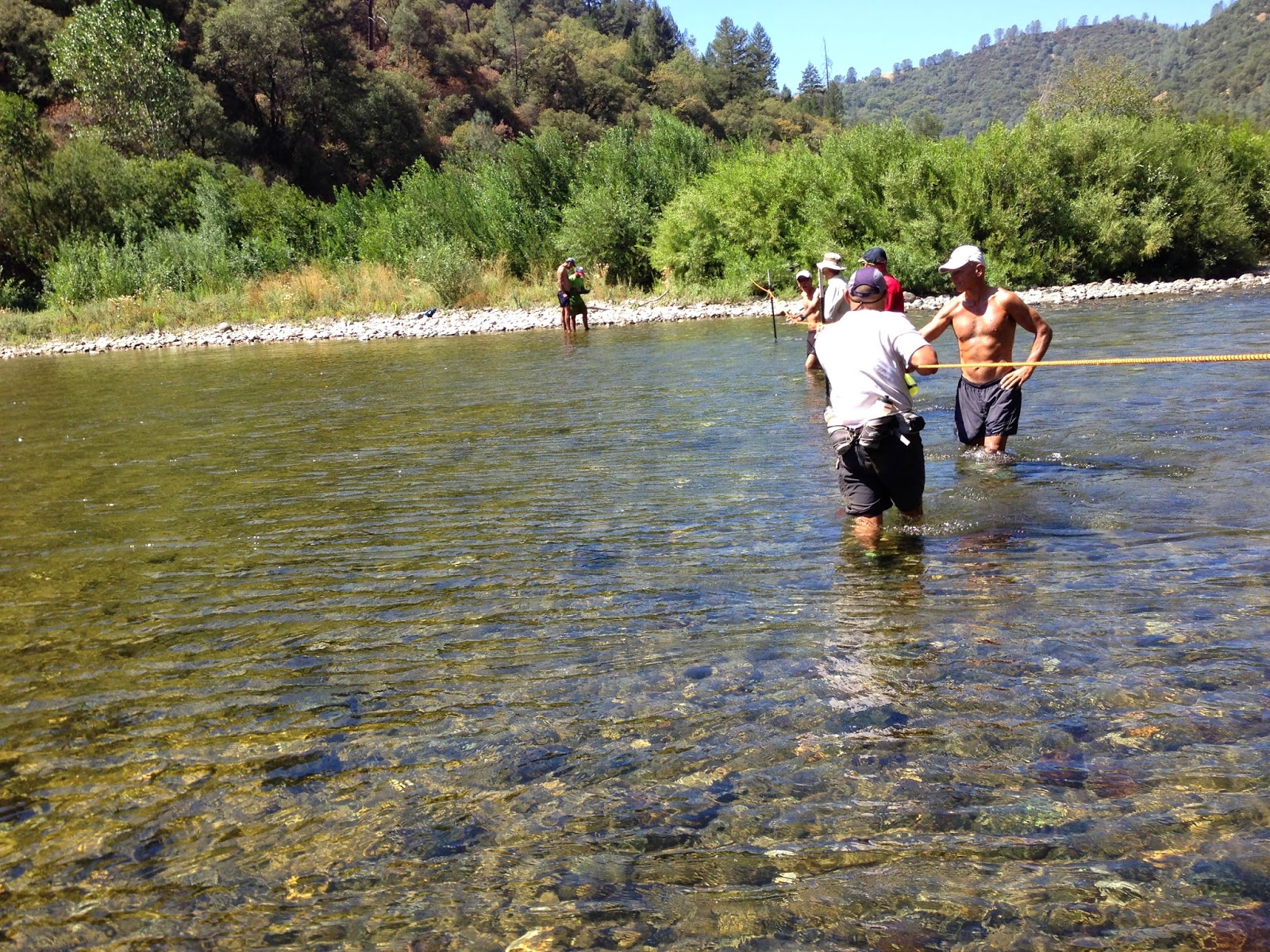 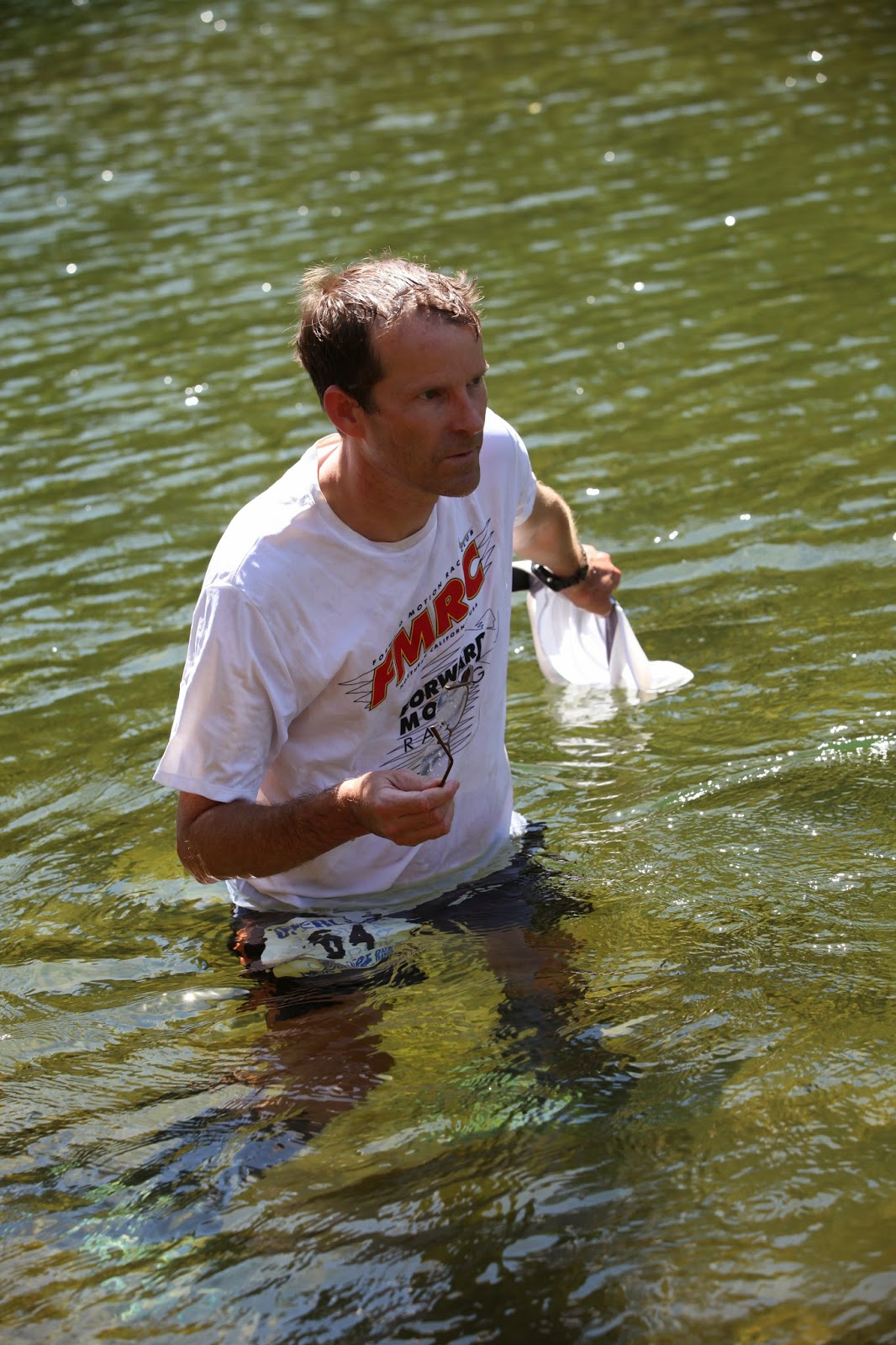 They ran out of ice at the aid stations!  Crap!  The volunteers said they radioed in for more ice and were waiting for it to arrive.  I asked very nicely for a bit of whatever they had and received half cup. Better than nothing!  This is where I should have dropped out because I was getting dizzy again, fatigued and still had 11 more miles to go and mentally I knew I had to climb back out and up to overlook.  And, it was getting hotter and hotter. 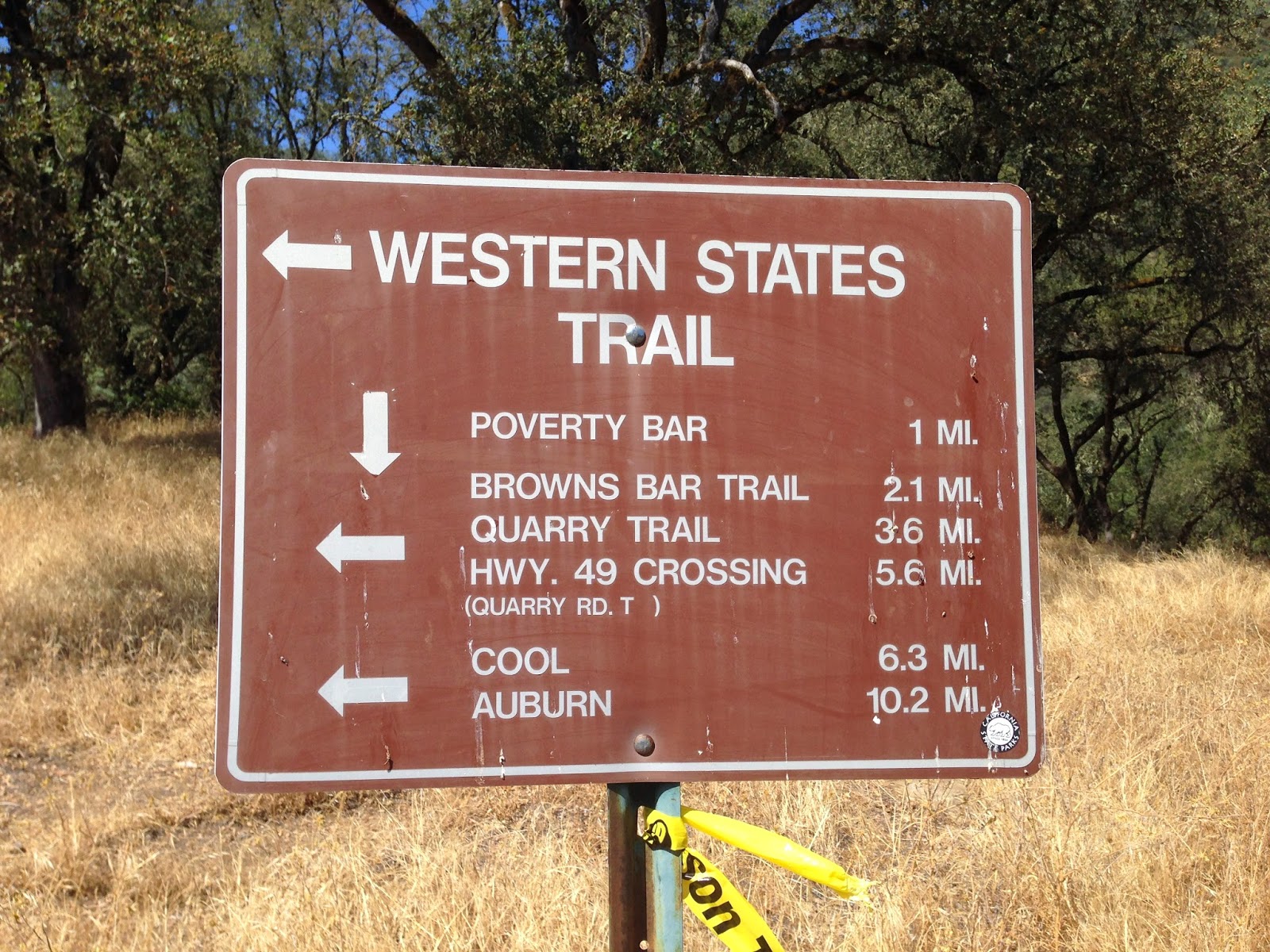 In between Browns Bar and the Highway 49 crossing, you down off the moutain and onto a fireroad.  As soon as you hit the fireroad you'll see parts of an old railway bridge and a cave on the left side of the fireroad.  The cave gate is named 'Mountain Quarries Mine Gate A' but is also known as Hawver Cave after the turn of the century dentist who found and named several prehistoric fossils from the cave.  What a runner in 98 deg heat would be interested in, however, was the arctic subterranean air billowing from the cave. I stood in front of the cave a good 5 minutes just enjoying the cold air like in front of a refrigerator. 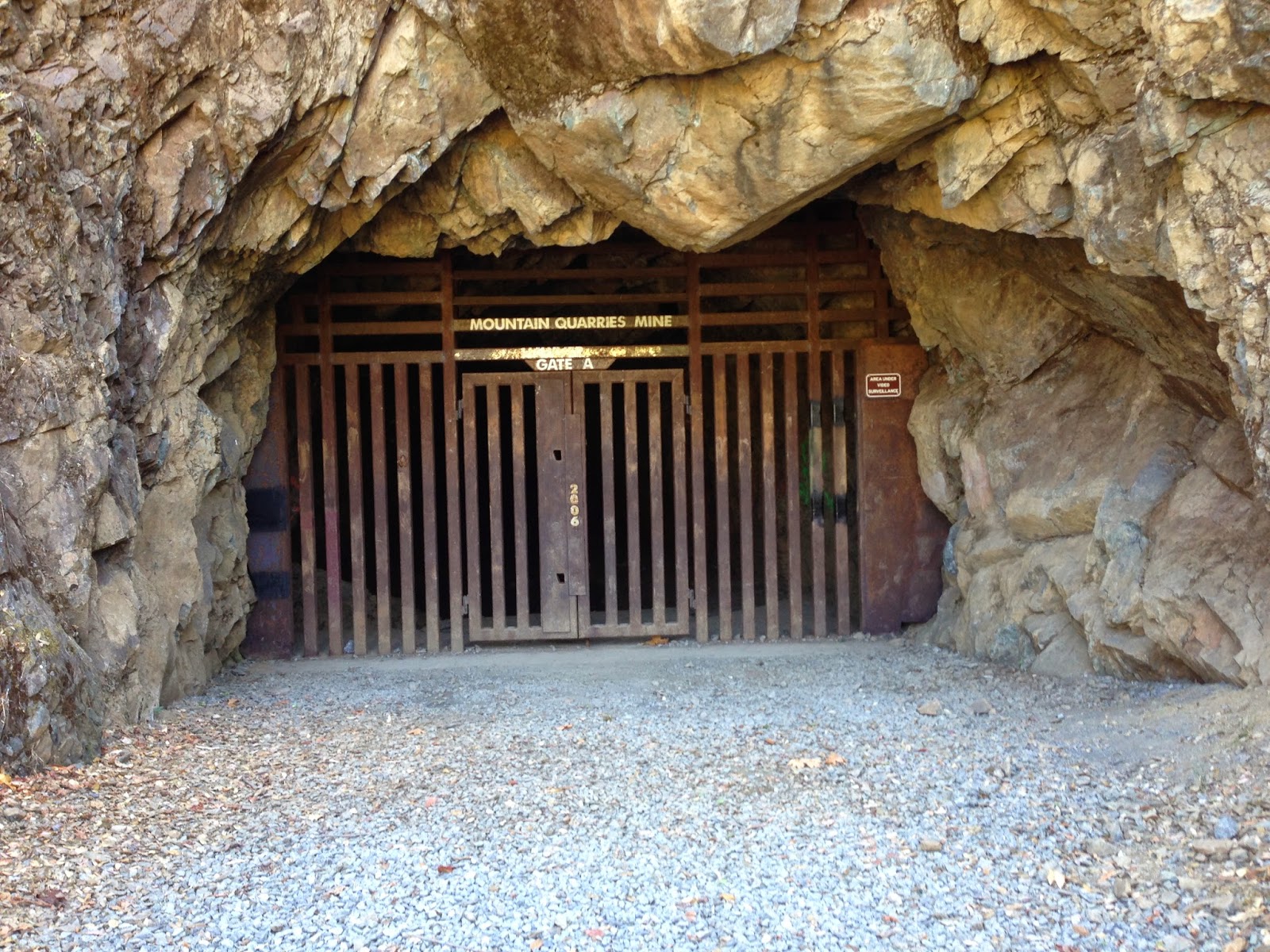 I stopped several times during this short 4 mile section to No Hands Bridge.  One very nice volunteer let me sit in a chair for a minute at the freeway crossing before another told me exactly how to get to the next AS.  All I saw was a climb up the freaking side of a mountain and a suspension bridge miles away.  Turns out the 50K only has to go up a couple of switch backs, then down a slope to the bridge. I was starting to become pessimist which wasn't a good sign.  However, I got a few shouts of good luck and 'Go Forward Motion!' which helped alot. I believe the person who helped me at the crossing was 'John' from Forward Motion who had finished the Western States 100 race and was there to volunteer and run with his girlfriend who wanted a partial WS100 experience.  I think she got what she was looking for plus more.

Eventually I made it to No Hands Bridge but was one of the longest 4 miles of the journey thus far.  They had plenty of ice and runners where rolling in it. OK that is an exaggeration but we filled up our hand-helds, packs, had it on our necks and wrists in an attempt to cool ourselves.  AS volunteers were awesome, chatted with us then motivated us to finish the last four.  One young woman was wearing a San Francisco Marathon '2008?' finishers shirt so we chatted about that race for awhile.

OMG.  The last four miles.  What can I say. I really should have just DNF'ed at No Hands as I had nothing left and was just shuffling along.  I chatted with Todd a gentleman who had been having calf issues the whole day and was also walking alot.  Walking in 98 deg heat up a mountain from river level to the overlook is just not fun.  You know your finish time is just going to suck, its slow progress and painful.  I stopped multiple times. Starting dry heaving and was just not in a happy place.  But, I kept going for some unknown reason.  No, I wanted to finish what I started and was stubbornly pushing onward.  Sometimes being stubborn is not a good thing.  It took me more than two (2) hours to walk/crawl the last four miles.  Shit. That was bad.  Here is the final picture by the amazing Joe McCladdle some 200 ft to the finish.  The smile just meant that there finally was an end to this 'race'. 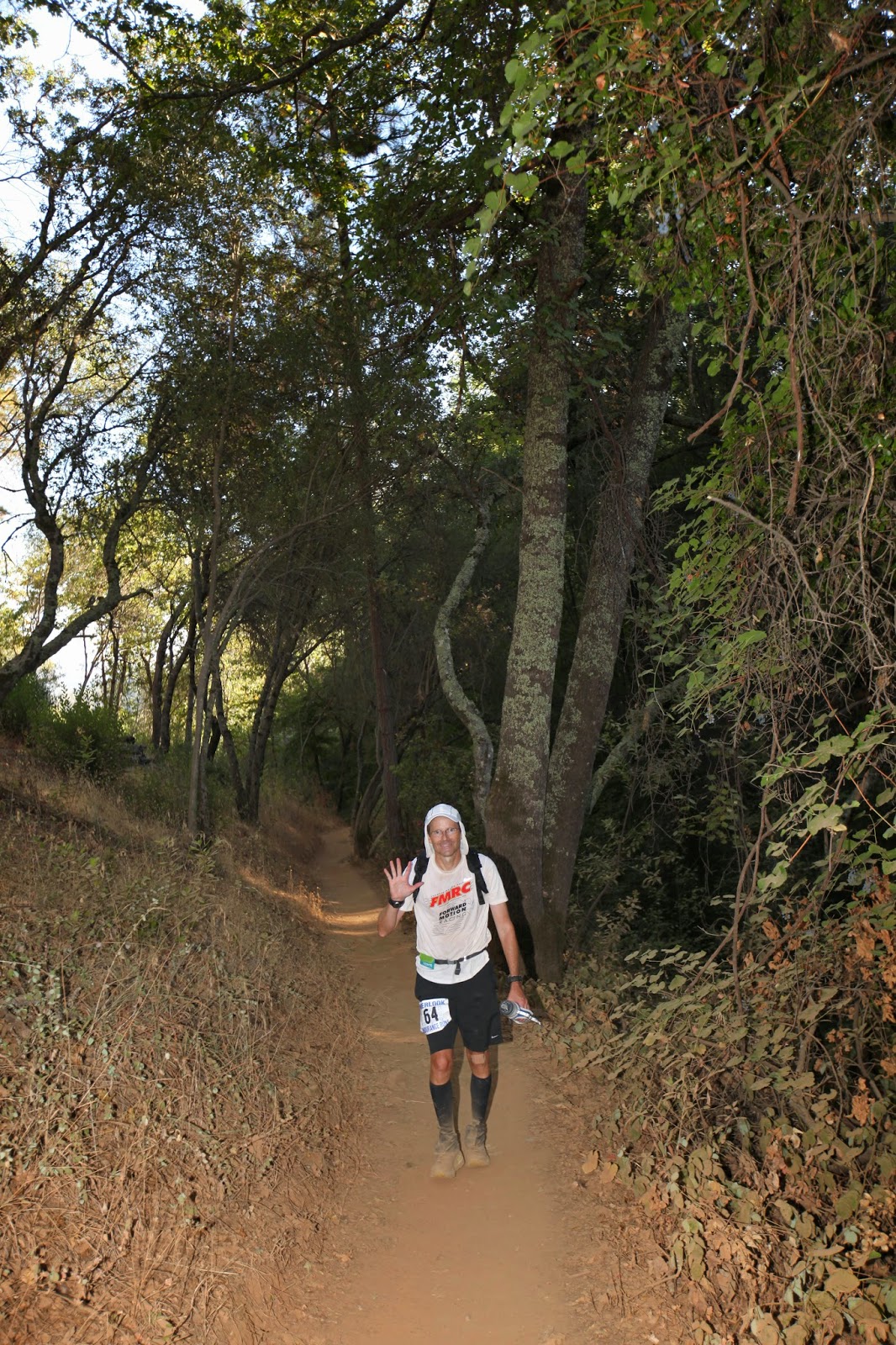 You know how you hear about runners crying after crossing the finish or just plain collapsing?  I wanted to do both but could only manage half a heal kick then fell to a cool grassy area not far from the finish then lost most of the fluids I tried to take in. 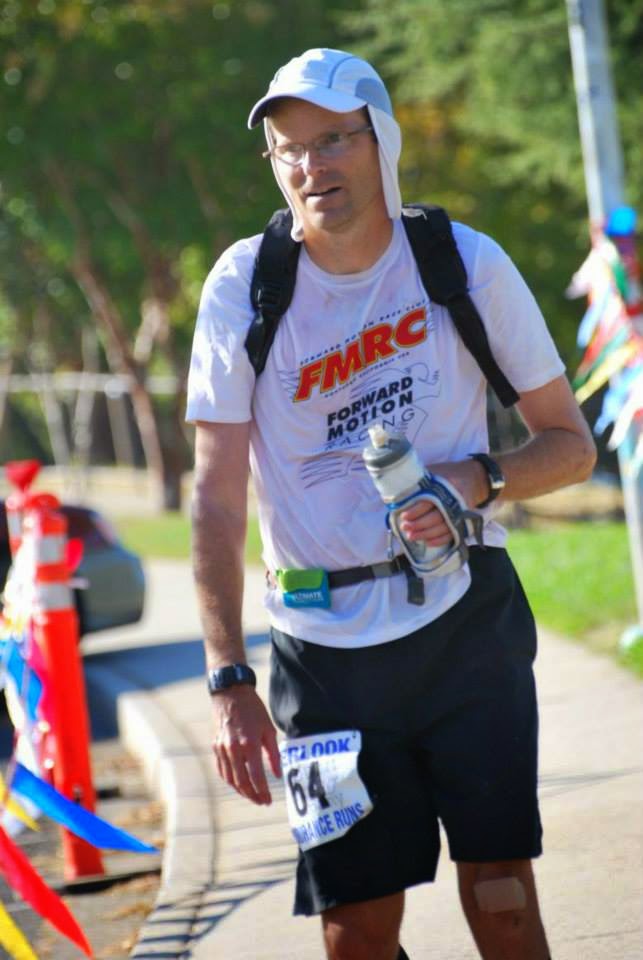 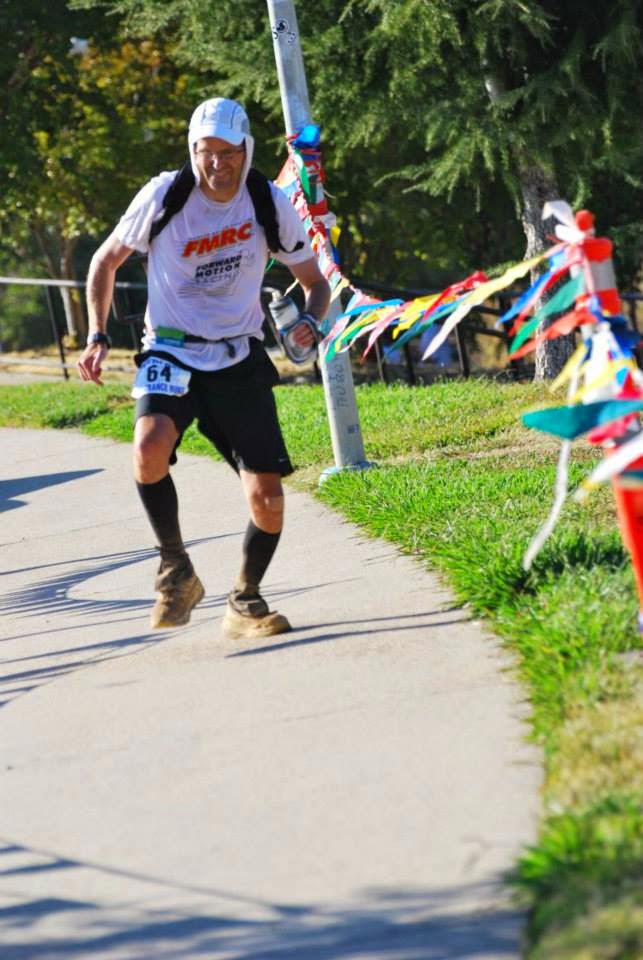 I wasn't around for the early finishers who where naturally tougher and weren't as impacted by the dust, heat and dehydration as us slower turtles.  However, I can tell you there were some strong commonality amongst us turtles.  In general, we were covered in dust, had gravely voices because of dust and dehydration, were laying in cool, shaded grass and were dry heaving as we tried to take down fluids.  The BBQ and beer sat unmolested by us and was mostly enjoyed by volunteers, pacers and really tough runners.  Myself, in particular, couldn't hold down water for 2 hours until a nurse/paramedic gave me some anti-nausea pills; then, it still took another hour before I could.  My friend Dave drove me to his mother 'n laws place where I sipped some super electrolytes and after another two hours finally felt normal enough for the two and a half hour drive home. 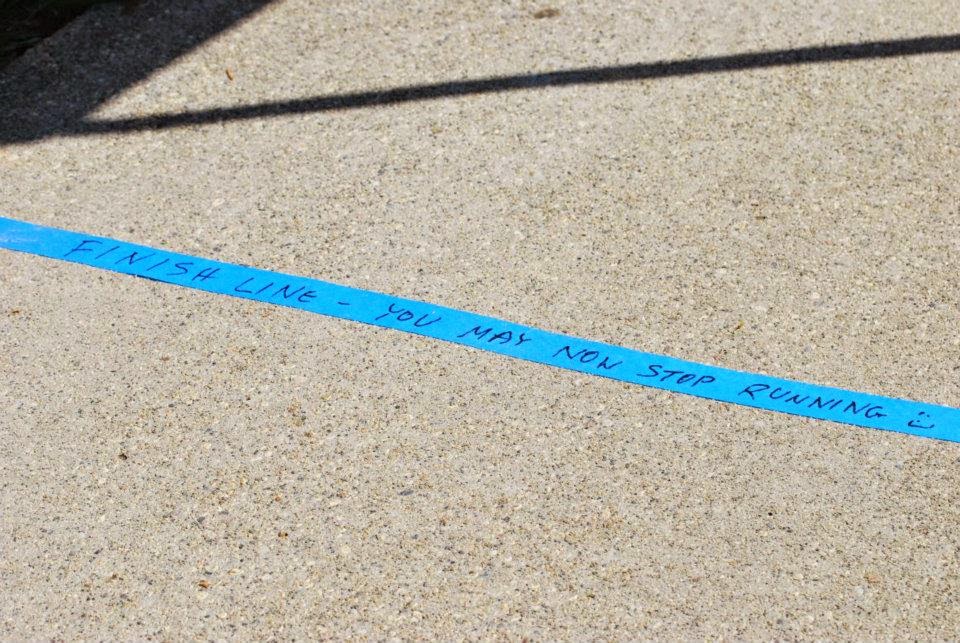 My finish time was 9:10 hours.  Yeah, 9:10 elapsed hours where 8 hours were recorded as moving.  So, that is a minimum of an hour at aid stations or sitting on a rock/log on the side of a trail.  Once I slowed down cuz of the heat around mile 16 or so I really should have just DNF'ed and not put my friends and myself through the stress of caring for a runner suffering from dehydration/exhaustion. Bad me.  My lesson learned was to acknowledge I have limits, listen and obey what your body is telling you and appreciate really good friends and volunteers who support my crazy-ass adventures I choose to undertake.

What do you do when you are 145.5 of 158 pounds the day after a race?  I pretty much worked from home, drank fluids like they're about to be outlawed (broth, grape juice, gator-aid) all day and ate light foods like oatmeal, etc.  I was 150 by days end and by second day back to race weight of 153.

I have not had caffeine nor alcohol since before race day and plan to have a really nice cold IPA this weekend as I reflect on the race and what it taught me.  I also withdrew from attempting my first 50 miler next month because I know my body is telling me I need time to heal.  However, I plan on pacing a good friend on his first 50 miler for the last 25 miles! 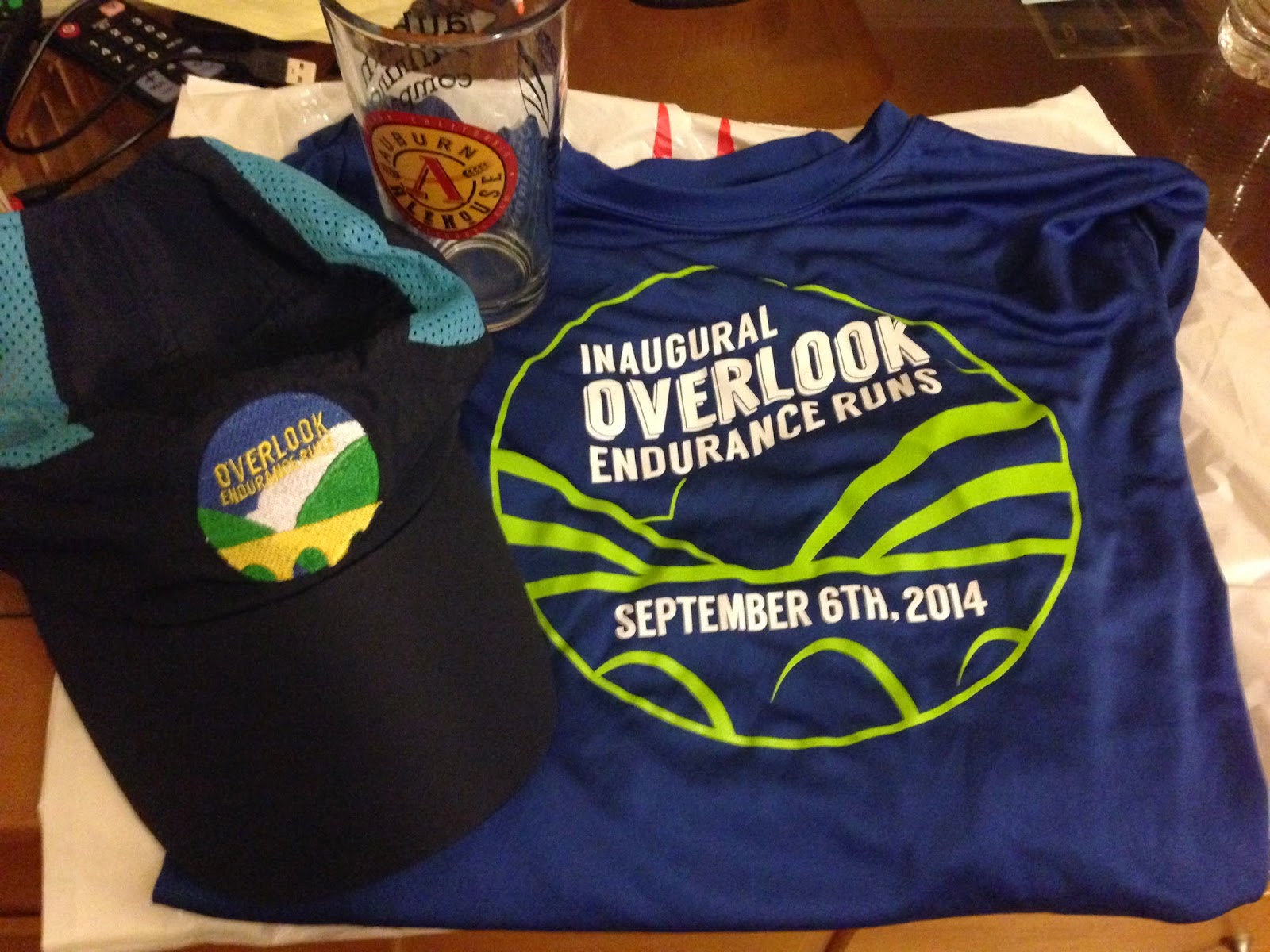