This race is a typical 'trail' race in that is is small (~300 runners), laid back, very supportive with a very well marked course, Aid Stations (AS) and finishers table.  This particular race also features grilled hamburgers, hot links and BEER!

Bling consists of a finishers bag with socks and shirt imprinted with the race name. No, there are no medals except AG or overall top finishers.  Who needs another finishers metal to toss into a box anyway? 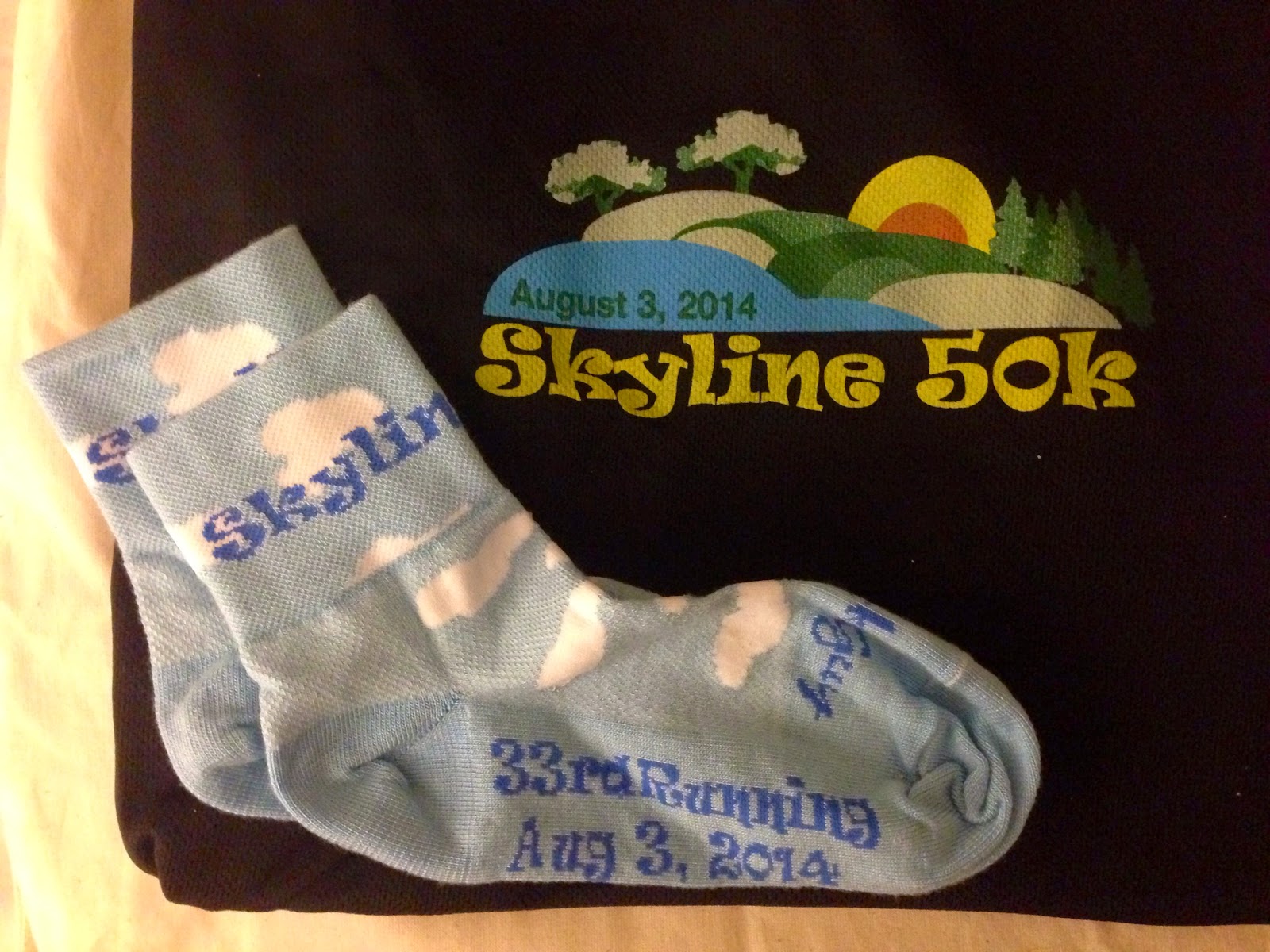 This race was recommended to me by my Forward Motion Race Club (FMRC) mentor, Dave Stark, as well as the FMRC Ultra Group lead, Todd Shipman, as a preview of what the Dick Collins 50 miler might be like.

The race starts at what should be the very familiar Lake Chabot marina and you go out from the left side heading for the dam.

Here is a pic of Dave and I not too long before the start: 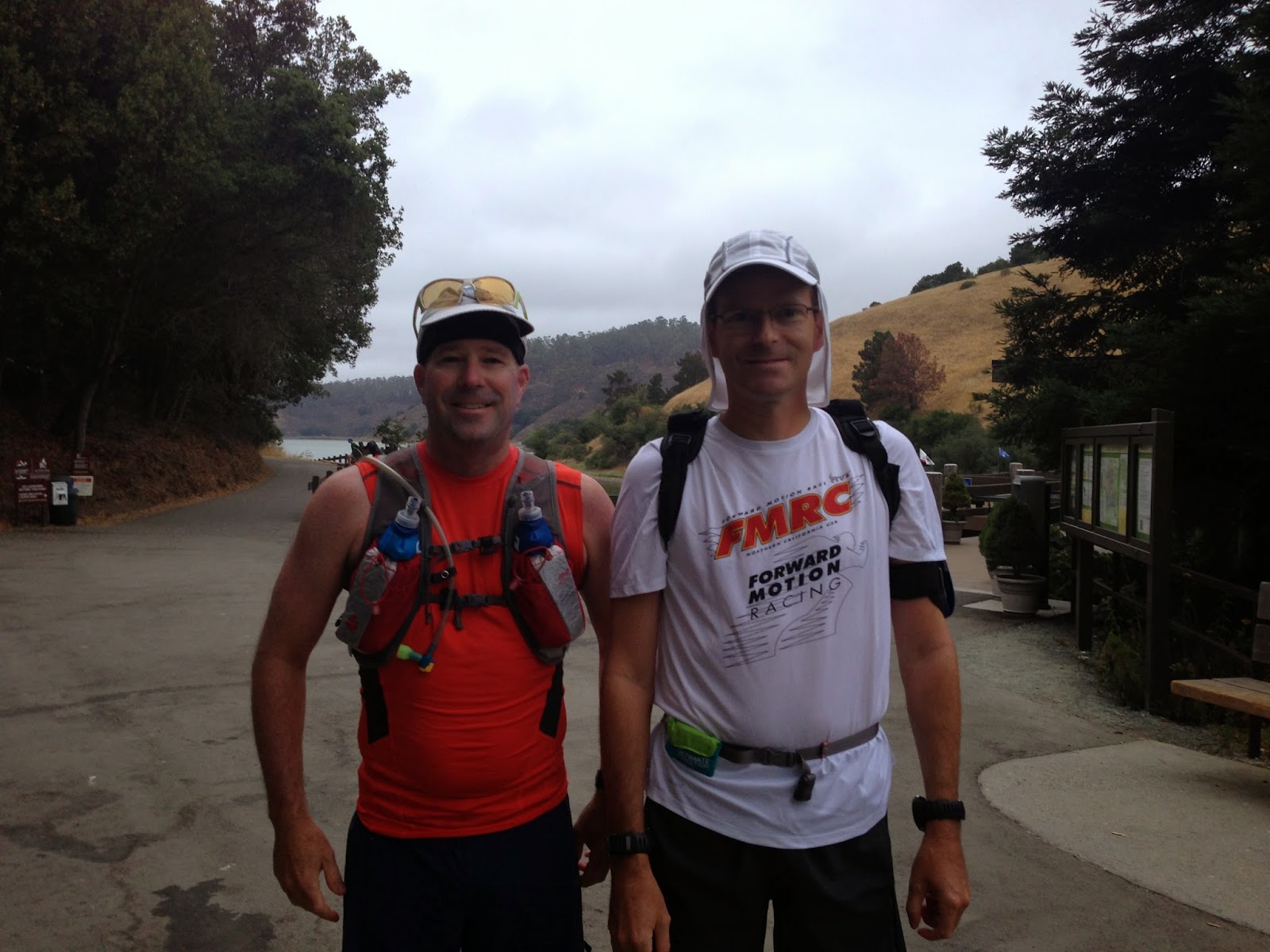 The weather this morning was a very refreshing 63 degrees with overcast clouds - perfect running conditions.  I got there an hour early and had plenty of time to get my bib and use the restroom.  At the start the RD made a short speech, indicated the course would be marked in PINK ribbons this day then said 'GO'. And that was it. We were off!

The course itself is a figure eight with many rolling hills.  The foggy mist stayed with us for the entire morning and looked like this: 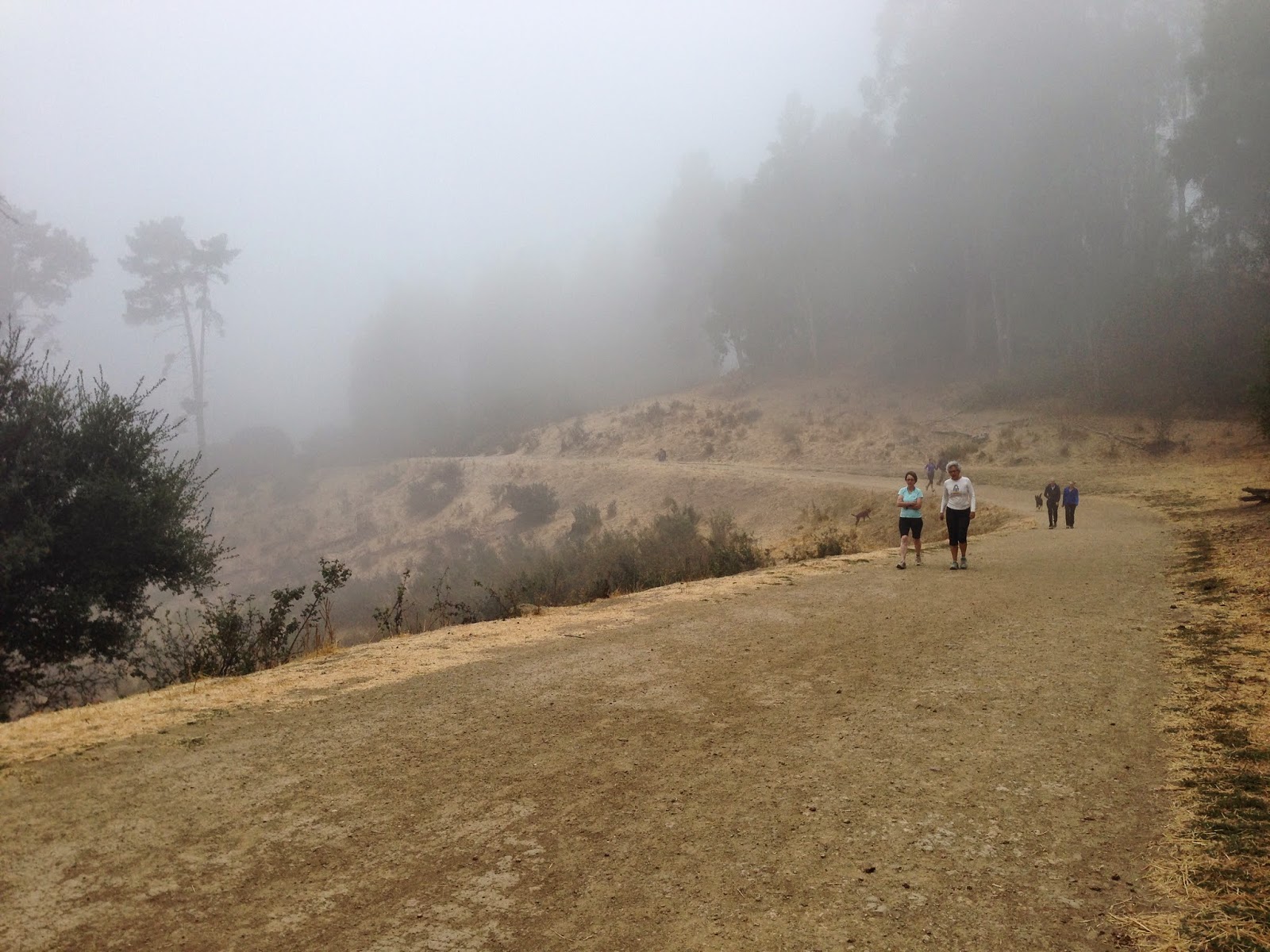 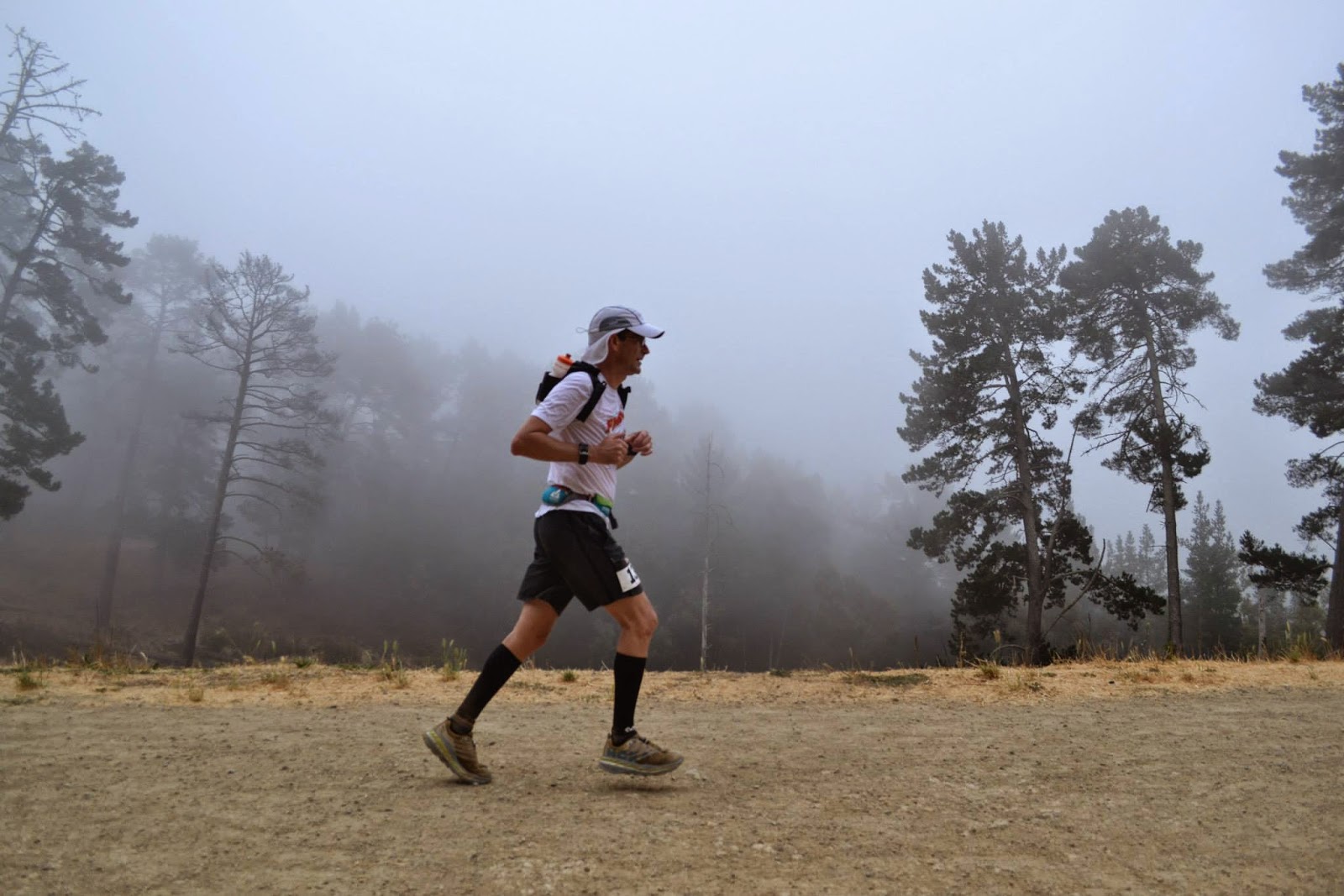 You run a mixture of fireroads like pictured above and wonderful canopy-covered single track.  It is impossible to get lost on this course because you have:
In addition to rolling hills are several steep hills were all but the most elite athlets power walk up.  The woman below also happens to be wearing a pink version of OrangeMud's HydroQuiver.  Was fun chatting with her for awhile. 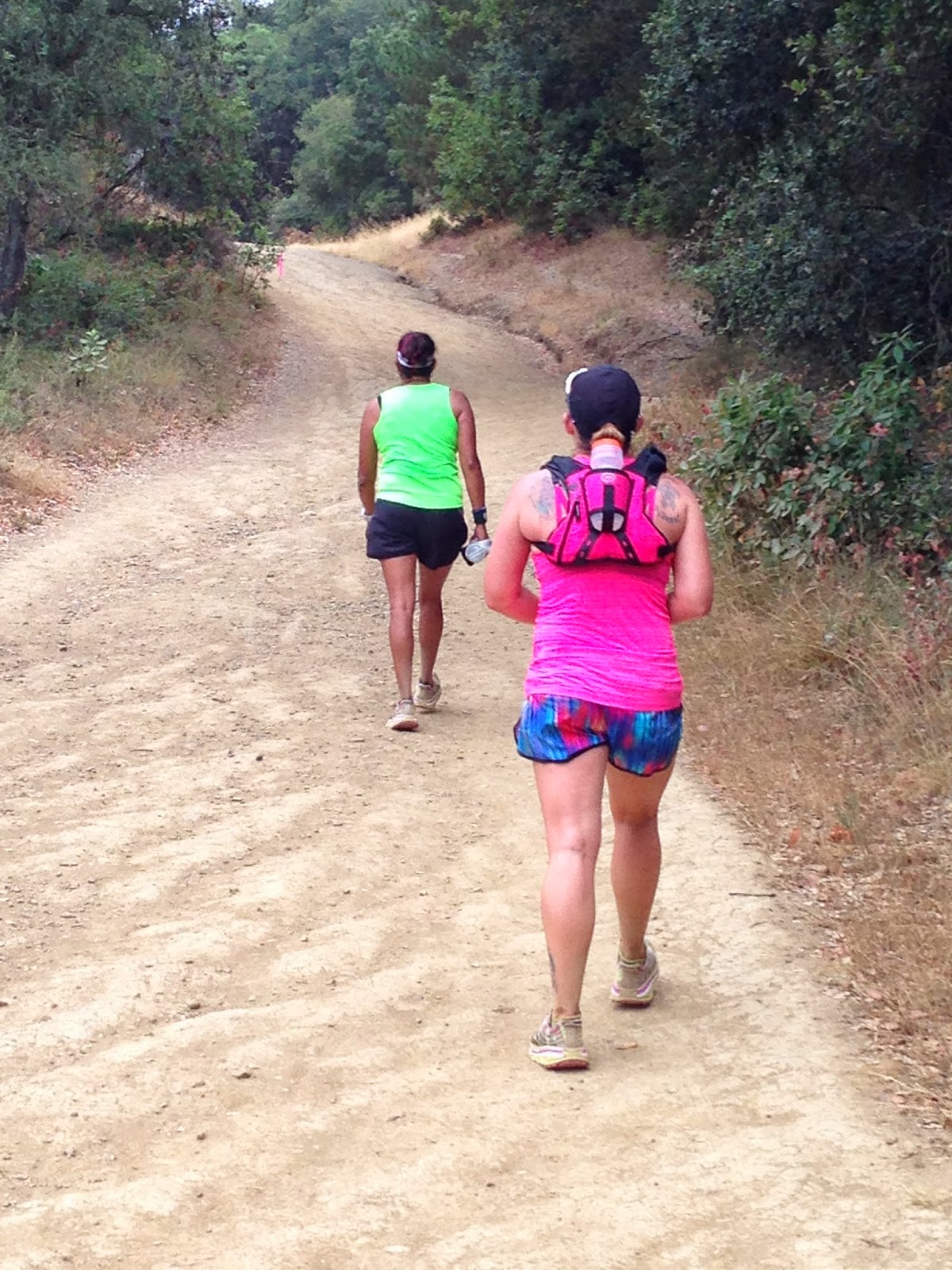 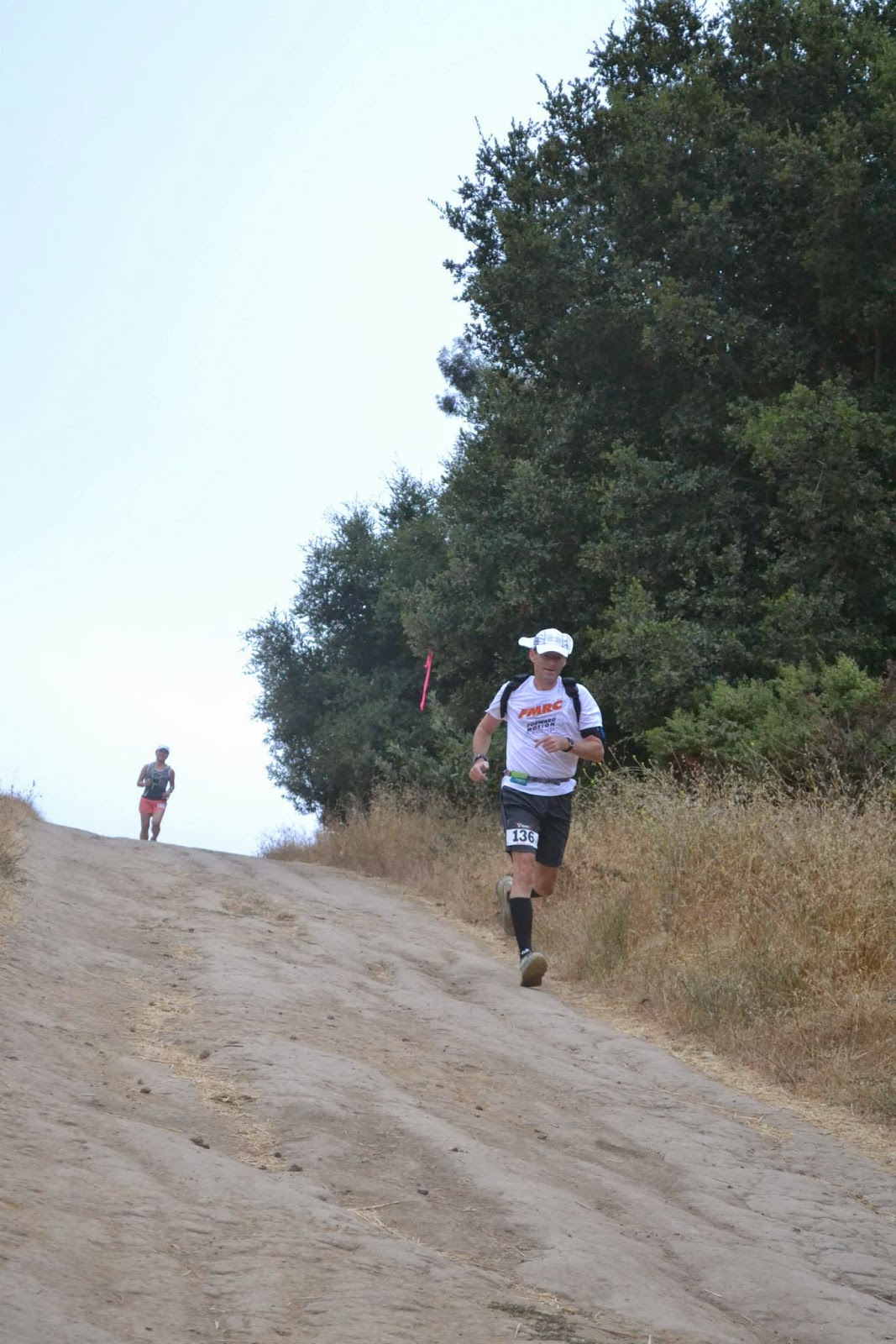 Eventually, the fireroads take you to the more technical and rugged Redwood Regional Park.  The trail twists and turns with exposed roots, rocks and steps until eventually becoming single-track. This area is frequented by The San Francisco Running Company trail runners. 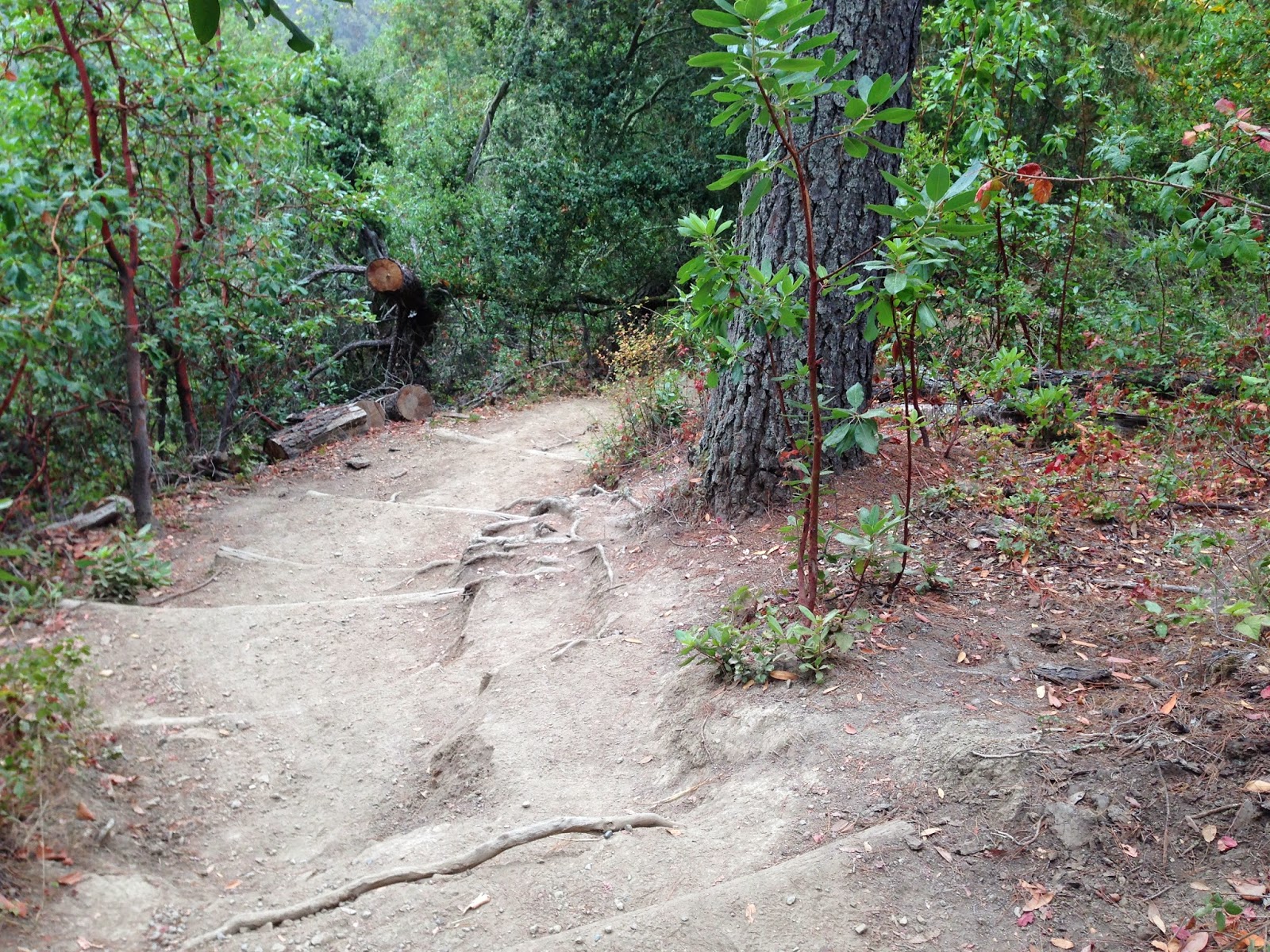 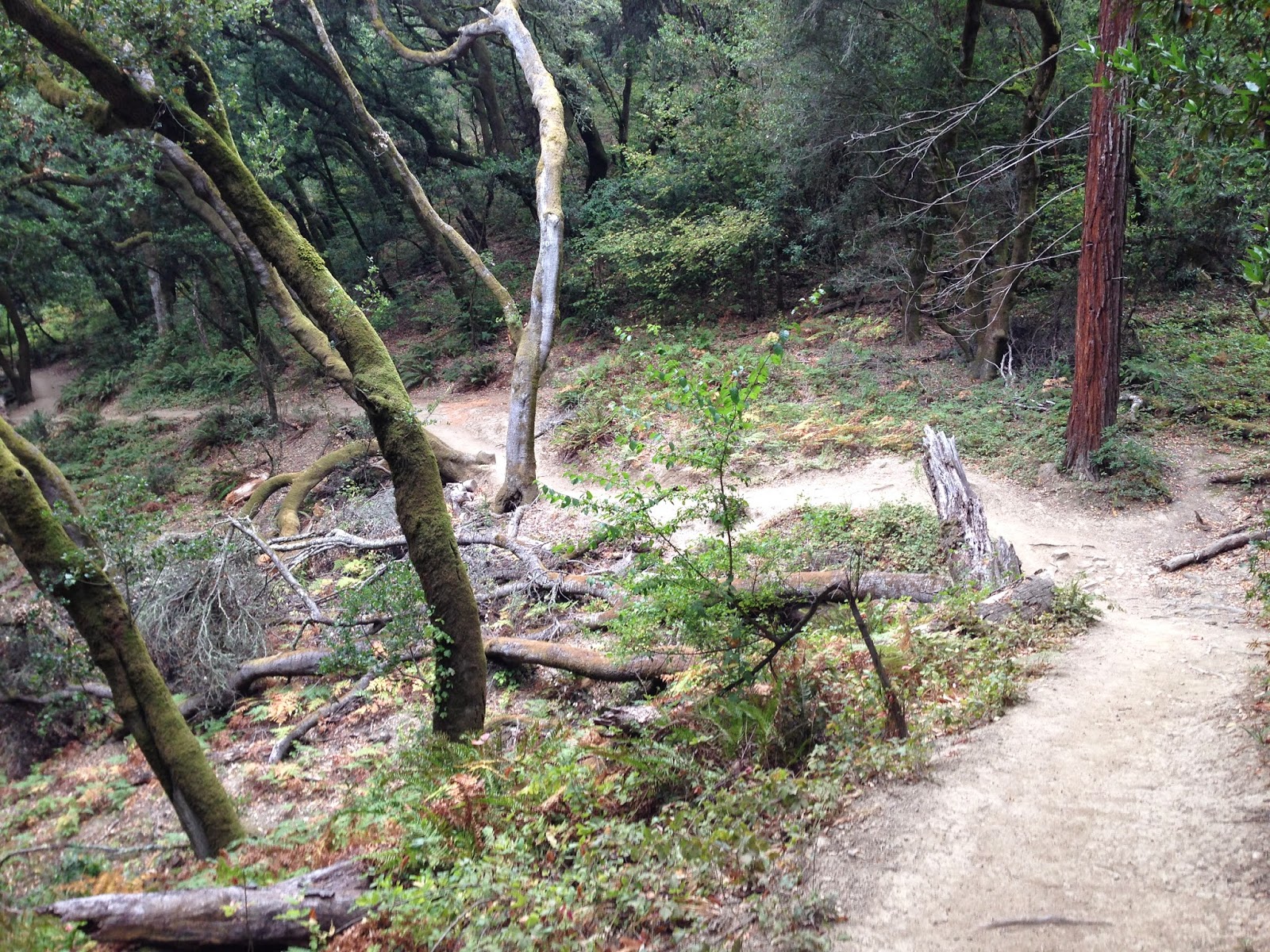 Here we start to see the skinny, tall redwoods but the trail is still wide.  I don't actually have pictures of the fun single-track trails because I was having too much fun zipping down them and trying not to face plant or slip of the trail down the sheer sides

On interesting note.  There was very little poison oak that I could see.  Which was great.  However, I was asked by a course marshal around mile 13 if I had been stung by a bee.  What, no I replied.  He said that I was the only one that had not and nearly every other run had.  Some runners had been stung 8 times.  I have never heard of this happening before and luckily didn't happen to me. One runner in front of me had one bee sting on his right leg.   I'm not really sure what one should do on a trail with a cloud of angry bees.  'Run' sounds like a good start but where? 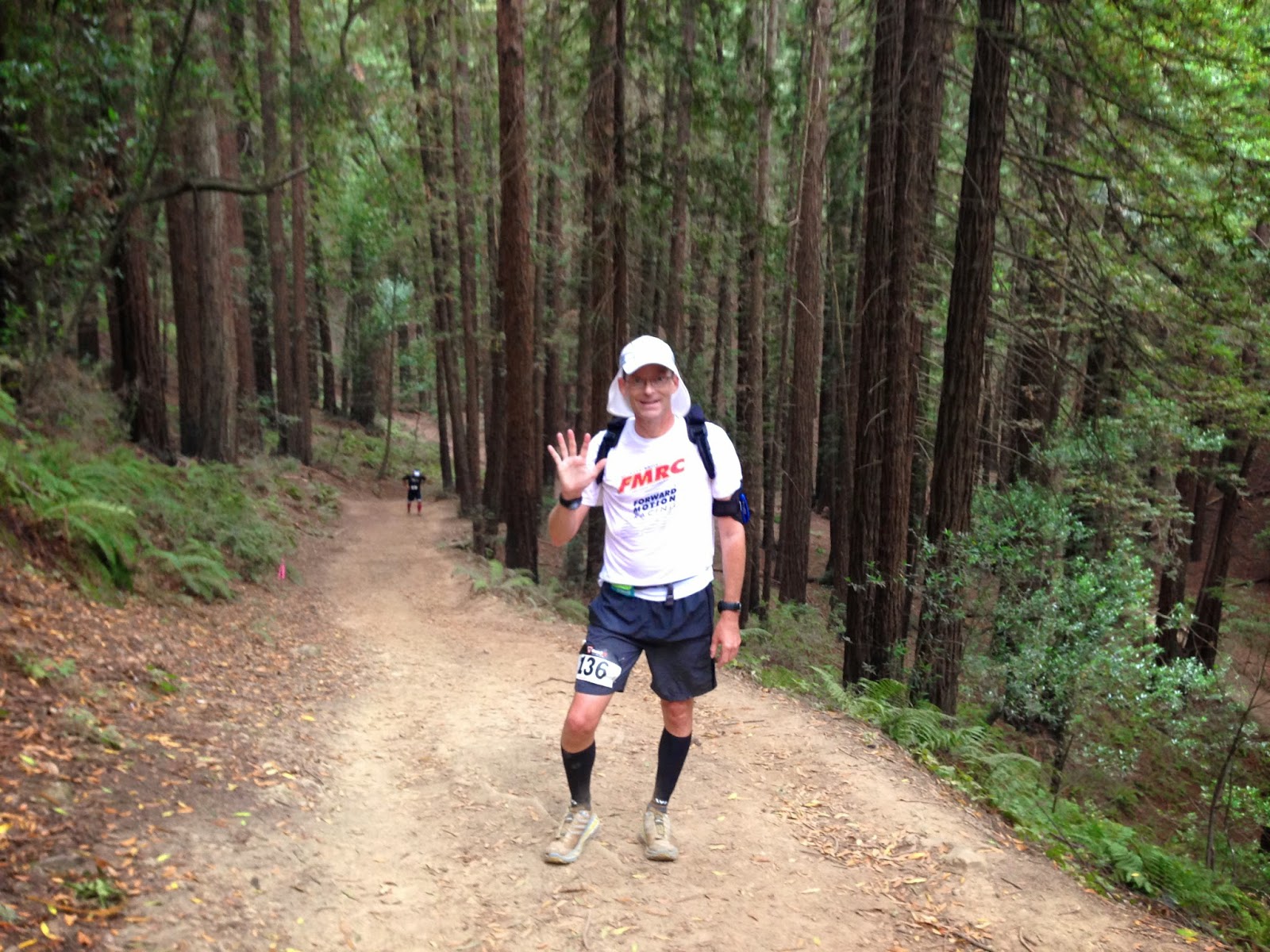 Dave finished in sub-6 hours and nearly PR'ed.  I took at least an hour longer to finish and was having a hard time with the final hill climb around mile 26.  We enjoyed the food, the keg of Anchor Steam beer and chit-chating with all the other finishers.  Pictured below is group shot with the very well known ultra runner, Sophia Shi, who finished in 5:30 and has run marathons or longer distance in all 50 states and nearly all continents - she plans to finish her last continent Australia soon! 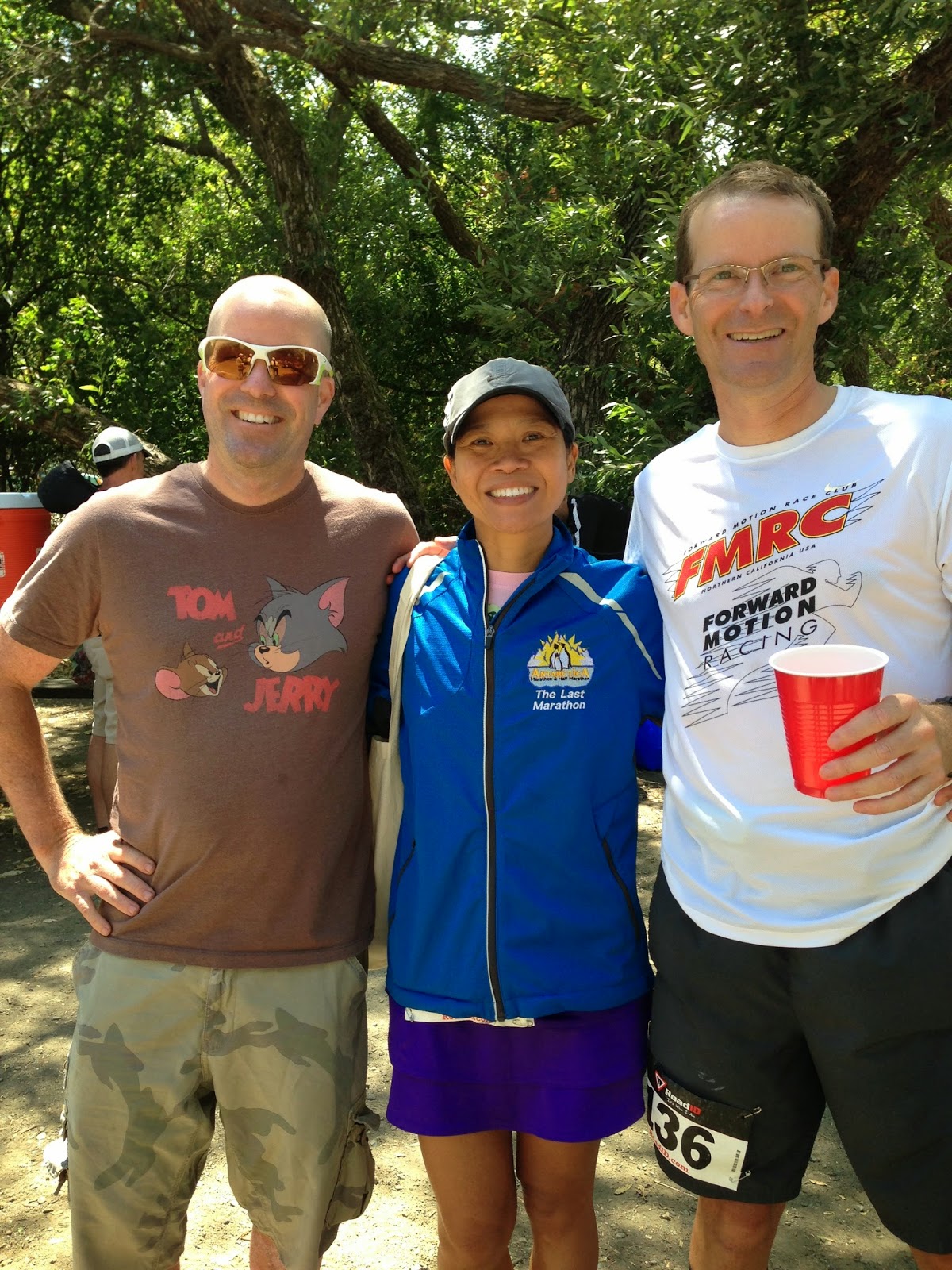 Figure 8 course as captured by my Garmin 410 and reported on Strava. 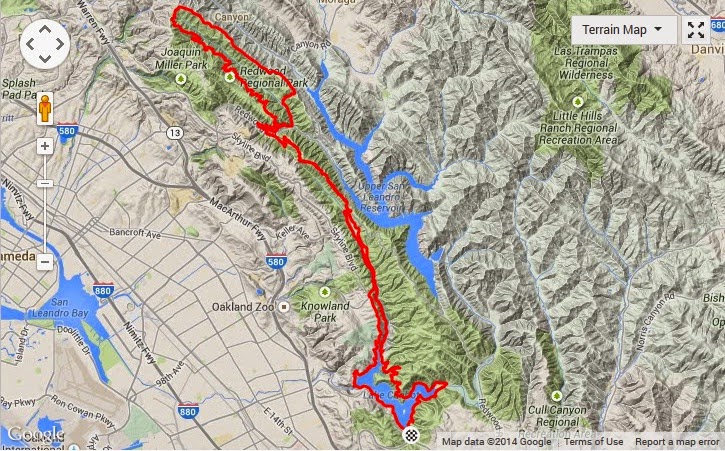 Looking forward to tackling the DC Fireroads 50 miler in October!