If you would like very detailed analysis of various GPS watches then I suggest you read DC Rainmaker's reviews:
After running with both watches on a 50K trail race today, I'm specifically going to compare one of the Suunto Ambit 2R (2R) four GPS modes called 'OK' with that of the unchangeable Garmin 410 (1 data point every 4 seconds mode - Similar to 2R's 'Good' GPS mode).

The 2R has four GPS modes:

The Skyline 50K trail course was 'measured' by the race director (RD) using Nike Tailwind and is believed to be 31.3 miles with 4,750 ft gain/loss (via USGS Topo! software) on the loop course.  Both numbers probably have 10% variance.

Here is what was measured by Ambit2R and Garmin410:

Clearly the 2R only recording every 60 seconds in 'OK' GPS mode was having a difficult time determining distance and elevation gain.  From an end-users point of view, I found the displayed 'pace' value more than delayed by just a minute and was often frustrated waiting minutes for the watch to catch up to my actual pace.  I ended up using the Garmin for pace feedback.

It is a long distance trail runners dream to have a single watch that can log GPS data for 25 hours!  However, the 'OK' mode logging data every 60 seconds is mostly useless (for me).

I have another 50K coming up where I plan to wear both watches again but this time I will use the 2R in 'Good' mode which logs GPS data every 5 seconds (comparable to every 4 seconds for the Garmin 410) and the 2R has a reported 12 hour battery life (again compared to 8 hours for Garmin 410).  I will update this page when I have additional information to share.

Update :  I recently ran the Overlook 50K and ohh what a test of battery life that was.  The race was a point to point race with RD reported elevation gain and loss: 7,000' gain / 9,200' loss.  I took 9:10 to finish the 50K due mostly to the 98+ deg heat in the canyon and extreme dehydration.  The Ambit2R automatically saved the race and shutdown at 3% battery at about 8 hours; the Garmin 410 amazingly was still going after I finished, then died 10 minutes after.  I don't know if you can disable the 3% auto save/shutoff 'feature' of the 2R and am currently investigating that. However, I did NOT get the advertised 12 hours out of the 2S only about 8.  The Garmin 410 actually performed much better. There is no point in trying the Ambit2R in 'Best' GPS mode given I only got 8 out of the advertised 12 hours of battery life.  I have purchased a Garmin 310xt multisport watch because I mostly run, found my Garmin 410 to be solid tool and the Garmin 310xt is supposed to have very good battery life (>12 hours).  We shall see on my next 50K!


PS Both watches were charged to 100% full battery and after nearly 7 hours of running I had 13% left on the Garmin and 78% on the 2R.  Reducing the GPS sampling frequency truly has a remarkable impact on battery life.  These pics are from after the Skyline 50K race. 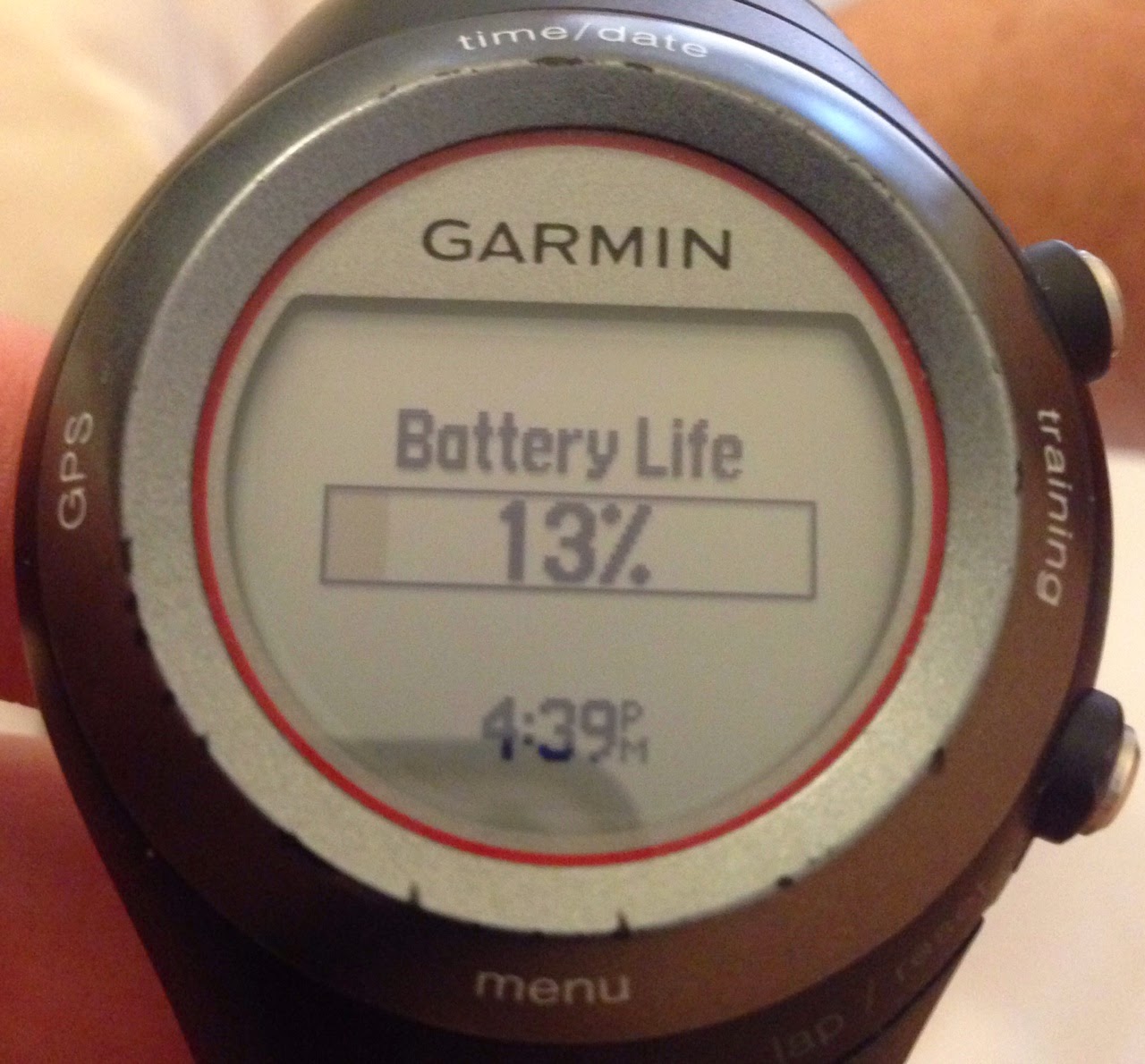 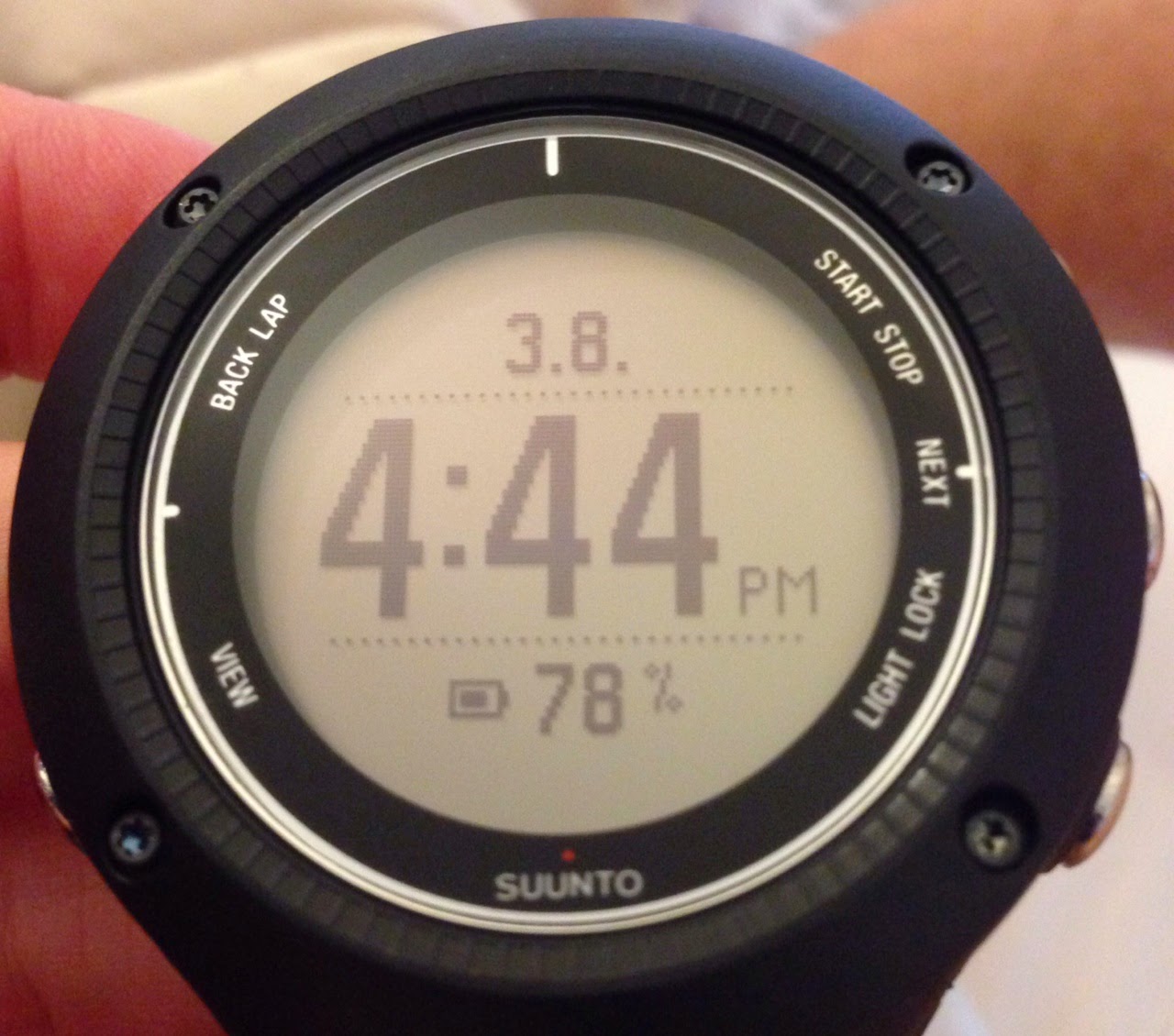