Last year (2013) I ran Inside Trail Racing (ITRs) 50K and almost Did Not Finish (DNF).  You can read last years report here.

I honestly had difficulty sleeping the week before the race in anticipation, reviewing how I was going to handle each leg of the race and if I could handle the warm weather.

Well, the running gods smiled on all of us cuz not only did it not rain us, although it had rained the night before, it was also cool!  Last year it was 55 in morning with high of 87.  This year it was 50s with high of 65!

Here's a front and back pics of the group getting final advice before we head out.  I believe it was a mixture of 50k, Marathon and 35K that head out first. 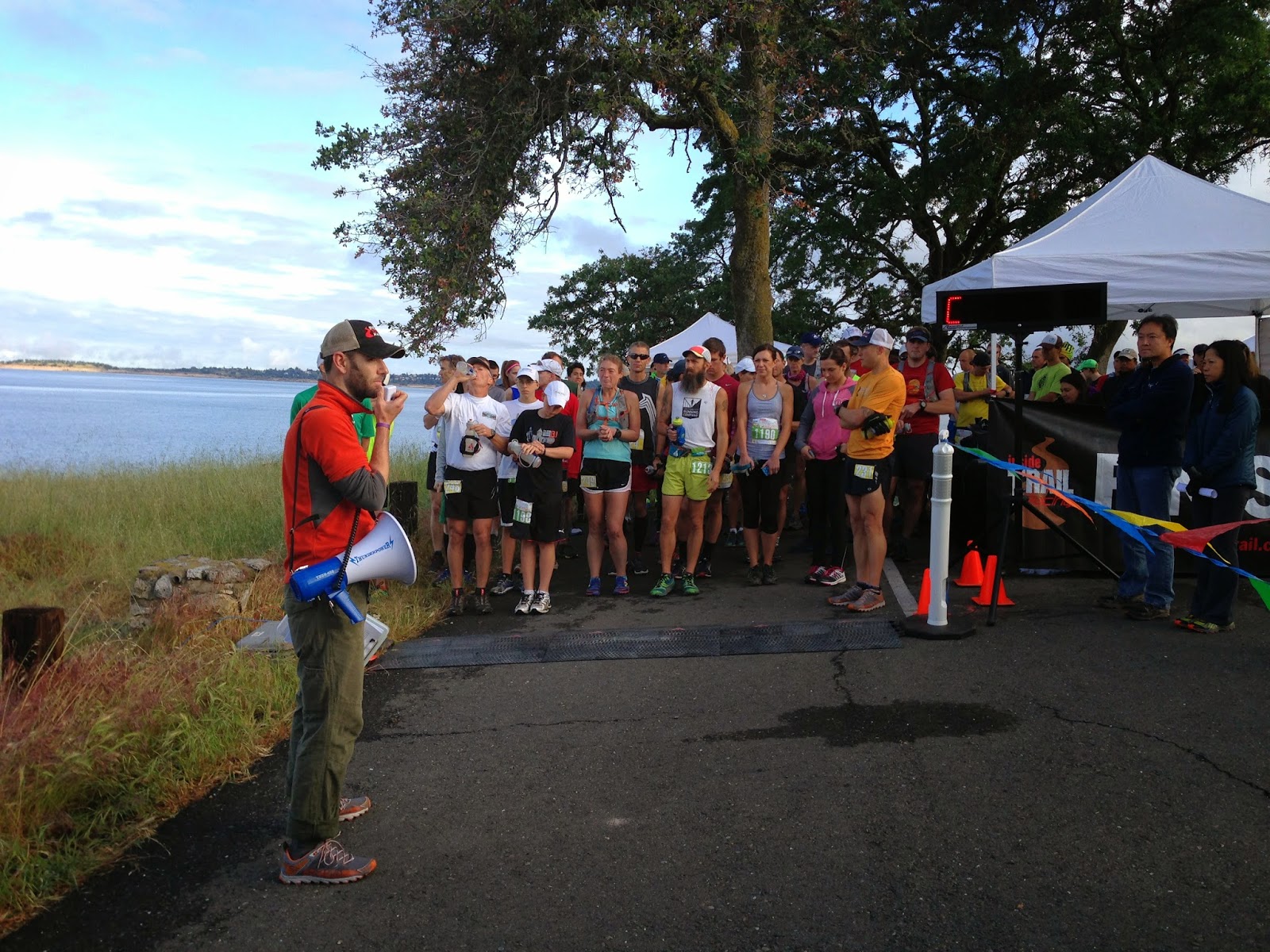 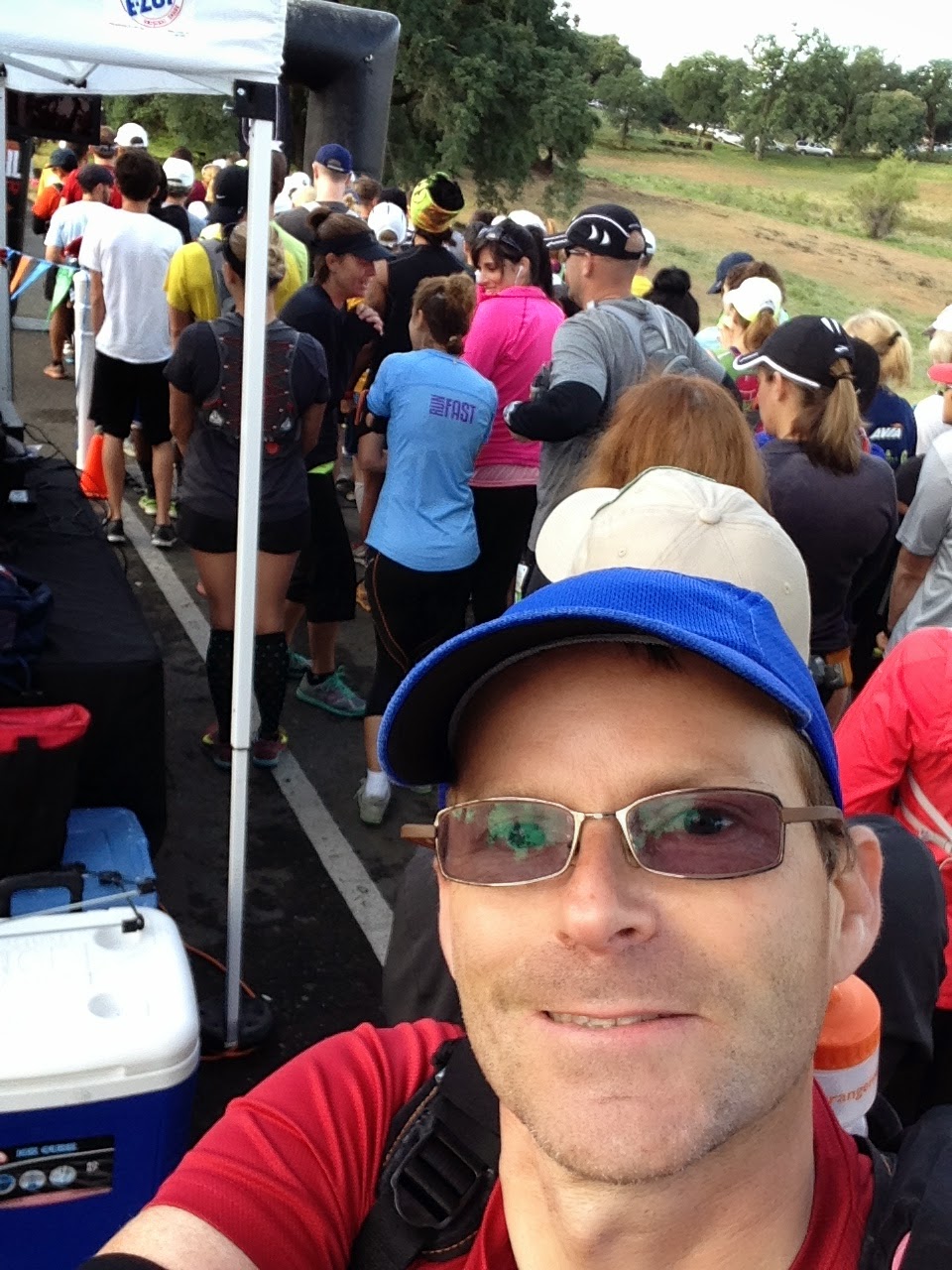 I was lucky and caught fellow San Francisco Marathon Ambassador, Alisyn at the start who ran the half marathon I believe and was cheering friends on. 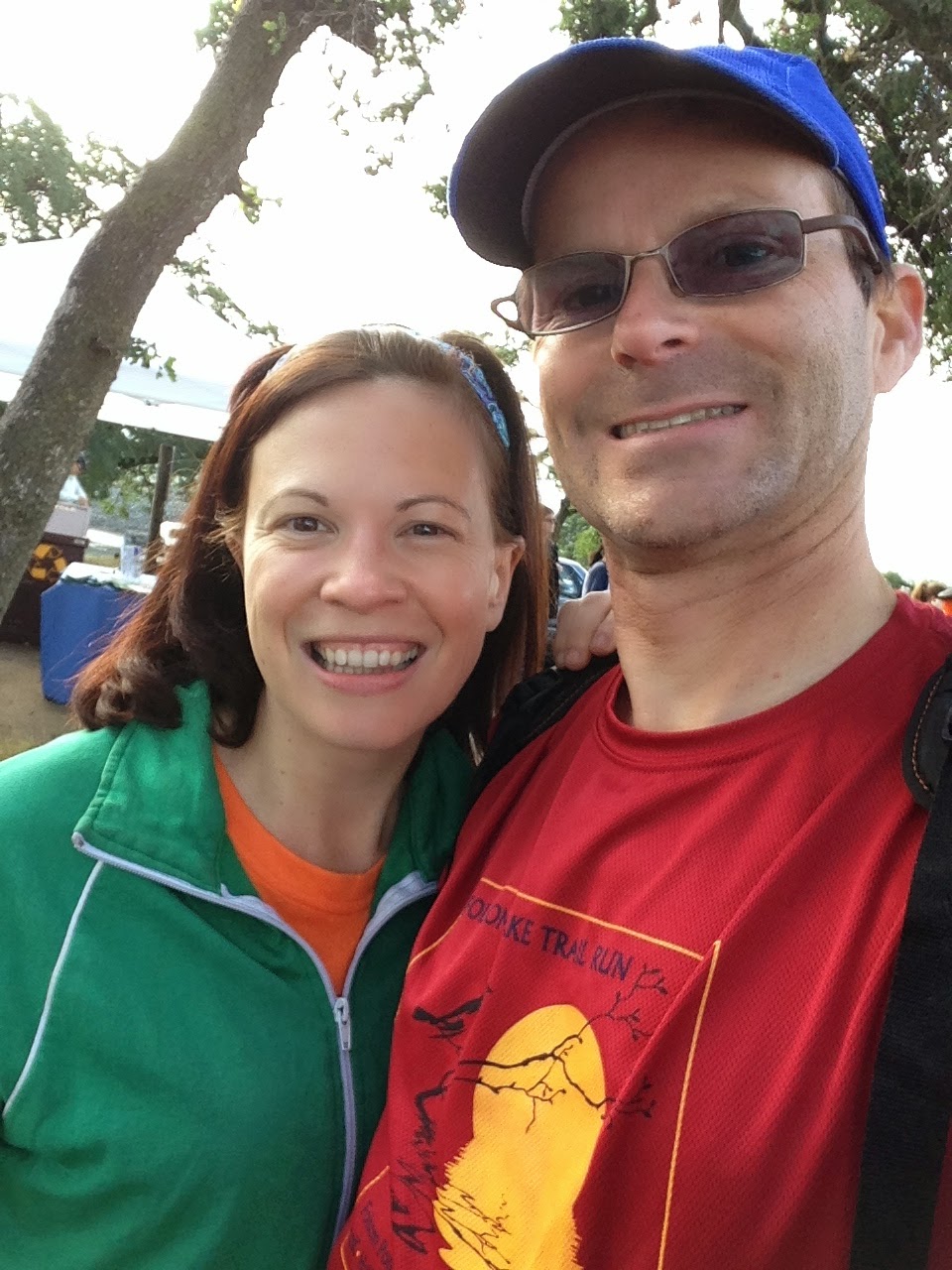 This year I planned to run a very different race - a smarter race.  I was going to go out 'slow' at no faster than 9:30 min/mile pace and hold that for most of the way going no slower than 10:30 min/mile.  My goals of course were to beat last year's pace but to finish strong and feel OK afterwards.

One 'trick' if you will is to avoid the Aid Station (AS) at mile 20.5 going out because it is on a road that you have to climb a little hill to get to.  IF you have fluids and fuel then save yourself 5 min.  On the way back after the turn around it will be on your left at mile 5 or so.  Unless it is hot and you need ice avoid that AS.

The reservoir is low this year but the colorful lupid flowers are still out in a rainbow of colors.  Again the weather was cool, the fields green and the poison oak not that bad. 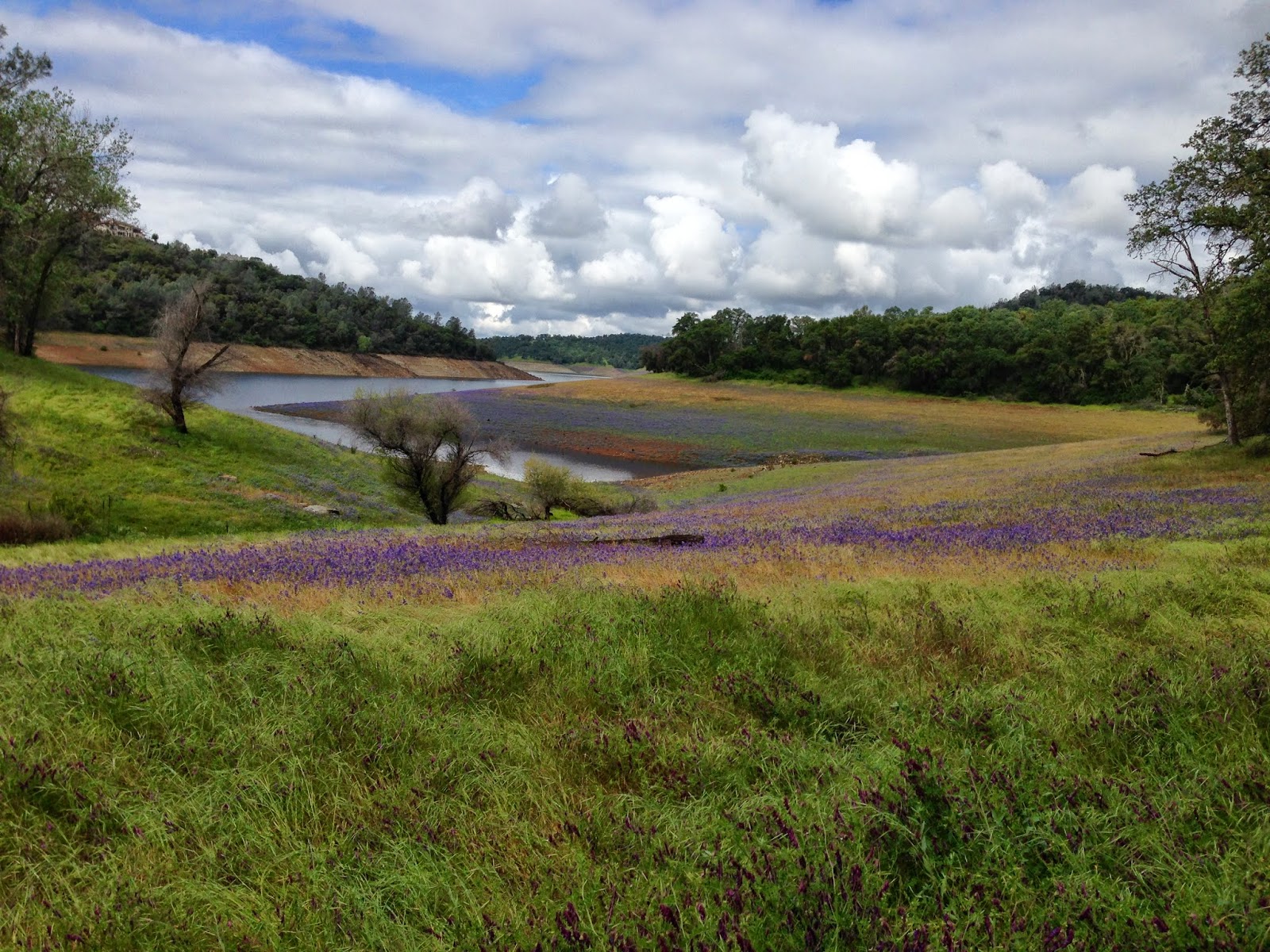 Here are your best friends in the whole entire world - AS at the turn around point - mile 15.5.  There was a ton of treats waiting including ice, boiled potatoes and nearly everything else.  Plus super cheerful and helpful volunteers.  Love these guys! 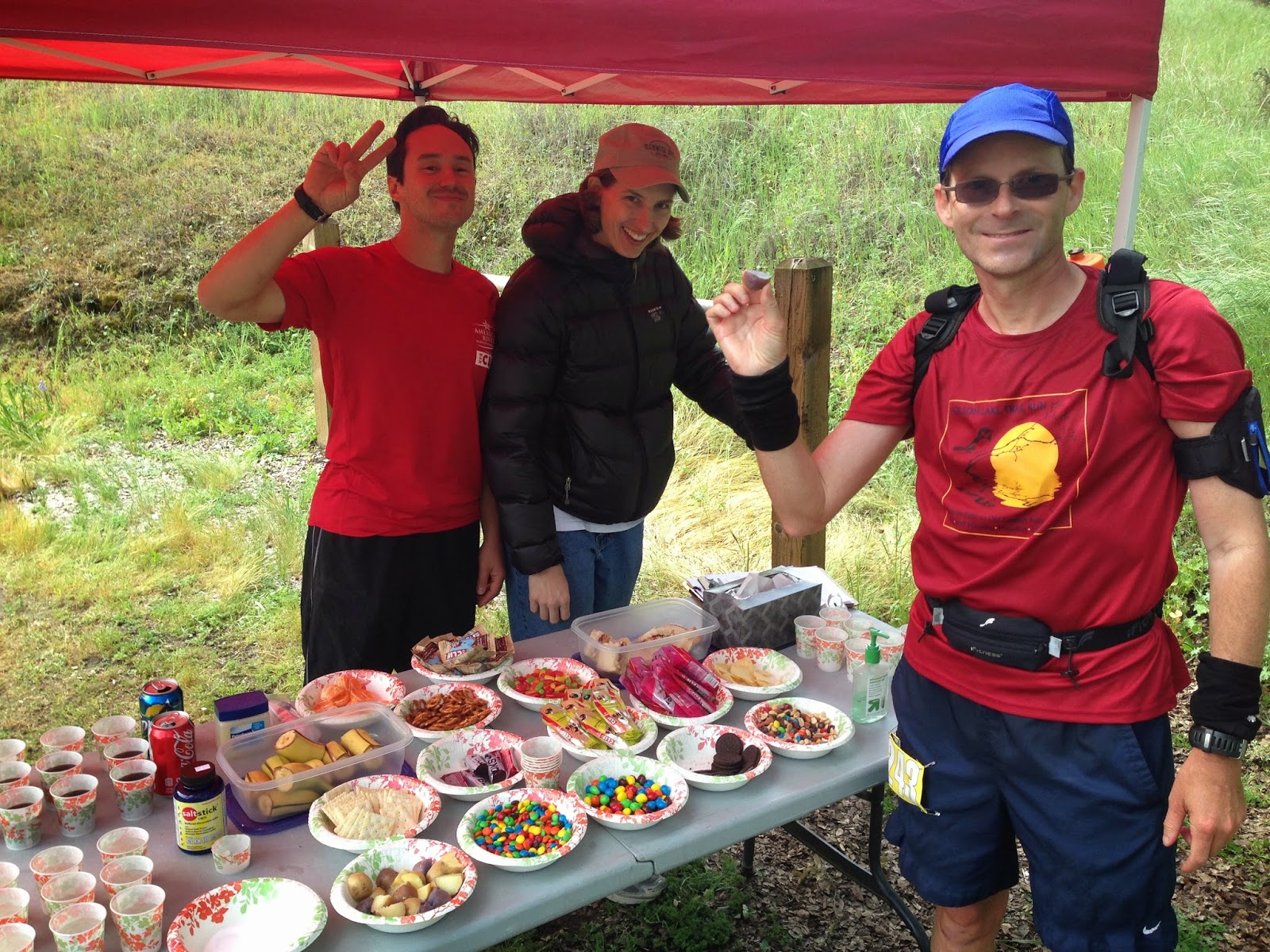 My official finish time was 6:25 nearly 1hr 30 min faster than last year but next to last place in my age group!  I think my AG had 13 and I was 12.  No worries.  I was VERY happy with my time and I felt fantastic at the finish.  No pain.  Tired but not sore. 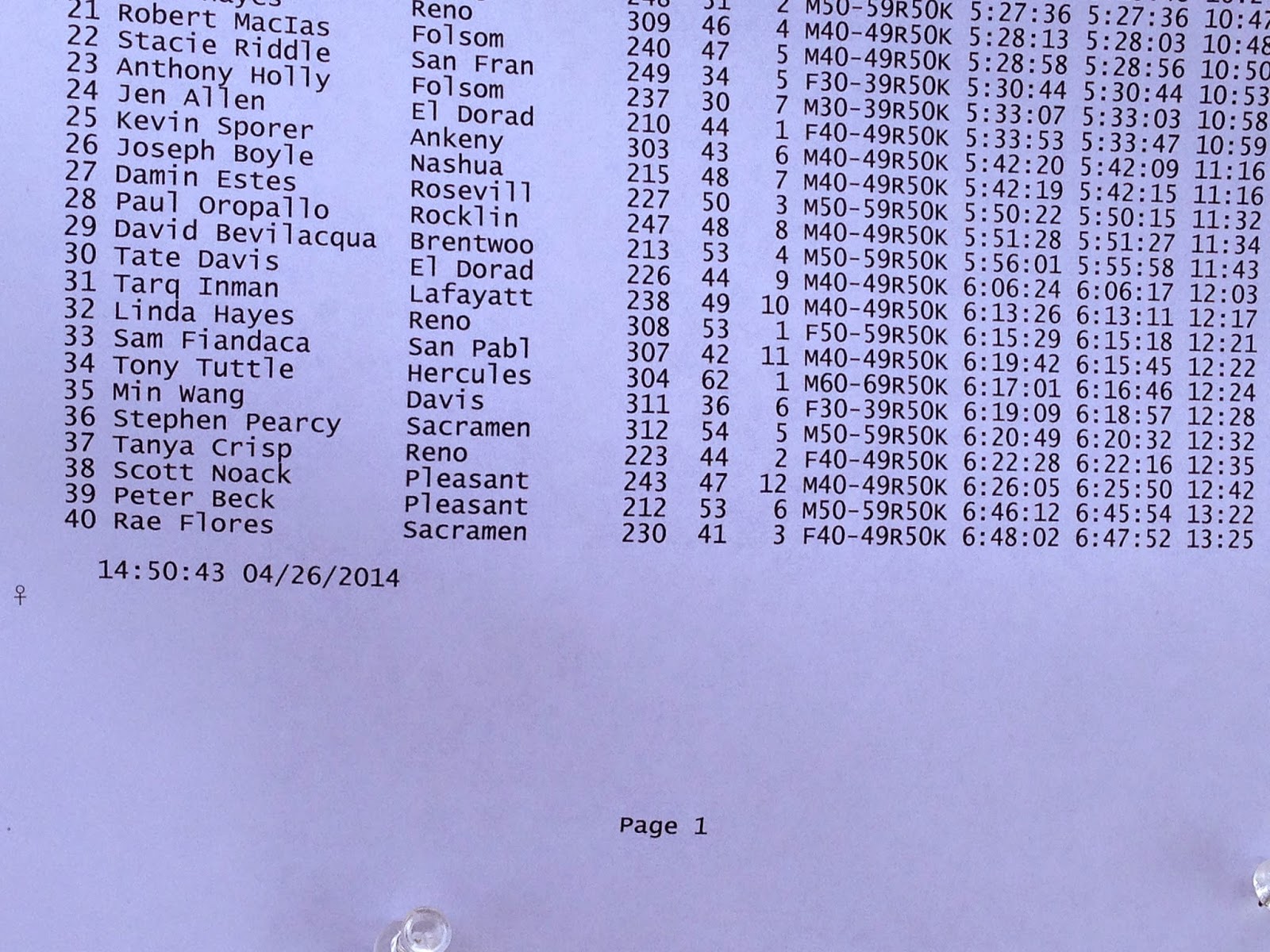 I did do two things that I normally don't do.  Firstly, I got a massage and even though initially it hurt like hell my legs felt less stiff and I think I recovered faster because of it.   Secondly, I waited until the last call of the day at 8 hours since many people waited nearly that long for me last year.  There were three on the course : one that came in 7:30, one at 7:45 and one that didn't make the cut off.  The ITR folks are GREAT and many waited until the final call, all applauded the last runners - there is even a medal for last place - I may have clapped a little too hard for the 7:45 guy that came in. 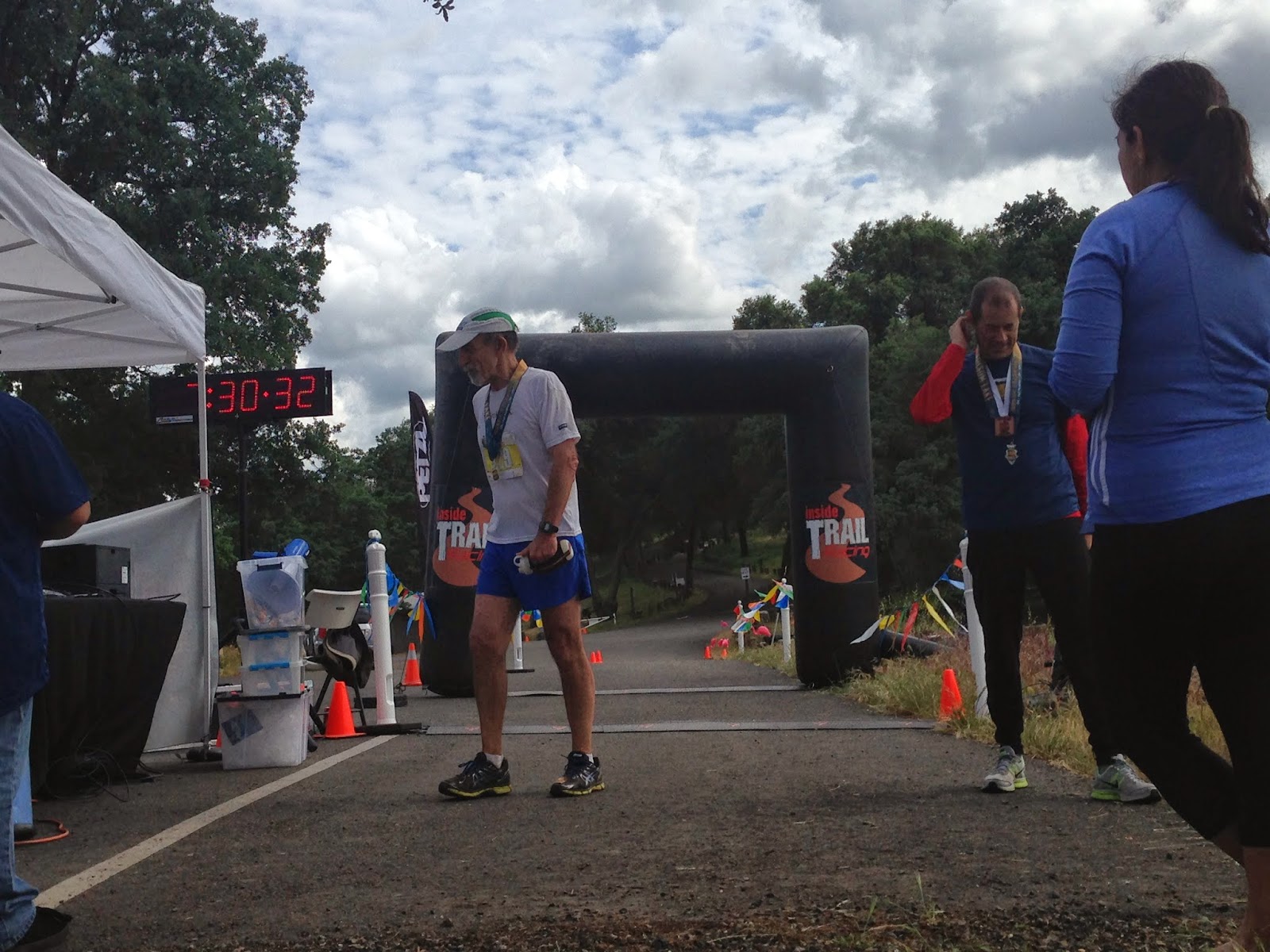 Mesh compression calf sleeves were big hit again to keep the poison oak and grasses at bay.  Two new items performed well : my Hoka Stinson's (below) and OrangeMud single quiver because it kept my hands free the entire time.

As far as nutrition I'm on different plan than last year.  This year I took 2 scopes of UCAN before the race and at the three hour mark.  I complimented the UCAN with one GU every hour plus boiled potatoes at AS.  That's it. 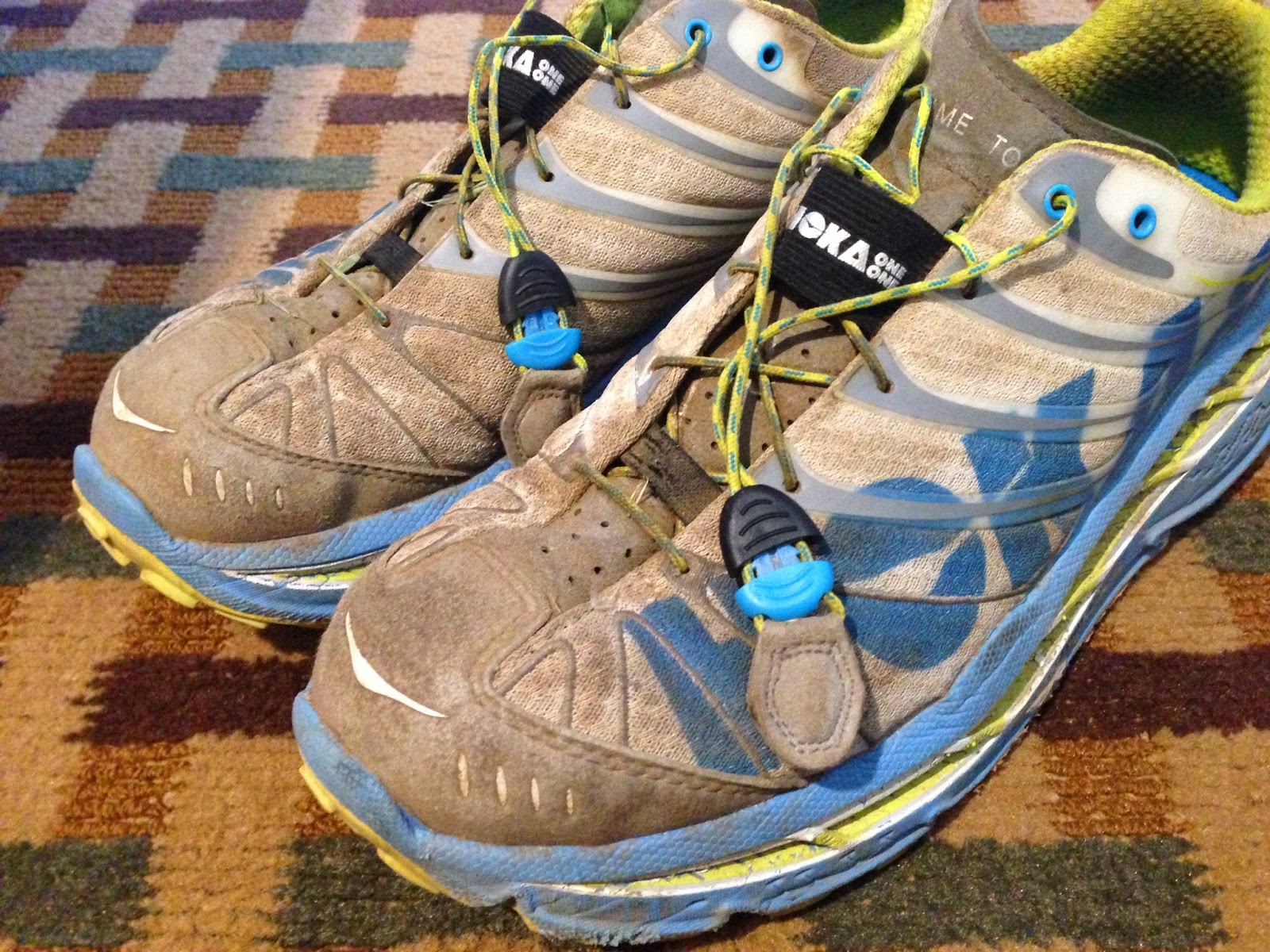 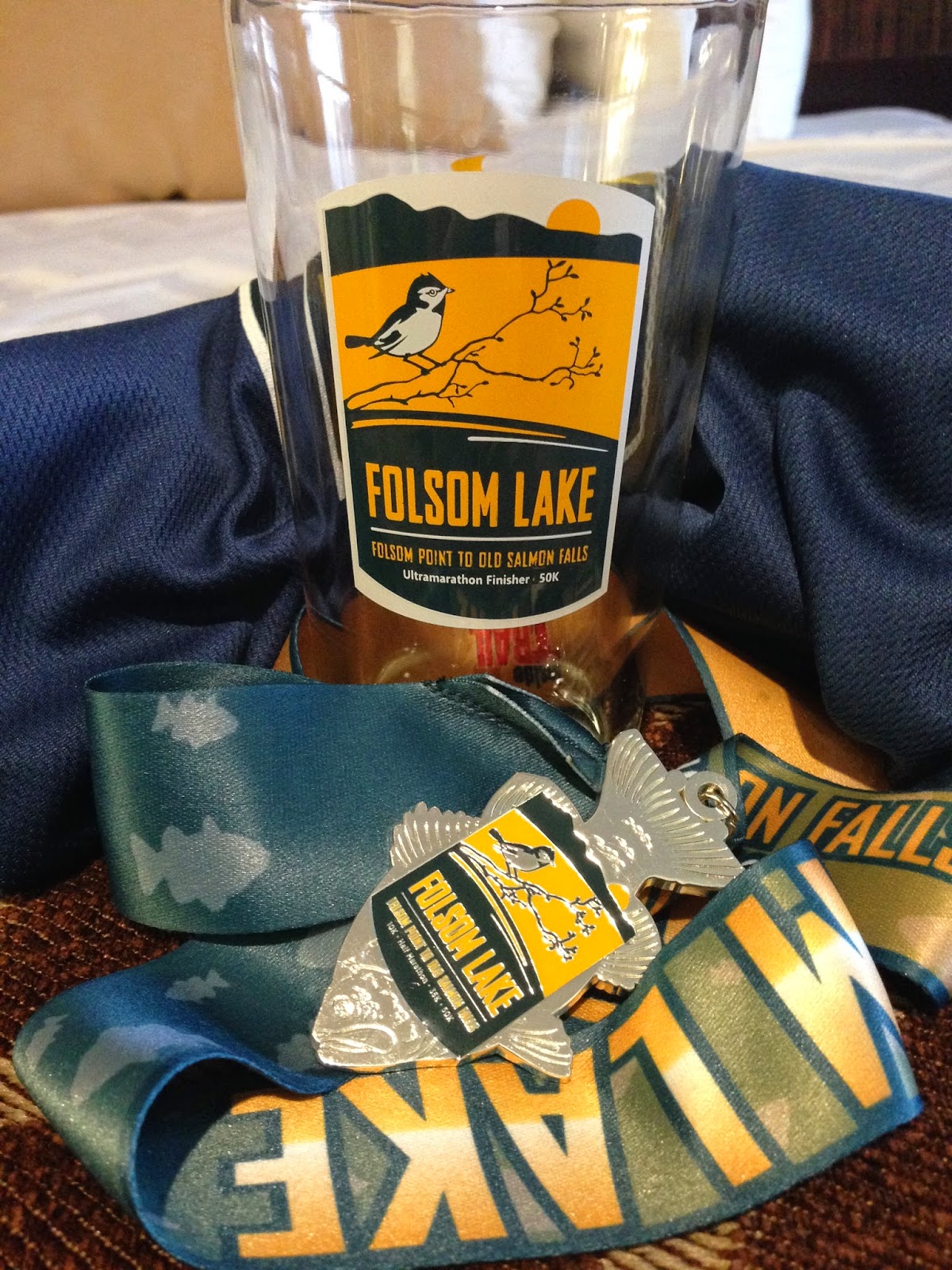 Went back to motel in Roseville and had recovery sushi with my eldest son from UCDavis. 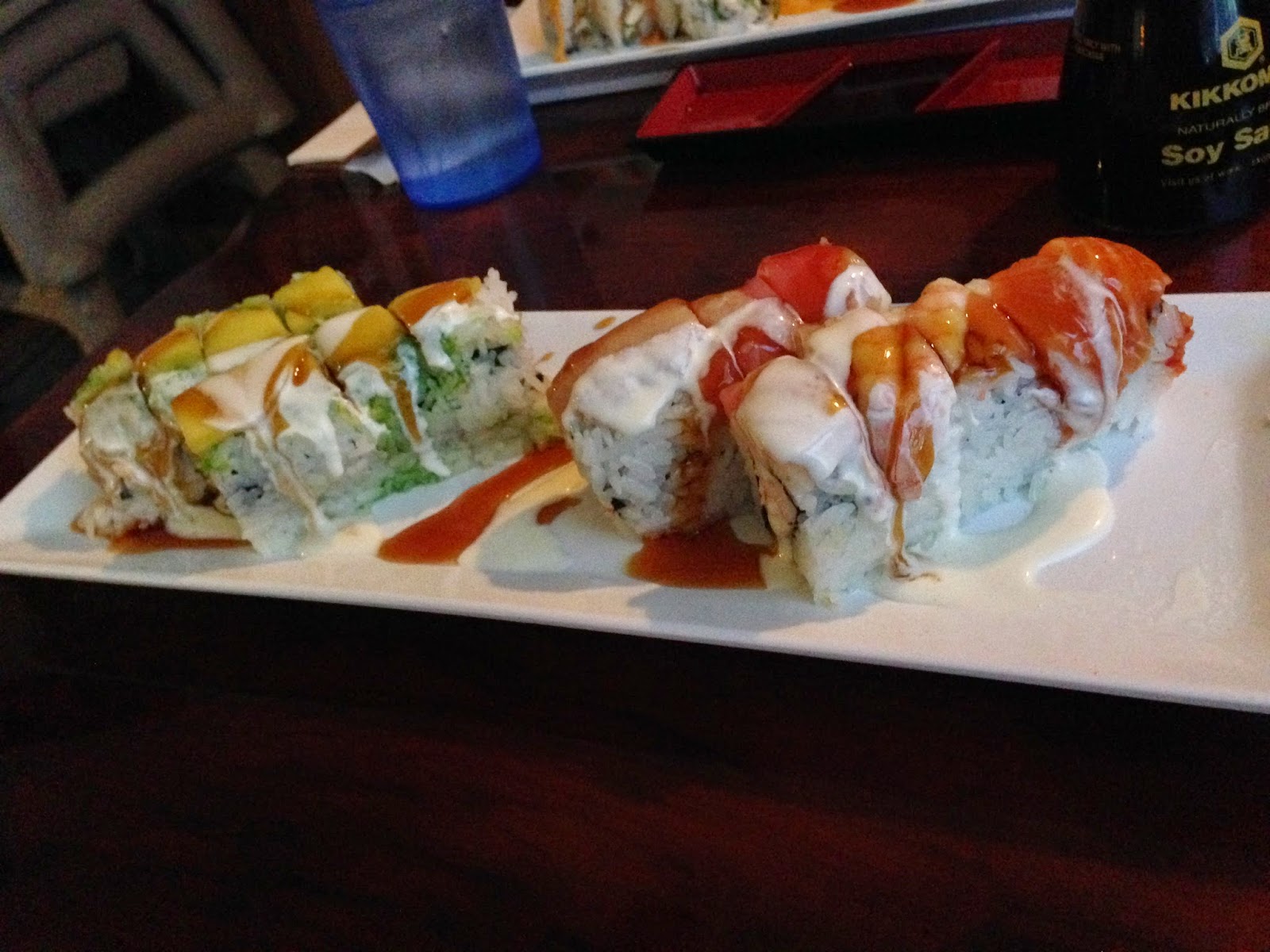