Arrived late to downtown Sacramento because we had to run some errands but was still able to park off L Street and walked the couple of blocks to the Convention Center.  Bib pickup around 3PM was quick and orderly.  The outrageously long line that stretched along the convention center turned out to the the optional chip validation line!  Of course we queued up even though technically not necessary because many, many years ago there someone had a chip problem that prevented a PR or BQ.  Chip was fine as expected.  In the excitement of verifying my chip, I forgot to pick up my technical shirt so add to my to-do list to contact the SRA to see if they can mail it to me!

Eventually we made it back to the car and found out we parked right next to Hyatt Regency where we booked a room almost a year ago.  Check is was very efficient, room was nice, service excellent and there were numerous nice restaurants to eat at.  The mini-highlight was not only checkout extended to 1PM because of the race but we were awarded the coveted $50 'late' checkout giving us until 6PM to checkout!

The iPhone, wakeup call for 4:30AM knowing bus pickup was 5AM at the hotel.  Theory was that any earlier would be unrealistic of me getting up and 30min would be enough to put on my layers that were all nicely laid out on the chair. No problem right? 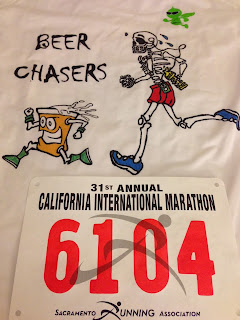 Did my business then headed down to the lobby to see how many crazy people were waiting for the bus.  OMG, the lobby was packed and it turns out that not only do guests congregate but all the nearby guests come to the Hyatt as a pick up location.  The air was cool in the lobby and arctic outside.  As soon as the school buses started pulling in it was a stampede to secure a ride.

Bus ride was uneventful for the first 30min.  People were connecting, reconnecting, telling of past races, nice carbo-load diners the night before or expected race times.  The gentleman sitting next to me from Eastern Canada had run Boston several times but had a heart issue he was recovery from and this was to be his last marathon and happened to be CIM.  Was a pleasure to hear his story and ride with him on his last race.

Nearing 15min left to the start, my head started to spin and something was going on with my GI track.  I mentioned this to by neighbor then asked driver to pull over.  Driver said we were almost there and there would be a million porta potties to choose from.  I sat back down and within 5 min of the destination what we all dread the most happened.

After the bus stopped I was the first off the bus and sprinted to the 300 porta potties - was a heavenly sight!  Took off my racing pants and tech undies did what I could to minimize mess then redressed in 22 deg weather.  I made it to a continence store and was able to buy some generic anti-diarrhea meds for like $1.50!  After popping pills, moved around like the rest of racers until 15min prior to start then undressed out of my nice and toasty Wall-mart special over sized sweats and parted at sweat-check.  Sweat-check vans were by number but volunteers would take yours and make sure they got to the right area.  Very efficient and pleasant volunteers.

The approximately 10,000 racers piled into pace groups and start was on time! I was in the 4 hour pace group with the hope of staying with them in sight the entire race. 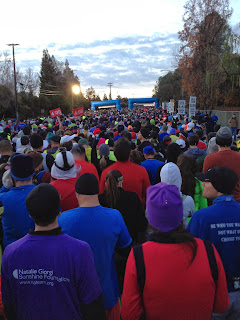 Our race club probably had 20 participants but was only able to see one amongst the sea of faces.  Lisa was primed and ready to go! 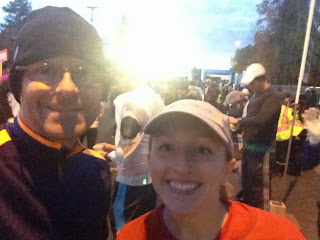 Here is short Instagram video of start that sorta captures the excitement of the start.  I wasn't even sure I was going to make the start giving my early morning GI issues to no one was happier than me that we were finally off!

I didn't count all the bands and interesting characters along the course.  However, my overall feeling is that CIM has more number and better quality bands than any Rock N Roll race!  I really enjoyed a band playing 'Ring of Fire' around the half marathon mark and really, really enjoyed the beer samples around mile 23.  I was trying very hard to hold back and still finished the first half in 1:58.  It feels like you are running down hill for 13 miles!  The black ice areas around water stations was something near and took a few unsuspecting runners by surprise until folks caught on.  Volunteers stepped up and would warn runners and put pylons or some kind of marker around troublesome areas. In general all the volunteers were extremely helpful.  A couple water stations couldn't keep up with demand but it all worked out.

I paced the 4 hour group till about mile 19 then noticed I started to fall behind and my paces slowed by an entire minute.  My assumption that I trained enough and had enough reserve from holding back on the first half wasn't working out.  I ran into my friend and best running buddy, Andrea, around mile 24 or so and we tried to push the last few miles.  She was struggling with the aftermath of a cold but looked pretty good. 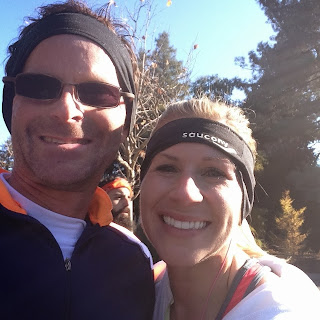 We both finished around 4:20, extremely glad we finished and in search of calories and warmth.

Overall, the course is VERY fast as advertised which is not normally true of most races.  You can see the elevation change below and can feel the slop as you are running along for most of the race. You may hear some say there were a few hills to climb. Nah.  For any trail runners out there there were no 'hill's at all.  You pretty much run downhill for 26 miles!

Many new experiences both good and bad.  Took 15min off my previous PR and finished without freezing to death. The warm vegan butternut squash soup was almost as heavenly as the tall eggnog latte I had at Starbucks right after the race.  I'm not sure If I'm running CIM next year but If I do I'll prepare better in the morning and stick to the four hour pace group like glue! 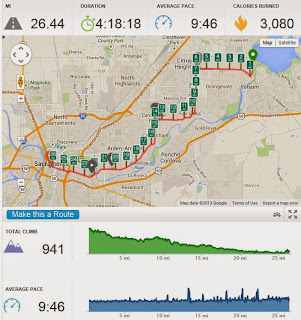