Berkeley + Beer = Fun
It must be said up front that we were expecting to see more Bears and a bit more Blue and Yellow but hey.
For those that didn’t pay the fee to have their bibs snail mailed to them you got to checkout Pyramid Alehouse on Saturday the night before the race and sample some local beers.  The pickup was efficient but no schwag stations so a bit anticlimactic for some of the first time racers.  My bib was missing and had to first check to see if my bib number might have changed on the four right-most computers (it didn’t) then went to the left most computer/attendant to have a new bib number issued.  First time my bib number was misplaced but a it really didn’t take very long to have a new number assigned.  I got a slightly faster wave number and the D-tag didn’t have my name and age printed on it which is required (or a photo ID) to get into the beer garden in the finishers area.
Race morning was very well organized with lots of porta potties, parking was easy if you arrived early (one hour before race started) and we pretty much started on time.  Morning temperature was a brisk 45 and much better than the 37 inland.  Everyone was friendly and actively moving about to keep from freezing.
The first few miles of the race felt like you were running downhill the whole time and was a very pleasant experience.  Yes, it was hard to hold back and run under your expected race pace but the pacers (2 per bracket every 5 min!) were expert and started off slow and gradually ramped up to race pace.  I have not experienced a better group of pacers before.  Well done.
I happen to be in the back of Wave 2 (four waves I think before 10miler, then 10K) and was literally between the 2 hour and 1:55 pace groups.  I ended up finishing just past the 1:55 pace group with a 1:54.  Couldn’t heap enough praise on these pro pacers.
The course itself is a bit of a bizarre in that there are multiple switchback/roundabout where you meander around Berkeley culminating in a sizable hill 0.1 mile before the finish line at Golden Gates fields – which I suspect runners will be talking about for sometime. 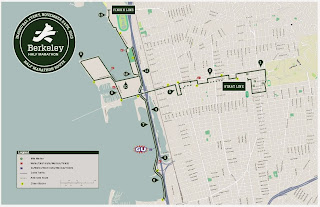 There were a couple of bands, lots of mixed road/trail to run on.  Lots of pot holes and a few muddy areas to keep you on your toes.   The mixing and splitting off of the three different running groups was interesting.   One of the most beautiful stretches of the run and also most congested was the bit of trail along the bay.
There were at least three beers to choose from in the beer garden hosted by Pyramid of course.  The IPA was very good. We had several PRs and at least one age group medal.  Great race day! 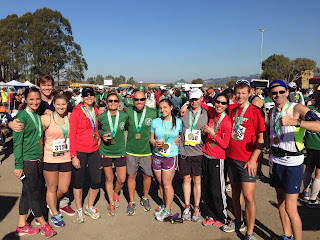 Would I run the race again?  Hell ya.
Posted by Scott Noack at 3:44 PM