Sunday / Sunday : Back to back half marathons and recovery.

Didn't plan it but decided to see if I could handle 'back to back' Sunday half marathons.  Since I'm on a perpetual marathon training program and do half marathon distance (or longer) every weekend I thought running two consecutive races shouldn't have any impact at all.  Was a naive thought.

Below are the race splits from Half Moon Bay on 09/29 (left) and San Jose Rock in Roll on 10/06.  Both races are flat, both had cool mornings (~55) that warmed up towards after noon (65 in HMB, 85 San Jose), HMB was an out and back, SJ was a loop, both had you traversnig through residential neighborhoods.  One obvious difference was that HMB had 2000 runners whereas SJ had 16,000.

I was able to control my pace rather well at HMB and could actually see the little lag between when I took a GU and a pop in speed (between mile 7 and 9).   In SJ, I was fine for the first 6 miles then something happened. Just lost pace/energy and basically had to push from 7 all the way till the end. A mini-wall if you will.  Times are close but I was noticeably slower and more tired after SJ.

In between each race I did one practice run and some core workouts.  I didn't do any cross-training and my conclusion was that I just wasn't recovered from the first HM.  If I do Sunday to Sunday HM again, I think I'll attempt to do some spin classes to get my aerobic system and legs back to normal faster.

For this week I plan on doing some short ~4 mile runs after one day off then jump right into stationary bike spin/core workouts to aid in recovery. 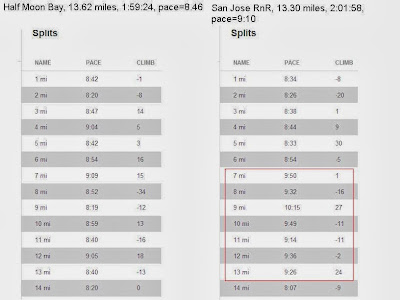