Run with the Bulls ... really?

We've all seen footage of the great bull run in Pamplona, Spain or have read about 'Running with the Bulls' in Hemingways bibliography, etc.  However, how many of us really want the same experience?  Well, apparently enough to justify such a run with locations throughout the United States including right here in California.

I don't know anything about the hosting company, but there are more than one planned location according to their website.  In fact, there appear to be more interest on the East Coast than West.  Or, maybe craziness just starts on the East first then slowly migrates West? 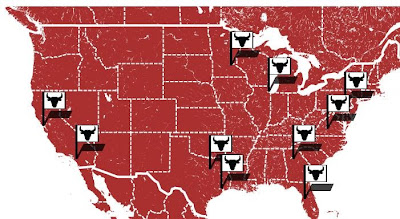 And, if running with bulls isn't enough for the adventurer in you there is also the advertised tomato royale afterwards to burn off any lingering adrenaline/testosterone. Yes, if I was 18 again I might just need a bull running behind me for motivation but at my Masters age I'd rather run along an empty trail or possibly chasing behind a pony tail in tight running shorts.

According to lore, Hemingway also witnessed on July 13th, 1924 the first death in the running of the bulls, when Esteban Domeño from Sanguesa, was fatally gored...