It is now July and a month ago I was lucky enough to squeeze in not one but two races in Taiwan during our bi-annual trip to visit the extended family.  Just to give some context here.  Summer months in Taiwan are 'tropical' to put it kindly; or, in other words hot, humid, sticky and down right hostile to human habitation.  Normal people 'race' from one air conditioned building, car or cab to another spending the minimum amount of time exposed to the sun and air.  Not many choose to run on purpose in the summer months of Taiwan.  Then again, we aren't normal, we're Runners!


My 'test race' to see if I could actually handle the logistics and weather was the Standard Charted Charity Run; since, it was only 12.5KM, located near my mother in law's house, was known to be well managed and most importantly had registration and payment instructions in English!

Payment and registration was done in the States two months before the race and was easy  and inexpensive (600 NT or $30 USD)!  Bib pickup was done at tents in the Breeze shopping center downtown near Taibei 101 and was orderly and efficient.  Yes, the staff speak English but if you speak Mandarin or Taiwanese use it!  The packet consisted of a race number, shoe tag and a nice technical shirt from Adidas I believe. 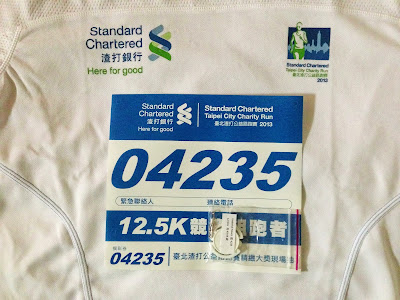 The start and finish of the race was at the Presidential Hall in XinYi District.  Start time was 5:30AM which initially I thought was crazy early but given temperature range was 70 to 90 deg F completely understandable.  Unfortunately, the MRT (Taibei's underground rail) and buses don't start that early but there are always taxis in Taibei.  I love Taibei taxi drivers.  Here is the gathering area at 5AM and yes it is light cuz sunrise was 5:05AM. 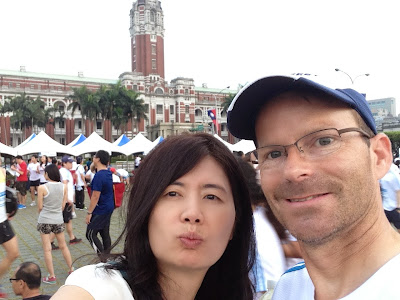 There were roughly 9500 signed up for the 12.5km race and the starting line was a mass of people. 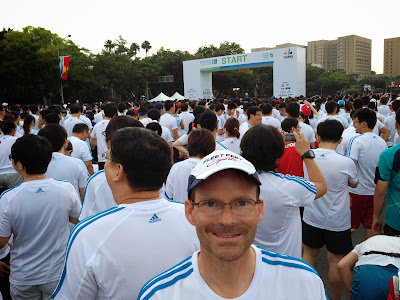 Took me about 1km to weave my way through the masses until I could settle in with runners around my target pace of 9 min/mile.

The course was a unique out and back that travels on the raised freeway pretty much from south-west to north-west Taibei.  See RunKeeper GPS map at the end.  If you think about it even at 5:30AM there is little chance of shutting down major roads in Taibei.  In fact, I'm not sure how the Race Director (RD) even got permission to shutdown the raised freeway for two hours.  Here is a shot at the turn around just north of the river in Shilin. 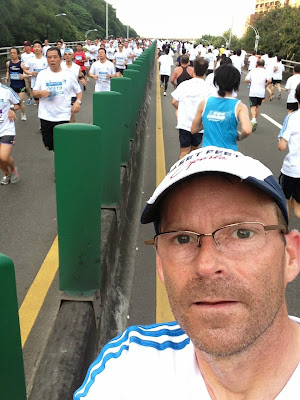 Then up again back to the overpass. Here is what it looked like three quarters in: 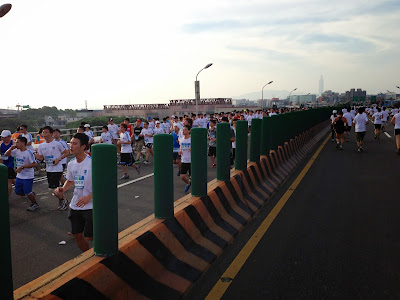 If you'll notice even though running is very popular in Taiwan now, runners typically don't carry water and don't use any fuel (GU, etc).  Most runners .... just run.  There were water stations that primarily served just water.  More and more runners use hydro packs and are stating to take electrolytes and other additives but is slow to catch on.  I had my 22oz hand held filled with ICE CUBEs and finished the entire bottle.  When I finally stopped past the finish line there was a puddle of sweat around me.  Not exaggerating.  My youngest son wouldn't even get within an arms length of me I looked so bad.  I can't capture what running a race is like in the Summer months of Taiwan except I imagine if you have experience in the southern US states (Florida) or in a sauna at your local gym.  Your body starts sweating and doesn't stop.  Then, your skin gets sticky and all your clothes, socks, etc just stick to you instead of gliding nicely. 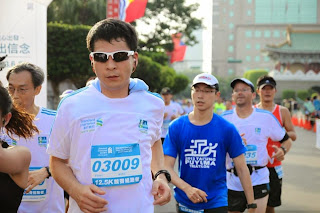 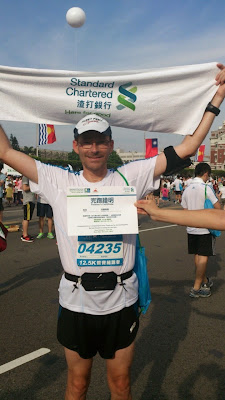 ﻿
After the race we hung around to see if we won the one million NT random drawing but sadly I can't retire because we didn't. 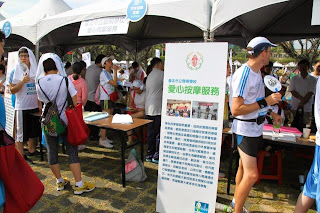 We were entertained by the 'Sexy Girls' on stage though. 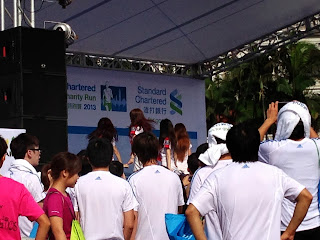 Why do we runners do it?  The reward of the finish and forbidden foods and drink of course!  Here is what my finishers breakfast looked like! 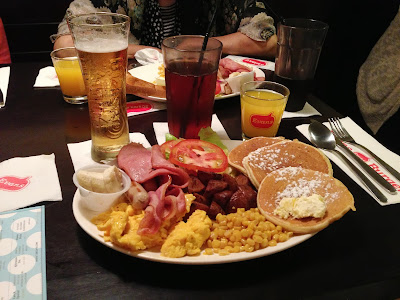 RunKeeper GPS map and stats from the race. 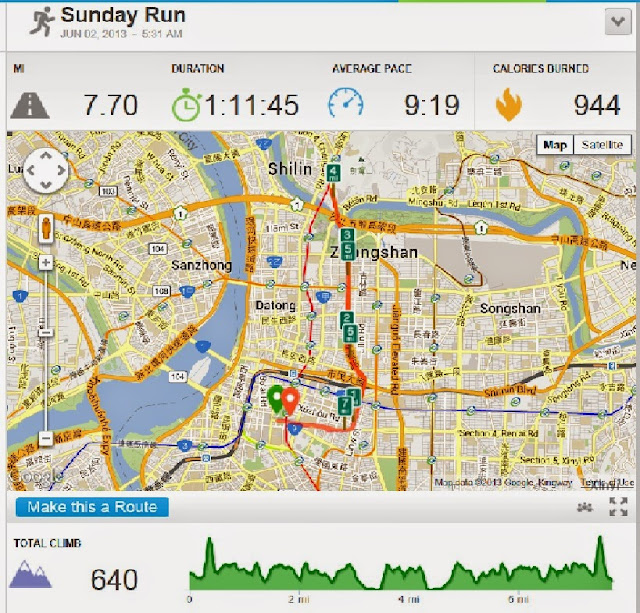 I forgot what my ranking was but to a large extent I didn't care. I was happy to have made it to the race on time and managed somehow to survive long enough to make it to the finish.  My overall finish was 1149/9500. 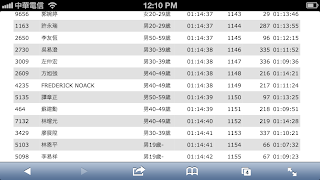