b) I had just run my very first full marathon (Napa Valley Marathon) on March 3rd and wasn't sure if three weeks was enough time to recover. [More on that later] 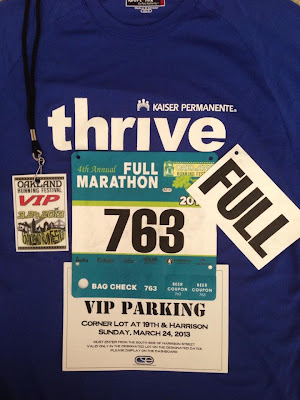 VIP parking was a lot right on the side of the starting line so no complaints there at all. There were plenty of 'blue rooms', sweat check, water and the like in Snow Park adjacent to the start/finish lane.  There was plenty of time for pre race photos such as the one below with fellow Fleet Feet Pleasanton Race Teammates : Andrea and Steve. 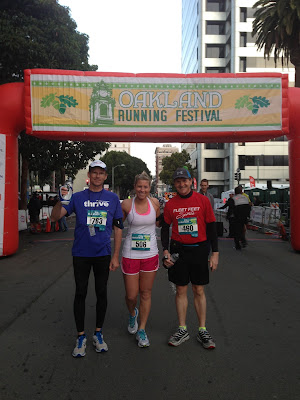 But amazingly within about 30 minutes of the start of the full there was a mad rush to line up and then there was a sea of runners.  There were unofficial pace corrals but not very formal.  I couldn't get a shot but the start of the race was a big BANG plus confetti which was a nice touch. 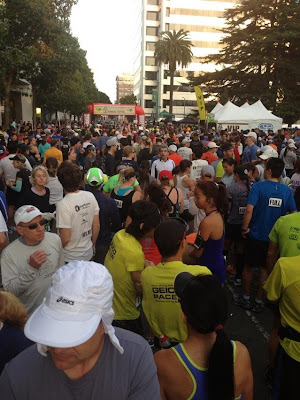 Half way through the race we came up along Australian's Marathon Man, Trend Morrow, a Discovery Channel cyclist who apparently was just running the marathon for fun.  Just a few feet from this shot, we spotted the 'Ultra' marathon man, Dean Karnazes, just warming up before he sped away with a circle of friends.  However, he wasn't quiet fast enough since Andrea was able to chat with him and thank him for all his running advice.  Dean is a really nice guy. 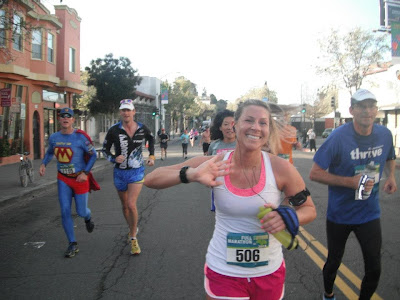 I did OK until we got to the half way mark in Piedmont Hills then I ran them a little too hard even though a veteran running right along side me warned me to slow down or she'll walk right past me around mile 18 - 'like they always do'.  Sage advice I didn't listen to and sure enough I bonked around mile 20 and she came along, gave me a wink, and finished ahead of me.  The FleetFeet gang waited around for me to finish almost 5 hours since the start and urged me to the finish line.  Can't have better friends and running mates. 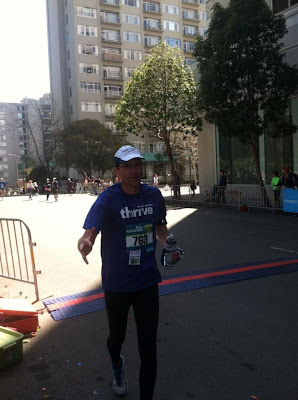 Marathon'ers had stubs on their bibs if I remember correctly for two free beers.  Beer, or any cold drink for that matter, never tastes as good as at the end of a long, hot race. 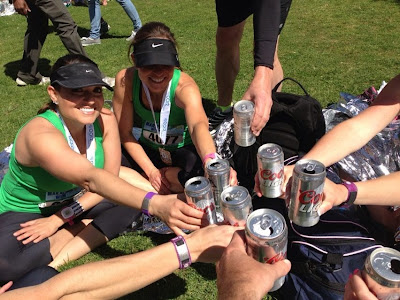 Official results were humbling.  I was nearly 15 min off my PR in NVM and mostly due to:

a) Not doing course homework, thinking it was flat, and running the hills incorrectly

b) Running the hills incorrectly by racing up, then pounding down and basically being exhausted by the time I got back to the homestretch flats around Lake Merrit.

c) Not allowing enough time to recover between races.  They say to give yourself one day of recover for every mile you run.  If that is true then in theory I should have been recovered for Oakland, but I wasn't.  Within a week of NVM I went right back to my marathon training schedule and was doing 35 miles per week right before Oakland. Worse, I had done a half marathon trail run in Del Valle, Livermore which just beat up my quads.  I started Oakland not recovered but spent. Lesson learned.  No more than 3-4 marathons per year with plenty of time to recover in between.  How does Dean and Trend run a marathon every day of the year?  No clue. Yeah, Dean eats lots of wild caught Salmon but I think some people are just genetically superior to others... 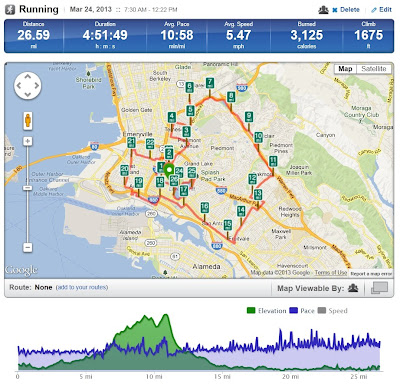