After I gained more confidence that I could figure out the logistics to run a race in Taiwan by completing the Standard Chartered 12.KM race, my sister in law helped me sign up for one of the local races called Ahgan Running Festival.  The Ahgan race is held in north-west Taiwan in the ZhongShan sports area.  Unlike the Standard Chartered race, the Ahgan race registration is in Chinese only and the payment must be done at one of the 7-Eleven Kiosks.  So, pretty much you need local help to join this race. 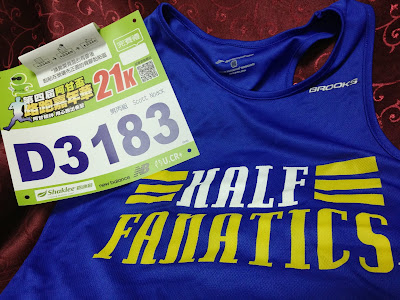 There was a large area in front of the stage to gather and chat.  There was also an adjacent center with plenty of restrooms which was a pleasant surprise. 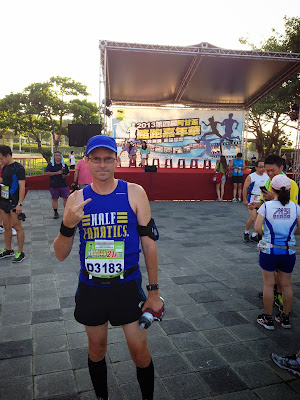 This was a out and back 'loop' run with plenty of road for the estimated 15,000 runners. 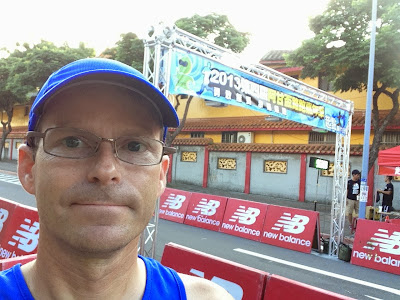 Below are the lines for last minute changes, bib pickup and a scanner where you could verify or register your bib ID number.  The race was also right next to the MRT which of course didn't help given the very early start time but was very convenient to get home or to a local pub to recover afterwards.  Parking was a mess and this is given the context of Taibei traffic.  Again, I love Taibei taxi drivers! 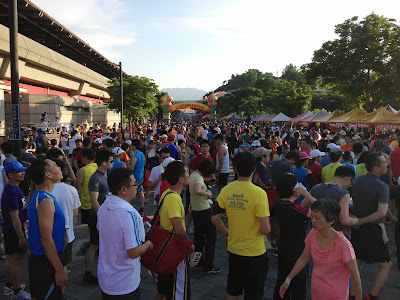 Below is my brother-in-law and our sons minutes before the gun went off. They all completed the 3KM. 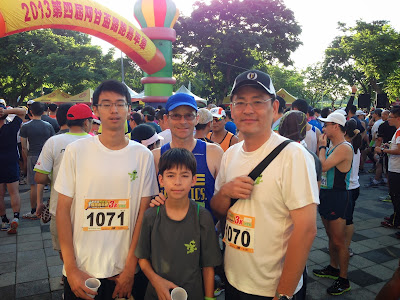 Here is a shot of the figure eight nature of the loop race where we are coming back and passing under the overpass from which we came. 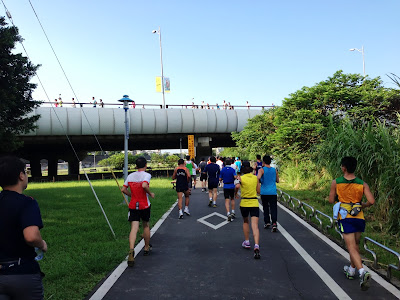 One of my favorite running shirts!  I think it names his region/district on the top. 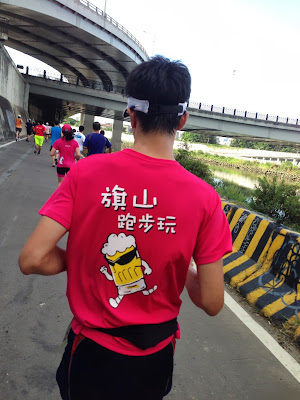 Here is a shot past the half way mark with a few of the new buildings north of the river.  The route was well paved 'park' with restrooms placed every few miles. Very nice. 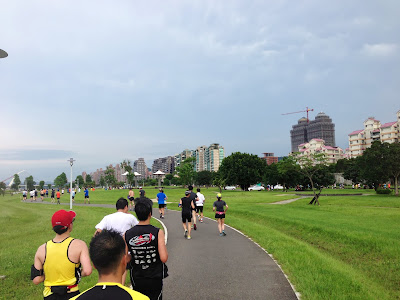 Finished the half marathon!  We were saved by having a somewhat overcast day, but it was still hot and humid.  The Aid Stations had water and sports drinks which was a nice surprise; since, a little salt and sugar was greatly appreciated. 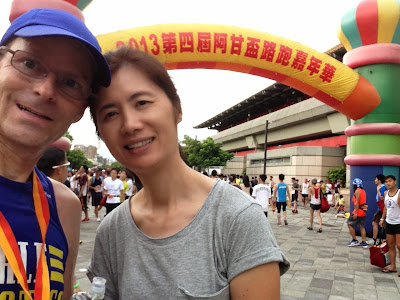 The Shaklee girls were out in force passing out fans to help cool yourself down and free perl milk teas.  Couldn't complain about either. 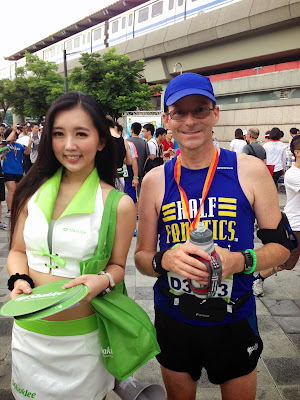 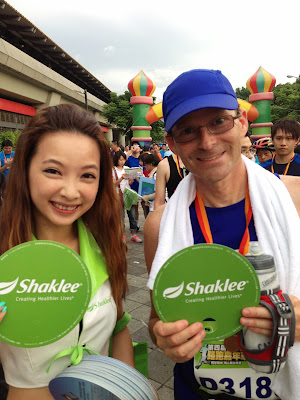 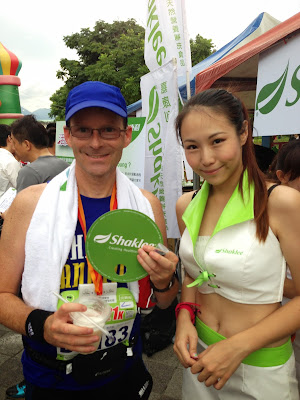 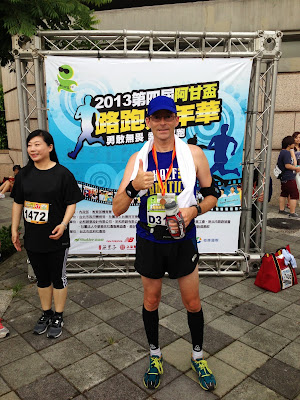 Finisher's metal is about the size of a silver dollar. 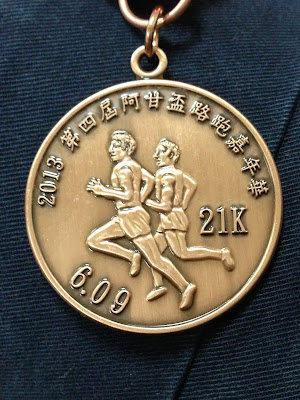 Reward in a can. 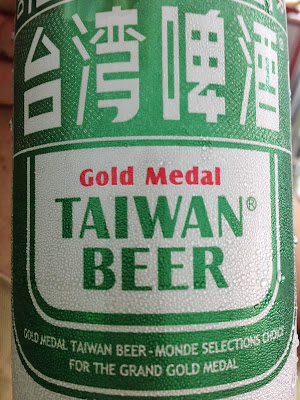 My half marathon PR thus far is 02:00:18 so a 02:13 finish was well received given the hot and humid conditions of Taiwan in early summer. 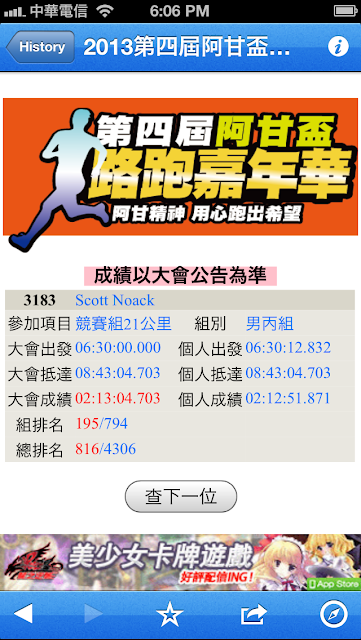 The bowtie loop is represented well below and was very well supported with numerous water stations and restrooms.  For a 'local' non-international race it was professionally executed.  I was surprised by the 1000 ft of total elevation change and I can only assume it was due to the overpasses; otherwise, we were pretty much running along the river bank. 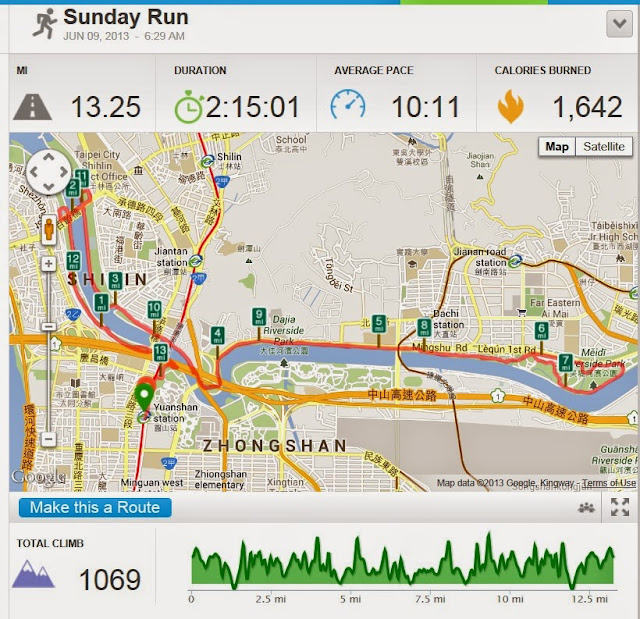